How to Survive if You're Stranded in the Bush

You can never defeat the wilderness. 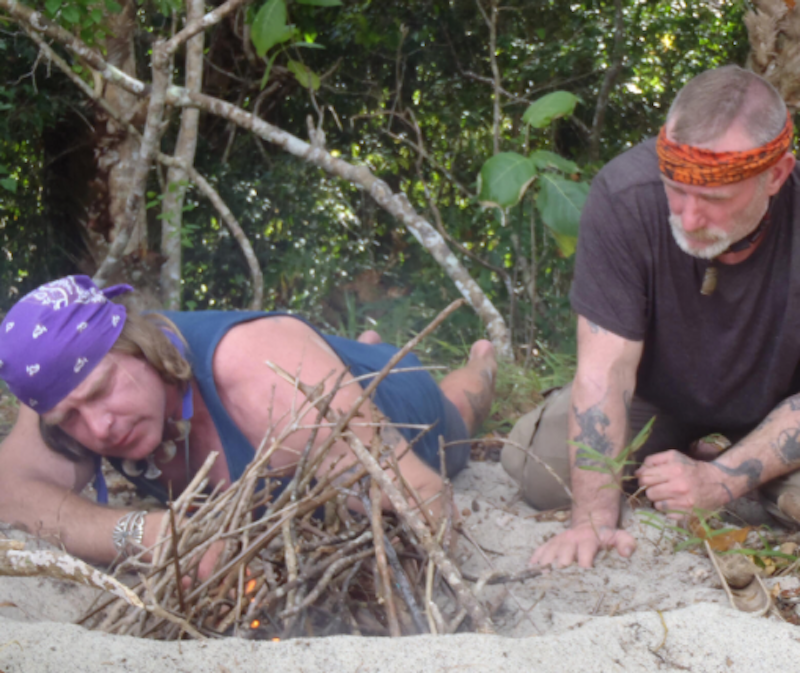 The late Richard Code was a huge fan, as am I, of Les Stroud, the Canadian outdoorsman and survival expert whose TV show, Survivorman, ran for eight seasons on Discovery Channel. The premise was Stroud permitting himself to be stranded for a week in remote, dangerous locations (e.g the Amazon jungle, the African plains, Labrador in winter, a tropical island) with minimal equipment or supplies, and then filming his efforts to survive in terrifying situations, some involving the proximity of what are called "apex predators"—animals that want to eat you for dinner.

The pleasure I derive from watching the program has always been vicarious, whereas Code, a 41-year-old Canadian, ignored the show's disclaimer and set out for the woods near Huntsville, Ontario to mimic Stroud's approach. He was never seen alive again. An aerial search eventually located his body, and doctors determined that he died of hypothermia.

I didn't have to read John Krakhauer's Into The Wild to realize that the last place I want to be is in the middle of nowhere in freezing temperatures, a situation that Stroud doesn’t fear. I'm not willing to put myself in a position where I might have to eat rotten meat, maggots, and rats. My other favorite survivalist show, History Channel's Alone, offers a $1 million prize for outlasting other nearby survivalists out in the wild, but even that wouldn't tempt me to go to a wet place like Vancouver Island and sleep under a tarp for weeks on end.

Reality shows are often staged, so when I first started watching Survivorman, I suspected that Stroud was taking shortcuts, like stuffing his pockets with energy bars, but I researched him and concluded he's legitimate. I feel the same way about Alone. Neither show romanticizes the wild as a place where a man can liberate himself from the shackles of society. Rather, they highlight the stark misery of being stranded alone. There's nothing like watching Les Stroud hunker down for the night in the Arctic in some makeshift shelter to make one appreciate the way they're going to sleep that night.

Bear Grylls impressed many with his survival skills (he once bit off the head of a huge snake to kill it before eating it for breakfast) on his Discovery Channel show, Man vs. Wild, but he liked his comforts. Word leaked out that when he was supposedly surviving in the Sierra mountains he'd spent some nights in a luxury lodge equipped with hot tubs. And while he was "surviving on a desert island," he was actually in Hawaii spending nights in a motel.

I've learned fascinating survival techniques in the many hours I've devoted to survivalist programs, but everything boils down to these necessities, listed in order of priority: make a shelter; locate a source of water; get a fire going; and, finally, find something to eat. One caveat: the priority order may be different in some situations. Some may be surprised that food is at the bottom of the list but, as Stroud puts it, you can go without it for a couple of weeks before it becomes an emergency. On Survivorman, he often spends the entire week eating almost nothing besides a few wild edibles. He said that while filming 25 episodes, he didn't eat anything at all for a week.

While the Alone contestants are allowed to bring a tarp into the wilderness, Stroud rarely has anything that he can use to make a shelter, and he almost never has a sleeping bag. His ingenuity is on display when he fashions a shelter out of various natural materials he can scrounge up. He's sometimes too exhausted from hiking to make one before darkness descends. Stroud says one of the key decisions when you're on the move in a survival situation is to know whether you should stop and make camp, or keep on going. In any situation, he's keen on getting a fire going before retiring for the evening, but rarely has a match. A fire's essential in a number of ways. Besides providing warmth, it allows you to cook meat and fish and sterilize water. You can make tea that provides nutrients with wild edibles. Not to be underestimated is the emotional comfort a fire provides when you're lost and afraid. In fact, preventing your spirits from tanking is more important than finding food in many emergency scenarios in the wild.

Ask yourself what single item you'd want to have if you were stranded in the wilderness. People give various answers to this question; some say an axe, others think it's a knife. I say a Bic lighter. Starting a fire, which is essential, is about the most difficult thing to do in a survival situation, and you don't want to be stuck rubbing two sticks together and hoping for the best.

Outdoorsmen like Les Stroud know they can't defeat the wilderness, because it's always going to be the champion. They've learned that they just have to go the distance with it so they can survive to do it again.