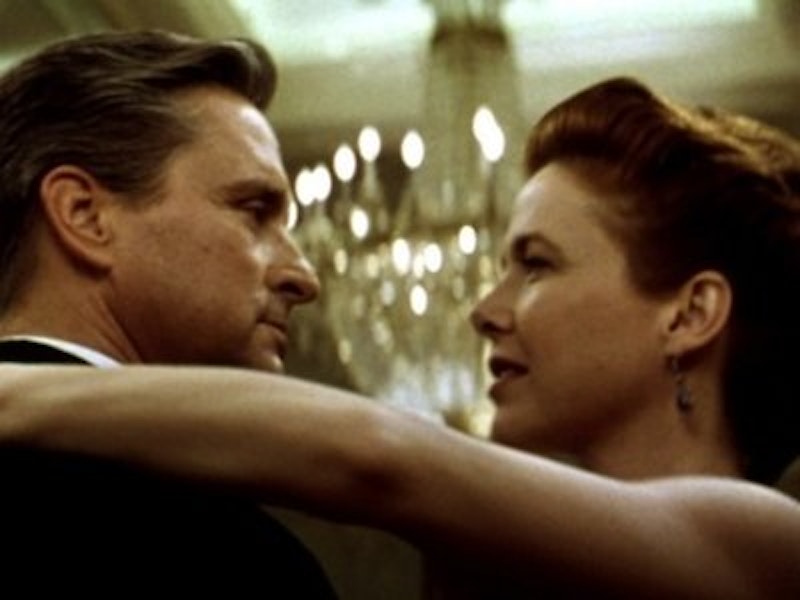 This is the 12th post in a series on political films. The 11th, on Red Dawn, is here.

Romance has a complicated relationship with patriarchy. Many of the most popular romance narratives celebrate powerful men—billionaire Christian Grey in 50 Shades, a wealthy corporate raider in Pretty Woman, Cinderella's Prince and Bella's immortal super-vampire. But while these men are exciting and desirable in part because of their power, they're also loveless, and potentially cruel. The goal of the romance, then, is to humanize them. Humphrey Bogart in Sabrina gets some interests outside of work and acknowledges his affection for his brother; the Beast in Beauty and the Beast is transformed from a dangerous animal monster into a clean-shaven friendly dude. Romance hopes, through love, to make the patriarchy less awful.

The American President (1995) is a classic example of patriarchal romance. Aaron Sorkin's script, a dry run for the West Wing, features Andrew Shepherd (Michael Douglas) as the widowed president of the United States, who starts a relationship with environmental lobbyist Sydney Ellen Wade (Annette Benning.) You don't need to see the film to know what happens; Sydney is swept away by Andrew's patriarchal oomph ("the most powerful man in the world" is used as a double entendre) while Andrew, for his part, is softened and humanized until he's willing to dare political damage for the sake of climate change legislation. Love is not just a personal triumph; it changes the world.

Sort of. It's true that the The American President fulfills its genre topes. But it does so with a certain pro forma dismissiveness. Pretty Woman (1990) really cares about Julia Roberts' character; she gets at least as much screentime as Richard Gere, and the film is, adamantly, about how funny, sympathetic, sexy, and important she is. The story is her story, and Gere is her prize, as much as the other way around. The happy ending is that she gets Gere's power and that he learns from her how not to be such a patriarchal dick. You need two to tango, where "tango" here means "humanize patriarchy."

The American President, though, is oddly uninterested in the second tangoer. Sydney is supposed to be smart, sexy, funny and sympathetic—but the movie treats that as a subplot rather than the main event. The romance is less the focus than the president's work. The pair's trysts are constantly interrupted by national security matters—and the film is a lot more interested in those than in the contours of the supposedly central relationship in the film.

Sydney's friends, milieu, and career are all vague and secondary; Sabrina (1954) spends its first half hour following its title character through a suicide attempt and chef training in Paris before it even gets into the romance. In contrast, The American President sets up its title character's relationship with multiple aides, the context of his reelection bid, grieving for his first wife, and the connection with his daughter, before Sydney is even introduced. She’s provided with a sister/confidante and a few co-workers to chat with, but there's never much pretense that any of those people matter much, or are supposed to.

Sydney lacks narrative purpose. Gere in Pretty Woman, Bogart in Sabrina, Christian Grey in 50 Shades, are all very imperfect patriarchs—which is to say, they're all emotionally stunted jerks. They need romance to become better people. Andrew in The American President, though, is basically a great guy from the start. He's presented as an awesome father; he has close, meaningful relationships with many of his aides. He's kind and thoughtful. Yes, he bombs Libya, but only because he has to, and he feels really bad about it even though he limits damage as much as he can. A president who grieves for the custodial staff of a military facility even before he bombs them to smithereens; what more could you ask of a patriarch than that? You've got to make tough decisions when you're in power, but Sheppard makes them with compassion and thoughtfulness. What's not to love?

The idea that woman can transform men from power hungry jerks into loving partners is pernicious, and you certainly have to give Sydney credit for finding a guy who is rich, handsome, and not a soulless fixer-upper. At the same time, though, films like Pretty Woman and Sabrina are, at least, minimally skeptical of power. The uber-industrialists, the people who rule over us, are not, initially, looking out for our interests. In real life, contra patriarchal romance, love will not turn ugly power structures from toads into swans. But at least patriarchal romance recognizes that those power structures aren't swans to begin with.

Not so The American President. The real romance in the film is not between Andrew and Sydney, but between Andrew and Sorkin—or, more particularly, between Sorkin and his ideal dream of an American president. The clunky Frank Capra name-drop early on is no accident, though Sorkin is perhaps even more starry-eyed than Mr. Smith Goes to Washington. In that film, Jimmy Stewart strode into a corrupt Washington, and had to struggle and filibuster to return the town to its cherished ideals.

But in The American President, there's no corruption. There's just Andrew Shepherd, the good patriarch, with the strength to drop bombs when we need to drop bombs, the compassion to cut emissions when we need to cut emissions, and the rhetorical facility to get the nation behind him with a single speech. How can you possibly resist such a charming, all-knowing patriarch? Why even bother? The viewer of The American President is not supposed to want to change the president. Instead, the viewer, with Sydney, is supposed to gaze upon him with affection and loyalty.  Usually patriarchal romance asks you to fall in love with romance, in the hope that it will soften the patriarch. The American President, in contrast, asks you to fall in love with the patriarch because patriarchs are awesome.