Mention a magic blade and I swell up and fall asleep. 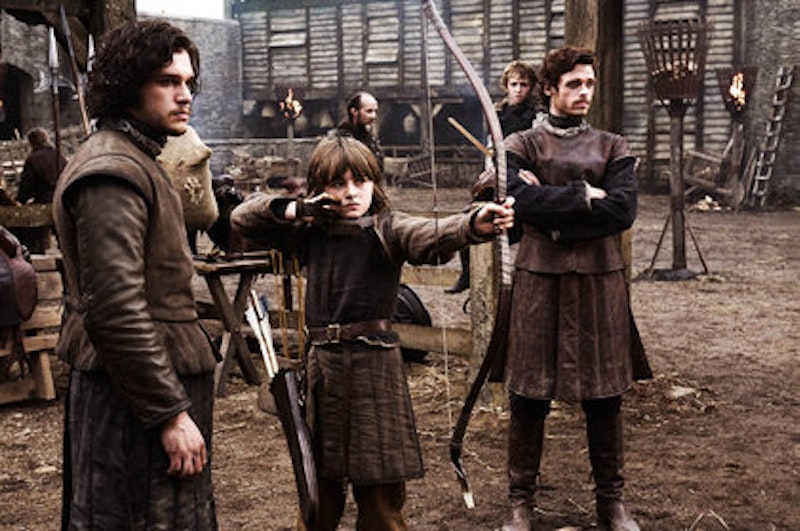 Earlier this week, I admitted that I was the last pop culture critic to see The Avengers. I've been similarly dilatory about Game of Thrones. I did pick up the initial George R. R. Martin novel some years back, but couldn't make it beyond the first couple of pages. I misspent my adolescence reading buckets of fantasy novels, and somewhere back there amidst the Fafhrds and the Elrics and the Kanes and dragons and elves and evil mages, I developed an allergy to swords and sorcery on the printed page. Mention a magic blade and I swell up and fall asleep.

But television's a different medium, and I figured it couldn't hurt to give the series a try. And I did manage to sit through the whole hour. The cinematography (especially the first dramatic scenes on a snowy mountainscape) is substantially more striking than Martin's prose; Sean Bean is fun to watch in a fantasy setting again, even if his character isn't nearly as interesting as Tolkien's Boromir. There are various beautiful people taking their clothes off.

Still, the thump of fantasy tropes falling like broadswords gets a little distracting. The noble, kind-hearted ruler dispensing stern justice; the spunky daughter uncomfortable with a girl's limited options; the adorable animal familiar; the court intrigue; the gathering evil lurking on the edge of the foreshadowing—and, inevitably, the barbaric black Orientalist animalistic violent horde, beyond the reach of civilization or language, performing bare-breasted National Geographic dances for the pleasure of a Genghis Khan stand-in, because, hey, everything outside of Western Europe is all one big undifferentiated savage wad of provocative dangerousness. And even more so if "Western Europe" is "Westeros."

Not that sensationalistic violence and sex is new either; John Ford had the decadent Southerners engaging in sister-brother incest way back in 1629's "Tis Pity She's a Whore." But in the context of a fantasy genre often associated with kids, the gratuitous adult content is less about pandering, and more about validation. This is not some kiddie fantasy series; it's a jewel in the crown of the Golden Age of Television. And the way you can tell it's not Narnia or the Hobbit or even The Lord of the Rings is that it's got prostitutes and penis jokes and lots of explicit gore and general unpleasantness. The adult content makes the show… well, adult. My 10-year-old reads fantasy novels, but not fantasy novels like this.

The default to sex and violence is a depressingly impoverished vision of adulthood—especially considering that fantasy has never had any trouble engaging with adult themes or topics. Tolkien's quiet, painful vision of Frodo's PTSD; C. S. Lewis' anatomization of temptation and corruption in The Last Battle; Ursula K. Le Guin's terrifying, heartbreaking narrative about the inseparability of life and death in The Farthest Shore—or, for that matter, Laura Kinsale's romance For My Lady's Heart, a historical, no-magic-anywhere story about medieval Europe, which is bruising, depressing, violent and sexy, but without GofT's desperate edginess.

It's true that I don't read as much fantasy as I used to. But I think my problem with Game of Thrones isn't that I'm sick of the genre, but that I still, in middle-age, care about it too much. Every flashed breast and eager decapitation on the pilot screams that fantasy, as fantasy, isn't good enough for grown-ups; that you need bare butts and blood if fantasy is going to be a serious genre for serious adults. Maybe the series goes someplace more interesting eventually, but the pilot's lack of imagination, and lack of faith, bodes ill for a fantasy tale.