"Freak Show" is the scariest season yet. 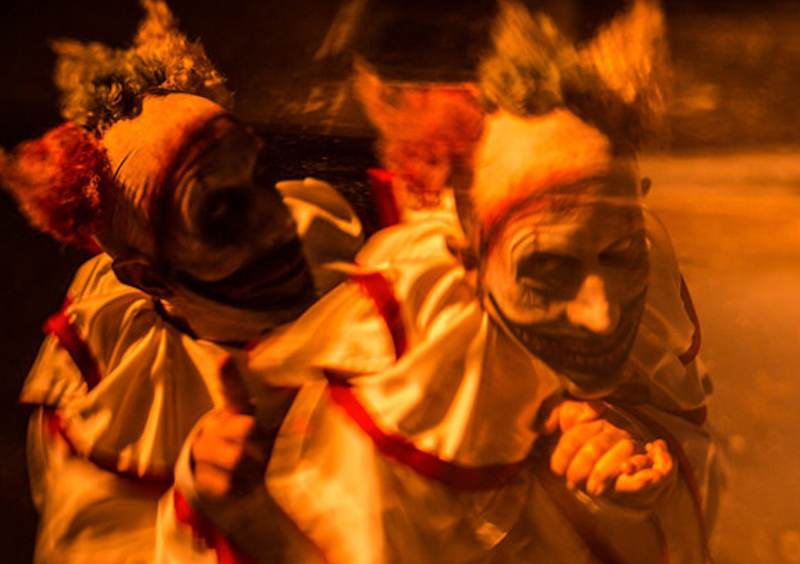 After months of waiting, the hit FX show American Horror Story has returned with “Freak Show.” The season is shrouded in controversy over Ryan Murphy’s casting of real actors with unusual bodily peculiarities blurring the lines between entertainment and exploitation. The premiere episode,  titled “The Monsters Among Us,” ran 90 minutes. This was a nod toward the weird predilections of the “normal” people who discriminate against those in the freak show. Jessica Lange’s character refers to the outsiders as “soulless monsters,” which hints at this season's possible theme—“normal” is the new crazy.

• The episode opens in Jupiter Florida in 1952, as a milkman enters a suspicious residence after discovering that none of the milk he’s delivered has been used. He finds a dead old woman and, I assume, Sarah Paulson, the two-headed woman. When will white people learn not to enter a creepy looking house in horror films? Never? Oh, okay.

• I know this season is going to be the scariest of them all because Florida is the real American Horror Story.

• Meryl Streep’s daughter (Grace Gummer) shows up to serve some candy-stripper reality and is whisked off to the carnival by Lange with the line “Life is for the living.” You said it, sister.

• Lange as Elsa Mars in her fur coat is my everything and I can’t believe this is going to be her last season of American Horror Story. I’m already shedding a tear.

• There isn’t a moment where Paulson doesn’t look gorgeous, and her having two heads as a conjoined twin just means I get to look at her hauntingly beautiful face twice as often. However, I found myself wondering if she got major neck cramps during filming bending her neck each way for extended periods of time.

• As two kids make out on a picnic bench Twisty the clown appears and he's just as terrifying as Ryan Murphy said he’d be. I’ve never seen something on cable television that’s haunted me more. But it wouldn’t be a horror sequence if a girl trying to have sex wasn’t slaughtered. If anyone’s familiar with Carol J Clover‘s "final girl" theory they’d know just how predictable it is that a woman trying to have sex would be the first to get murdered. Also, it’s important to note that only in the state of Florida would a girl even consider her boyfriend hiring a terrifying clown to intrude on their romantic date as a possibility.

• Lange’s accent will take some getting used to, playing a German ex-pat with dreams of becoming a star. She brings Paulson’s character(s) Dot and Bette Tattler to her “freak show” attraction because she believes they’ll be able to pack the house night after night. It’s revealed that Bette stabbed her own mother after she refused to let her daughters leave the house to see a movie.

• No lie: I wanted Evan Peters and me to come up with a safety word when he first came on-screen this season in a leather-daddy get up. Because of his elongated “lobster hands,” he’s a pleasure expert for a bunch of Florida housewives tired of their husbands only having sex with them once a year.

• I had nightmares after the Twisty the Clown stab montage. He sort of looks like Paul Giamatti.

• I have a feeling that Bette, Dot, and Jimmy Darling (Evan Peters) are going to have a romantic subplot this season, which would bring new meaning to the phrase “love triangle.”

• I’m #NotClear on Kathy Bates’ accent in this show. What is it? Southern? French?

• Overall the pilot episode of this season was underwhelming. Only time will tell whether “Freak Show” will live up to its hype. Meanwhile, I’ll wait patiently for my sweet Emma Roberts to make her appearance.

• The highlight of this episode is when Lange sings “Life On Mars” with eye make-up so intense it would make a drag queen proud. Shortly after, there’s a verbal sparring match between Lange and Frances Conroy; the two usually play rivals in this show so it will be interesting to see which one of them will win this round.

• The episode ends with all the sideshow performers cutting up the dead cop and the audience being clued in that Elsa Mars has no legs.