The Jeopardy! Saga and the Soul of America

No one’s worthy to follow Alex Trebek. The show must go on hiatus as we reflect. 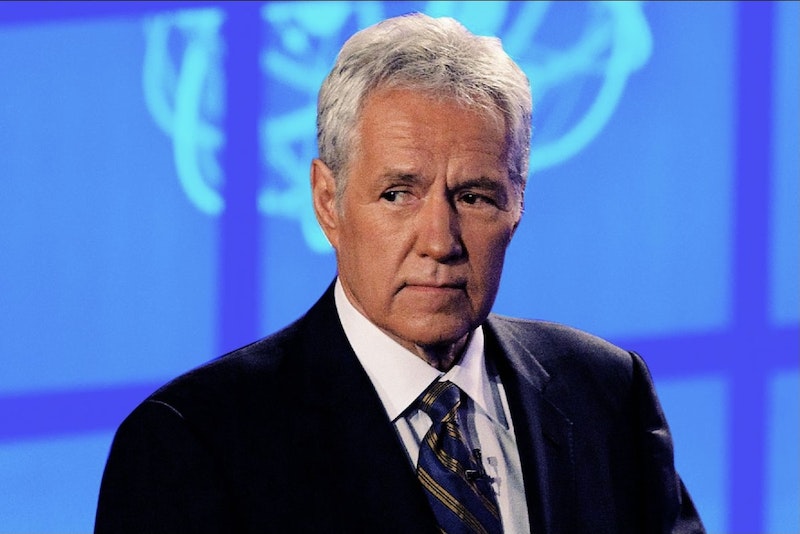 Like so many of my fellow Americans, I’ve done little for the last few decades but watch Jeopardy! But I haven't written about Jeopardy! until now, because (a) the subject hits me so hard emotionally, and (b) because it introduces so many punctuation problems. I hadn't intended to finish my first sentence with an exclamation mark, for example, which is a tasteless way to write a lead. But though my punctuation issues are personal, the trauma of watching Jeopardy! struggle through its host replacement is national, or perhaps galactic.

As many political scientists have observed, Jeopardy! under Art Fleming and Alex Trebek's inspiring leadership has been the only thing holding America together for the last half century (give an important assist to Let's Make a Deal, however). Polls show that the general public mistrusts the media, Congress, academia, and their own mothers, as they should. The only authority figures they really believe in are game show hosts.

The host of Jeopardy! is central to American identity in a way that a mere president hasn't been at least since Chester A. Arthur. It’s an immense responsibility. Children look to the host of Jeopardy!, almost as much as to the host of Family Feud, as a role model, a friend, a saint, a god. In adults this feeling has matured, but is all the more intense for that. And though this responsibility begins with presenting a good head of hair, it ends by defining our very collective identity itself.

Trebek was apparently going to be replaced with Jeopardy! champion Ken Jennings, until Tweets from 2014, kind of ridiculing disabled people, "resurfaced." ("Jeopardy! isn't just a game show," The Wall Street Journal also reports.) Then they announced that they were appointing their own executive producer Mike Richards as host. This in itself damaged the credibility of the beloved institution, as people came to believe the election was rigged. Stop the Steal! they screamed, before ransacking the Capitol, again. This time, of course, they were fully justified. The deaths are regrettable, however.

Then the job appeared to devolve to Mayim Bialek, who had "wowed" in a guest slot earlier in the year and been announced as a host for Jeopardy! primetime "specials." But, though she endorsed Covid vaccinations foursquare, Bialek had revealed in 2012 that her own children were not on a 'normal' vaccine schedule. It turns out that the woman who’s a neuroscientist and plays one on television is a "science denialist," or sort of might be in some respect. Whether she’ll survive these devastating revelations remains to be seen. Unlikely, I'd say, given the precedents.

It’s evident that no human being who’s ever been on social media, or on a blog or podcast, is at this point sufficiently pristine to host Jeopardy! We might have to face up: as a people, we just do not deserve Jeopardy! (I guess I'm alright with ending the last two sentences with exclamation points, though they make this article seem awfully fanatical. But who, I ask you, is not fanatical about Jeopardy!?) The show should be retired until we can reflect. And together right now as Americans, before weeven finish writing or reading this as the case may be, we'd better go double-delete our histories. And be very, very careful about what we say from now on.

Now some asshole might insist that demanding absolute political and moral purity from game show hosts is idiotic, mindless, doltish, and cretinous, or remark that it constitutes notably obtuse and useless numskullery. Such a jerk, consulting Roget's excellent thesaurus, might point out that a culture that’s making its own favorite game show impossible for itself on the grounds that it fails a test for ideological purity, is purblind, muddle-brained, thick-witted, bone-headed, and feeble-minded. They might point out that such a society is vindictive to no purposeand absorbed in trivialities.

Assholes are really such assholes. Alex Trebek and Art Fleming (a war hero and the first man aside from advertising copywriters to say "Winston tastes good like cigarette should") are looking down on them in disappointment. We owe it to these exemplarsto make a cleaner, brighter world, a world worthy of Jeopardy!'s second (well, third) coming. You might call this a foolish dream, asshole, but we are Americans. We dream big.