What’s most shocking about The Power of Kangwon Province, Hong Sang-soo’s second film, is that the camera never moves. 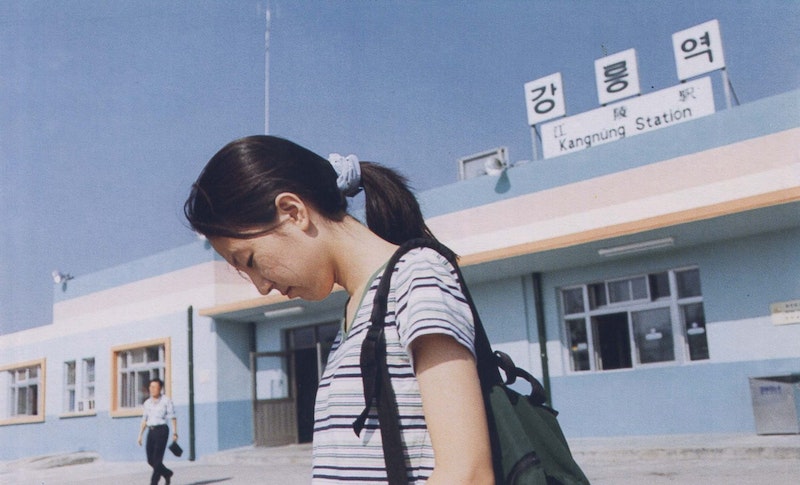 No one has weathered the transition from celluloid to digital filmmaking better than Hong Sang-soo. You can bring up specific technical achievements (The Irishman, Collateral, Tangerine), or other auteurs who’ve managed to make their CGI interesting or at least good (pretty much just David Lynch, but Robert Rodriguez and M. Night Shyamalan can’t be dismissed entirely), or even films made by people that never could’ve made a movie with the prohibitive costs of 35mm equipment—never mind the film itself and getting it developed. To that end, it’s surprising how few filmmakers today have taken an initiative to make considerably more films than they would’ve been able to otherwise. Not everyone’s interested or able to work on anything but a big canvas—that’s fine, but if you need more than a few thousand dollars to make your first movie, don’t hold your breath.

Hong’s preoccupations and scenarios lend themselves to small crews filming “small” stories—almost always, men and women in South Korea eating, drinking, smoking, walking around, hanging out, fucking, fighting, making up, and/or never seeing each other again. He averages around three movies a year, and whether or not he’s “better for it,” his practice shouldn’t be so uncommon. These aren’t hugely expensive stories to shoot on a professional level.

Hong’s “production office” is his office at the college he teaches at in Seoul, and his work in the last decade has embraced aspects of “amateur” filmmaking that repels some: many run only 60 or 70 minutes (Claire’s Camera, Grass, Hill of Freedom), all with fast and sloppy zooms, readymade wardrobes and locations, and actors who are more off the cuff and natural than in other performances (Kim Sang-kyung comes to mind: in Bong Joon-ho’s Memories of Murder, he recalls Brad Pitt in Seven; in Hong’s Tale of Cinema, released the following year, Kim is yet another bumbling bozo who can’t get a date or keep a girlfriend).

Hong’s second feature, The Power of Kangwon Province, was just released on disc for the first time in North America by Grasshopper. Released in 1998, Kangwon Province has many of the totems, tics, and rituals of the dozen or so other Hong films I’ve seen, but unlike every single other one, in Kangwon Province the camera doesn’t move once. At all. Not only that, Hong’s compositions are strikingly different, with a completely different attitude toward the image. It’s almost a show-off movie, because every other shot is completely arresting and beautiful, whether it’s a man smoking on a balcony at sunset, or a woman’s eyes lit by a slit of green light as she lays in bed with the married man she can’t quite shake off.

Without the awkward sex and the Soju, you’d be forgiven for mistaking The Power of Kangwon Province for the work of a different director: the visual style here recalls Antonioni and Joseph Losey, with the camera always canted or hitched high above the characters, an indifferent and unmoving observer—again, without Hong’s humor, this could be a very cold, scary movie. Modern architecture and technology is emphasized constantly in long shots, and characters even kill time talking about the structural engineering of a motorized air-tram. Hong’s camera is as focused on angular architecture as his characters, and here is where he least resembles his current work. Hong’s films are thoroughly unpretentious, despite often involving complicated non-linear plots and alternate reality inversions. In their form—frankly, films that looked tossed off to one degree or another—they humble themselves before the audience.

The Power of Kangwon Province belongs to another world, not only because of its alien eye, but its own emphasis on form: the transfer used by Grasshopper is jumpy in places and marked by spots and scratches in places, though never to its detriment, and obviously this has nothing to do with the film itself. But watching these artifacts pass by, I was reminded even more often of Hong’s unusually static camera, and how much the zoom lens benefits his work. Kangwon Province is very good, and certainly a priority for any Hong fan, but I’m glad he got goofy with it. His stories aren’t suited for the cinematography of Red Desert, and even though Kangwon Province might be Hong’s best-looking movie on a shot to shot level, his personality is still under ice.