There's a lot about Vacation Friends that doesn't look promising. But it’s the best comedy of the summer. A- 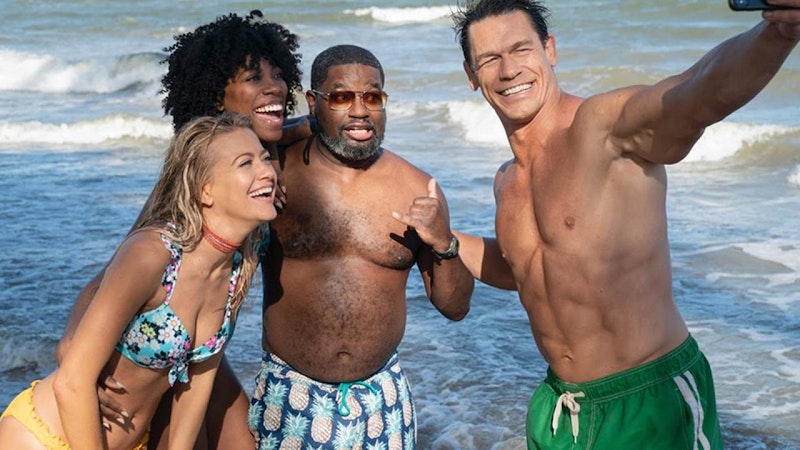 Because John Cena is a large, well-muscled man who’s a former professional wrestler, he's faced pressure throughout his movie career to star in superhero and action-adventure blockbusters. In the last few months Cena has appeared both in the latest Fast and the Furious and recent Suicide Squad reshuffle, and he's set to reprise the latter role in an upcoming HBO Max series.

I think Cena does his best work in comedies—specifically, raunchy, R-rated ones. Two of the best roles of his career were in Trainwreck and Blockers, in which he played, respectively, Amy Schumer's meathead boyfriend, and a bumbling dad obsessed with protecting his teenaged daughter's virginity. To those we can add Cena's role in the new movie Vacation Friends, a comedy romp. After Cena was essentially robotic in the two blockbusters this summer, here he delivers an inspired comedic performance.

There's a lot about Vacation Friends that doesn't look promising. It's been in development forever, with Chris Pratt attached to star almost a decade ago, and later Ice Cube. It's been written and re-written, with five different writers credited in the end, and it's headed straight to Hulu, the last week of August. But it’s the best comedy of the summer.

The film, directed by former Silicon Valley showrunner Clay Tarver, is the sort of raunchy high-concept comedy that isn't much made anymore. It’s also surprisingly versatile—Vacation Friends is a very funny movie in the first half, and a different one in the second.

Lil Rel Howery (the best friend in Get Out) and Yvonne Orji (from HBO's Insecure, and last year's little-seen Spontaneous) play a strait-laced couple named Marcus and Emily, heading to Mexico for a vacation where he plans to propose marriage. After things go awry, they meet another couple named Ron and Kyla (Cena and Meredith Hagner), whose carefree, hard-partying attitude encourages them to let loose. But months later, Ron and Kyla show up at their wedding uninvited, confounding the expectations of Emily's wealthy family.

The movie's first half is anarchic comedy, driven mostly by Cena's manic, wild-eyed performance. Not far behind is Hagner, a dead ringer for the Almost Famous-era Kate Hudson. They're partying, drug-fueled and uncouth, and always have lots of money. If you've been watching The White Lotus for the last six weeks, you might be relieved to experience a visit to a luxury resort that isn't filled with non-stop tension.

Things get more tense later in the movie, at Marcus and Emily's wedding, where this loudmouth, Waffle House-loving couple would stick out like a sore thumb even if they weren't the only white people in the room. There are a few different levels of class resentment going on, as Emily's wealthy family, led by her father (The Wire's Robert Wisdom) looks down on Marcus for working in construction (even though he owns what appears to be a large building company.)

It doesn't all fit together, as various setups never pay off, while there's a bit too much fat in the movie's second act, likely a symptom of that decade of rewrites. A subplot involving a pregnancy feels like a leftover gag from one of the Meet the Parents sequels. But Vacation Friends delivers more laughs than any other movie in memory.