A Defense of Lena Dunham’s Girls

It hits awfully close to home. 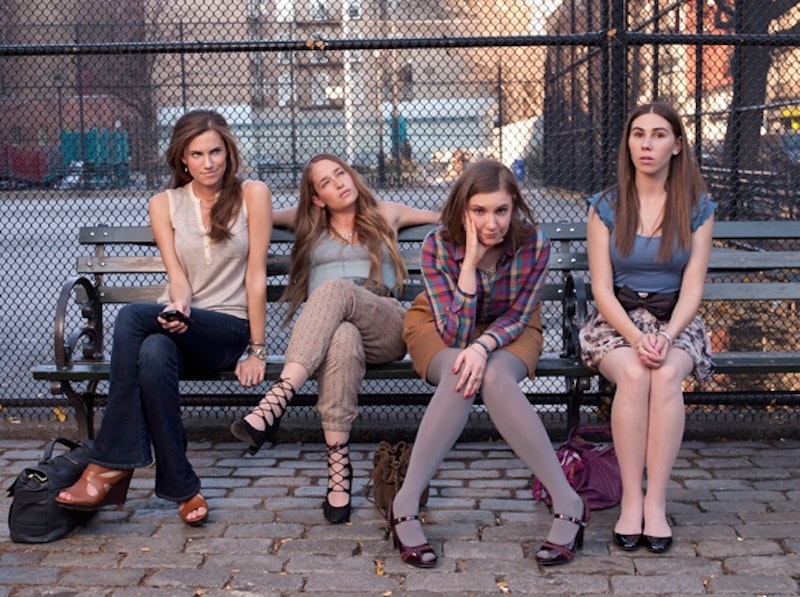 Since the premiere of Girls’ first three episodes at SXSW, the media has showered a tidal wave of praise onto Lena Dunham’s HBO show. If there was a Rotten Tomatoes for television, chances are, we’d be looking at a plump 100 percent rating. Tim Goodman of The Hollywood Reporter wrote that it was “one of the most original, spot-on, no-missed-steps series in recent memory,” while The New York Times’ Alessandra Stanley declared the show, “great comedy… worth all the fuss.”

Of course, Girls has attracted its fair share of detractors, just as staunch as its proponents, if not considerably less influential in the eyes of the press. This is because the resistance stems from consumers, would-be audience members, who preemptively harped on a number of issues Lena Dunham and her show seemed to exhibit. Many criticize Dunham’s background: the recipient of a bougie Tribeca upbringing at the hands of two successful artists, which apparently makes her unfit to portray the role of struggling, Midwesterner Hannah Horvath. (It doesn’t help that her co-stars—Allison Williams, Jemima Kirke, and Zosia Mamet—are all the offspring of wealthy, famous fathers.) They sense that Dunham’s own supposed entitlement pervades the characters’ every pore, resulting in an inauthentic portrayal. A Gawker commenter writes, referring to an outlandish plea Hannah makes to her parents, “If I ever move to New York it’s going to be because I have a job. I would never, ever, ever have the gall to ask my parents for $1,100 a month so I could live in hipster paradise and accomplish nothing.” It’s called satire, people. And it’s also called acting.

Others claim that Dunham has no imagination, noting that Girls is an extension of her 2010 film Tiny Furniture, which was largely an extension of her own post-graduate experiences. Truth be told, they have a point, even if Dunham appears to be a faithful practitioner of “write what you know.” Finally, the majority of naysayers call attention to the lack of minorities, labeling Dunham’s creation “White Girls,” #richwhitepeopleproblems, and the like. How can you have a New York City set-show without even a glimpse of diversity? And the crazed homeless man doesn’t count. Furthermore, why have Hannah’s parents been supporting her for the past two years? Shouldn’t she have been cut off from day one? Slowly but surely, I allowed the opinions of these detractors to overtake my own. Such is the plight of one who spends too much time on the Internet.

And yet, when I actually sat down to watch the show, most of my concerns all but vanished. Yes, Dunham is working with familiar tropes—female friendships, self-discovery, sex, etc.—but the tone with which they are handled is unlike anything I have ever seen on television, or even film. It’s honest. I fall into Dunham’s ideal audience—21, female, New Yorker, on the precipice of my college graduation—so when I watched the pilot, it didn’t feel like I was following the misadventures of strangers, but rather, acquaintances, maybe even friends.

I can’t tell you how many times I’ve used the line, “I could be a drug addict, don’t you realize how lucky you are?” on my parents, when struggling to soften the blow of any life lesson they might bestow. Hannah’s sex scene with her apathetic paramour Adam was excruciatingly uncomfortable, not because of the physicality or slight nudity, but because of what was escaping from her mouth. The desperate attempts to create banter, a rapport, as Adam lunges for her beltline, are all too familiar for most young women my age. My friend remarked to me afterwards, “The dialogue is so real. It’s weird.”

Hannah sleeps and showers with her best friend and roommate Marnie (Allison Williams), while the latter’s stiflingly sweet boyfriend (Christopher Abbott) idles about the apartment like an awkward third wheel. And still, it’s not perfect, as Hannah and Marnie bicker and banter in equal measure. Dunham tacks on another player in this platonic love triangle in the form of Jessa (Jemima Kirke, who stole every second of her screen time in Tiny Furniture), a careless but not so carefree globetrotter. Hannah reveres Jessa for her beauty and cosmopolitan flippancy, whereas Marnie disdains her influence and is altogether threatened by her presence. Perhaps my favorite part of the pilot is when Marnie bursts into her bathroom to confront Jessa—who is peeing on the toilet—after she suggests that the presently opium-addled Hannah should visit her parents and tell them she needs to be an artist. Jessa claims Marnie can’t mother Hannah forever, the two argue about dinner times, and as the scene escalates, Marnie steps back to note of their relationship: “See, this is what you do. You act like I’m uptight, and then I follow suit. I become uptight. It is the most frustrating dynamic on the planet.”

Does the premiere episode have problems? Sure. I could have done without the reappearance of Alex Karpovsky, essentially reprising his droll and sardonic character from Tiny Furniture. The addition of Zosia Mamet as Shoshanna, Jessa’s Sex and the City obsessed, Juicy jumpsuit wearing cousin, just served as a vehicle through which Dunham could poke fun at the inevitable comparisons between Girls and HBO’s iconic series that’s still churning out spin-off films a decade later.

Above all, the honesty of Dunham’s voice, her fearlessness, is incredibly refreshing in the world of entertainment. There’s no romanticizing reality here, no optimistic embellishments. Everything is shown at face value. Yes, not everyone is going to relate, and yes, people will still resent her for her privilege and her narrow range, but for those of you who do see a bit of yourself in Hannah, find a hint of your voice in Dunham, there’s nothing wrong with saying so.