Remembrance of Bleeps Past

A documentary about nostalgia and video games. 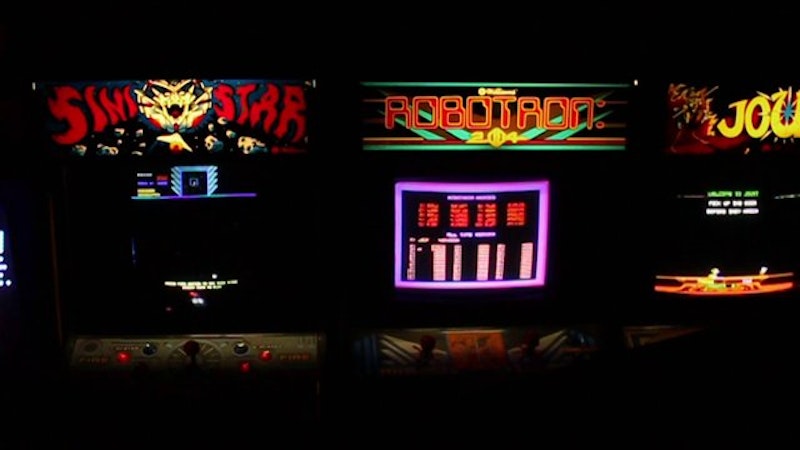 Pop culture is both obsessed with the next new thing and fueled by nostalgia. Arcade video games, as the cutting edge technology of a largely vanished past, capture this contradiction particularly well. Their futuristic once forward-looking bleeps and bloops now signify a particular childhood obsession; bulky low-fi sci-fi bathed in the neon glow of sepia. You look back at them to recapture a future for which you once pined.

Space Invaders: In Search of Lost Time, a new documentary about arcade video game collectors available on VOD, is quite aware of the future-past tension. Many of the collectors interviewed admit that the impetus for their hobby is nostalgia; having an arcade with 30 or 40 games in your basement is a way to remember the now vanished pastimes of youth. It's also, for several collectors, a way to fulfill an imagined future. As kids, they dreamed of having arcade games in their homes, as Ricky Schroder did on the sitcom Silver Spoons. Now they have the disposable income to make that dream a reality, and have even better games than Schroder did. "Fuck you, Ricky," as one collector quips.

As this suggests, conspicuous consumption, and even competitive consumption, is a big part of arcade game collecting. The machines are bulky and expensive; all the collectors here have considerable disposable income and are virtually all white guys. Watching a bunch of well-off dudes sink large volumes of cash into oversize toys is a bit off-putting, there's no doubt. But it’s also an unusually clear demonstration of the extent to which contemporary nostalgia is intertwined with contemporary capitalism. As we've grown to imagine it, the past is largely things we bought. And the nostalgia is for the act of purchasing, as much as for the thing purchased. Arcade games, in their original setting, required money too. Most collectors here recall with a wistful smile hitting the coin return to check for quarters. One talks about using the paper route money he owed the newspaper company at the arcade, until he was $1500 in debt. It's as if all those coins stuffed into all those slots are a down payment. They create a past that can be reclaimed and reaffirmed by a bigger outlay somewhere in the future.

Nostalgia is often crass, but it’s not just that. In one of the film’s more affecting anecdotes, a collector talks about a friend who, he says, was born to play Galaga. The friend had recently died of cancer, but his high score was still on the collectors' Galaga game. The collector mused that he might be forced to sell all his other games, but that he'd never part with the Galaga his friend had played. The bulky, stupid monument to conspicuous consumption is a memento of a loved one, his skill still commemorated on the obsolete futuristic screen, which he can't play again.

In Search of Lost Time is a reference to Proust, who remembered his past upon eating a small cake. Nostalgia, for Proust, was triggered by consumption. That's still the case for us, though what we consume may be different. In the future, the past is made of computers, because they’re what we interact with. At least in our capitalist society, we're all cyborgs, built out of the things we own, or, sometimes, the things we don't own, but wish we did. Like Pac-Man, the collectors here eat their own ghosts, consuming the bytes they were.