The Canyons Lets You Know Other People Are Horrible 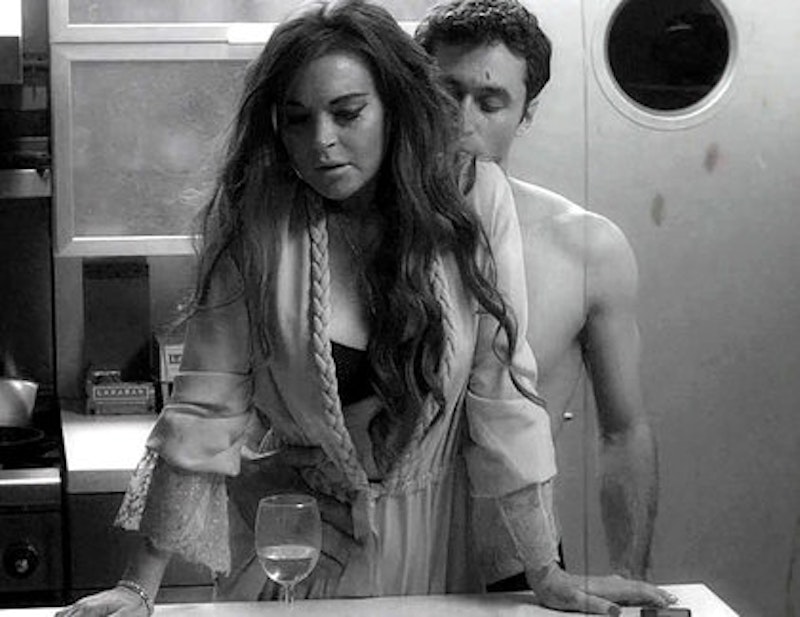 In 2010's Imperial Bedrooms, author Bret Easton Ellis pays lip service to the idea of Los Angelos as a mirage of a city that attracts, uses, and discards young, beautiful people. But while in Bedrooms that concept is a mere plot pillar, it's the core tenet of The Canyons, the film directed by veteran director Paul Schraeder. A favorite media punching bag even before it was released, even before a now-infamous New York Times Magazine profile titled "Here Is What Happens When You Cast Lindsay Lohan In Your Movie," The Canyons is neither as inexorable as wags would have anyone believe nor a deserving contender for any major awards; it's simply a stolid, paranoid thriller about power, control, money—everything one turns to great New Order singles for.

On some levels, the love-triangle plot is a scaled back take on Bedrooms' love-rectangle and coat hanger for ideas, backdrops, and moods: lovingly shot gazes at the seaside citadel where Tara (Lindsay Lohan) and Christian (James Deen) co-habitat and stage orgies, Christian films, via smart phone; varnished white outdoor malls; teeming downtown restaurants and California streetscapes. The specter of surveillance and espionage looms very large here, with the surreptitious switching of phones, an unnamed character whose sole goal seems to be to tail Tara everywhere, the vicious draining of a character's already small bank account, the significance of personal schedules and therapist sessions (another Ellis hallmark, that last), the very willful dissemination of misinformation. Every 10 or 15 minutes or so, the viewer can feel the noose tightening, every emphatic lie that these characters' lives are built upon slowly crumbling to dust. Ultimately it's no shock that someone dies, painfully—the surprise lies in who.

Schraeder walks a fine line between sun-kissed glamour and sheer terror, the promise of stardom and the unwholesome politics of manipulation. The scale of the exploitative circle-jerk at work here is overwhelming, in relief: Tara using asshole film-producer Christian for his bottomless trust-fund, Christian effectively in turn using Tara as a porn starlet by inviting strangers to bang her for his pleasure, yoga instructor Cynthia (Tenille Einshon) using Christian as an imagined beau as Christian uses her as a booty call, Ryan (Nolan Funk) using Christian's assistant Gina (Amanda Brooks) as a supposed beau even as he uses Tara as an ideal beau (and she uses him as an imagined beau, sort of) despite the fact that Ryan's too broken to make her happy, Christian using Reed (Chris Zeischegg), the producer on the horror movie Ryan is cast in, as a pawn to fuck with the affair that Ryan and Tara think they're keeping on the down low, Christian's off-screen father, who keeps him in check via weekly sessions with a therapist (Gus Van Sant, for some reason) that are yoked to his trust fund. The director spends a lot of time on driving close-ups and seemingly staid interiors, which has the effect—interestingly, given the limited resources available for this movie—of shrinking the wide-open spaces of the milieu into what feel like tight, suffocating confines. The movie's sole running gag—Cynthia's Oriental-chic porn crib, with an alarm that erupts in a gaggle of Mandarin whenever somebody enters her gate—eventually deflates into sad shtick, then seems to portend a whirlwind.

The best scene in the movie, interestingly, is the soft-core foursome scene late in the game, where Tara turns the psycho-sexual tables on Christian, goading him into receiving a blowjob from another man while she makes out with the man's partner. Tara cunningly plays on the illusion of trust and fidelity she shares with him to make this happen, and ultimately, the moment winds up less sexy than chillingly potent. At one point during the scene, Lohan gazes into the camera's eye, a smoldering "WINNING!" eye-fuck rebuke to any and all haters watching at home, OnDemand. It's the one moment when she—and by extension, the character she inhabits with all her might—seems truly indomitable.

And whatever else might be said about The Canyons—that Deen's performance is one-note, which it is, but it befits the character; that Schraeder is hopelessly washed up; that Ellis isn't quite human—Lohan is the Alpha and Omega, balling hard in ridiculous make-up, twitching and snarling and dissembling madly and blowing smoke in other people's faces and owning everything and everyone around her. She is amazing to behold, arresting and discomfiting, and somehow manages to make you root for a character who's essentially a failed-actress gold digger. Tara, you realize at the end, will never be happy, and will always be afraid to be alone, and there's the weird sense that her life is a Mobius strip, an eternal reel of disappointment and regret.