A new documentary about working dogs in Iraq leaves out some things. 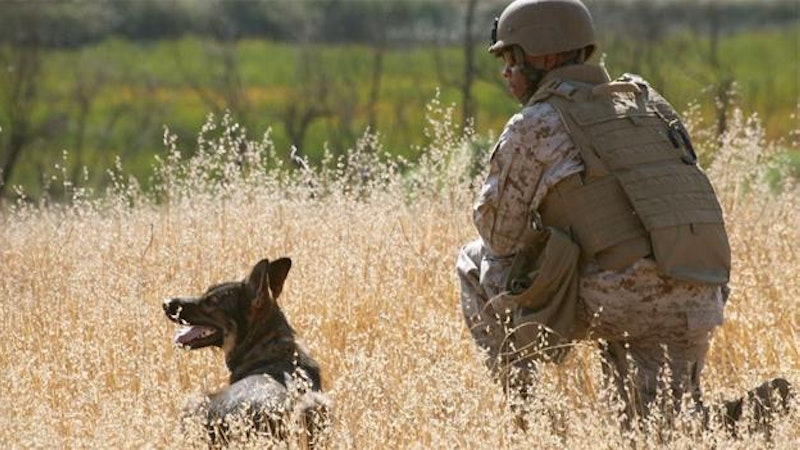 Dogs are better than people. Some might argue that point, but not any of the Marines featured in Always Faithful, out on VOD this week. The film focuses on a handful of military dog handlers before, during, and after their deployments to Iraq during the 2000s. The dogs mostly work detecting bombs, though some are also trackers.

The canines are very good at their jobs; all the handlers have stories about how dogs saved lives, located weapons caches, or identified suspects. But the heart of the film is made not of the work, but of the love stories. One Marine tells about his dog sneaking out of his box at night and stealthily sneaking up to get food off a high shelf, casting guilty little glances at his handler all the time. Another films herself on her tiny bed in the middle of Iraq, just about falling off the edge as she makes room for her furry companion. A third tells a story about going out on a long deployment, realizing his dog was dehydrated, and deciding to carry her back to the truck, lifting her onto his shoulders. And, inevitably, there's the injury story; a suicide bomber blows himself up near a handler and his dog. Both survived, in no small part because the handler refused to be separated from the dog, insisting that they both be evacuated to the nearest vet.

All the handlers have stories about how enthusiastically dogs are received, both by other Marines and often by the Iraqis. One Marine tells how his dog comforted a woman who had lost two Marines in her unit and her grandmother back home in the same week. Another talks about how dogs relieved the loneliness of deployment, not just for her, but also for everyone in the unit. The working dogs don't just save lives; in the midst of a terrifying, dehumanizing experience, they make their handlers more human.

The dogs are presented in the film, and convincingly, as a moral good. They save lives. They spread happiness. They work their hearts out for duty and love. All for a cause which, as is now widely recognized, was misguided in the first place, mismanaged from the get-go, and just plain wrong.

The film never discusses the politics, or the ethics of U.S. actions in Iraq. Indeed, Iraqis barely exist in the movie—there are a few quick images of groups of Iraqi women, a few more of groups of Iraqi men, and then of course the implied off-camera figures firing bullets and leaving bombs. But none of these people become characters, or speaks on camera, or are even named. The dogs are far more individualized, and far more human, than the people the Marines are fighting or, purportedly, saving.

This is not the dog's fault, of course, any more than it's the fault of the Marines in Iraq that they are courageously risking their lives for a stupid President in a stupid war that made no one in particular safer and turned Iraq into even more of a hell than it was before, despite such a thing seeming impossible at the outset. Nor are the Marines we see responsible for how dogs were used at Abu Ghraib.

The dogs at Abu Ghraib aren't responsible for Abu Ghraib, either; they were working and doing what they were told out of loyalty and love, with no malice. Which again, is why dogs are better than people. But one of the reasons people really do suck is that they can take loyalty or love or bravery, whether canine or human, and turn it to such horrible ends. For all its virtues, Always Faithful doesn't want to talk about that. Lying to ourselves by omission is another thing we do that dogs don't.