When Will The Walking Dead Be More Than Mediocre? 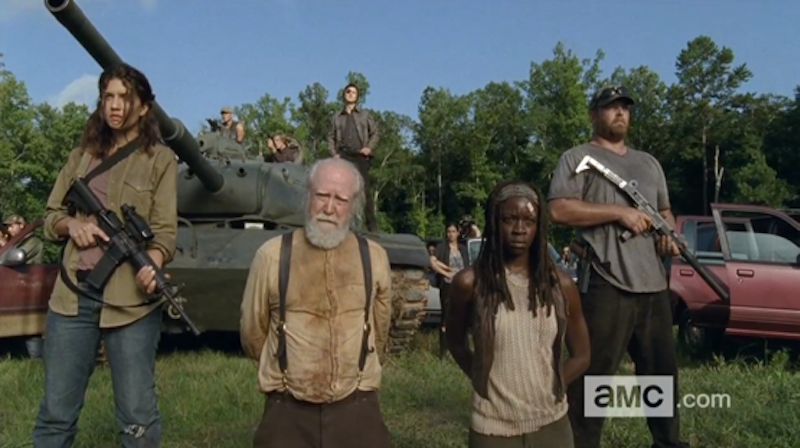 The Walking Dead had its mid-season finale last Sunday, and while the early episodes with its plague epidemic didn't exactly thrill me, the return of the Governor actually won me over for about, oh, five minutes. Maybe it was just nice to have two whole episodes that didn't involve Rick & co., but really I never needed to see the Governor again, and I definitely didn't need another Governor sex scene.

When we last saw the Governor, he'd gunned down most of his Woodbury followers after Michonne had killed his zombie daughter and stabbed out one of his eyes. Since then he's been wandering around, growing a luxurious dumpster beard, half-heartedly avoiding zombies. He stumbles upon a family holed up in a small apartment building, waiting for the National Guard. There's a young girl there who reminds the Governor of his own daughter, and after helping out the two sisters (Lily and Tara) with a few things—including their dying father—he convinces them to hit the road with him. Later, he's saved from a zombie pit trap by one of his old Woodbury soldiers, Martinez, who now leads his own group of zombie post-apocalypse refugees. Martinez invites the Governor and his new "family" to stay and… well, let's skip ahead some, because even the most thorough explanation wouldn't properly get across how nonsensical all this is, the Governor soon kills Martinez, as well as another one of the camp's leaders, and takes charge. No one in the camp questions why a mysterious leather-clad man with an eye patch who showed up only a few days ago is running things now, nor do they have much objection to attacking the prison where Rick & co. are staying—"The people in this prison not all of them are bad, but most of them are thieves, murderers." The Governor takes Hershel and Michonne hostage, and then rides up to the prison's gates on a tank, ready to trade Hershel and Michonne for the prison, or kill everyone should Rick & co. refuse to leave.

Yes, there is the brief hope that maybe they could all live at the prison together, maybe even learn to love and trust one another; Rick's impassioned speech makes Herschel smile, right before the Governor hacks his head off with a sword, at which point the bullets fly. Again, no one from the camp (except Tara) is all that concerned that the Governor just beheaded an old man for no reason, and decide to follow him into a grizzly shootout despite the fact that running down the fences and shooting tank shells through the walls renders the prison totally useless.

In the end, the Governor is dead and Rick & co. are forced to flee in different directions as zombies overrun what's left of the prison, and the audience is left to wonder when, if ever, The Walking Dead will be anything more than mediocre.

Meanwhile, Boardwalk Empire ended its fourth season a couple of weeks ago by killing off Richard Harrow, Jimmy Darmody's half-faced WWI-veteran partner. Richard hasn't had much of a part in the show this season, and really nothing could ever top his all-out massacre of Gyp Rosetti's men at the end of season three, but we did get some nice scenes. Early on he visits his oft-mentioned sister in Wisconsin, later he marries Julia, who's been taking care of Tommy despite a custody dispute with Gillian. Richard has been determined this season to put the gun down—he starts off doing some murder-for-hire work for Carl Billings, but after a couple of episodes finds he just can't pull the trigger anymore. Late in the season, after returning to Atlantic City and finding work as a dishwasher in Chalky's club, he asks Nucky for help: tip off the cops to the location of Jimmy's body—putting Gillian in jail for murder and allowing him, his wife and Tommy to move to Wisconsin—which Nucky says he'll do if Richard kills Dr. Narcisse, who at this point has run Chalky out of town and is deep in the heroin trade. Richard agrees, but botches the job, killing Chalky's daughter Maybelle instead. Afterwards, fleeing the Onyx, Richard is shot by Narcisse's men, and bleeds out under the Atlantic City boardwalk. In the final scene, Richard dreams he's returned safe to his family in Wisconsin, the mask gone, his face whole.

It's a beautiful, tragic send-off to one of the show's best characters, and while I'd argue that Boardwalk Empire is probably the best written show on TV right now, there is a bit of convenience to Richard's character—like Mike from Breaking Bad, who, as Daniel Fienberg once said, "is Superman when [the writers] need him to be." Richard, a crack shot, who kills all of Rosetti's men by himself, decides the best way to kill Narcisse is to hide in the rafters of the Onyx and wait for him to sit down somewhere. That's his plan? Even if he'd shot Narcisse instead of Maybelle, wouldn't his escape have been just as unlikely? Still, Richard's story had come to an end one way or the other, the only question was whether he'd make it to Wisconsin again. At least no one will ever accuse Boardwalk Empire of pandering to the audience.