Apparently Hollywood wants to make a movie about the 44th president before he even takes office. 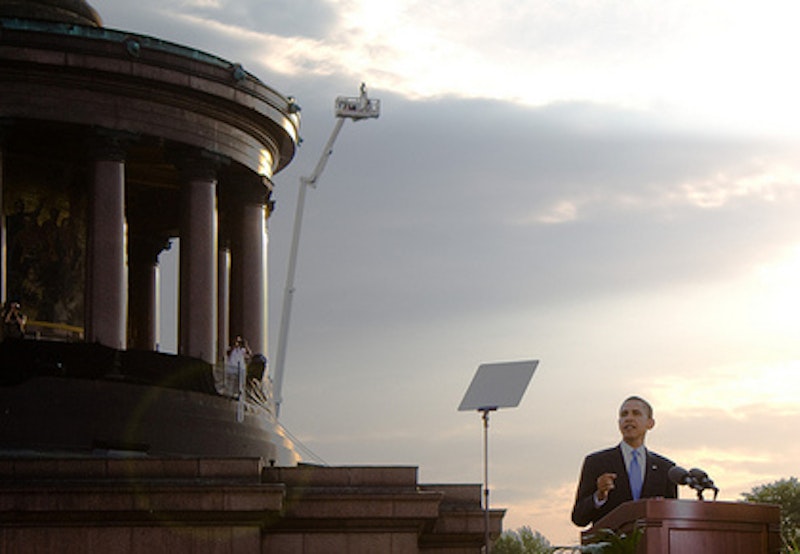 Spike Lee stopped by my office yesterday for a chat. Okay, he didn't come to see me. He spoke to an undergraduate class at Penn about his movies, black film and, of course, sports. At some point while discussing how hard it was for black directors to find funding for movies that aren't Soul Plane or Get Rich or Die Tryin', he mentioned something very scary:

There are several scripts floating around Hollywood about...Barack Obama.

I hope I heard wrong, but I don't think so. Lee dropped that little bombshell when asked if he would ever direct an Obama flick. He wouldn't, he said, because it's already being done. He has other projects in mind, including a planned Joe Louis biopic.

Current events and biopics are great film staples, and audiences are used to seeing presidents on the big screen. Heck, Frost/Nixon is out this week to rave reviews. But the iconic Nixon, a perennial symbol of corruption, is long dead. Sure, there have been many movie Nixons, but it was at least 10 years after his resignation before big movie portrayals started rolling out, and Hollywood released Oliver Stone's Nixon after the former president's death.

Plus, the pillaging of current events has reaped mixed results. The paltry $30 million grossed by Stone's W. proves the senselessness in making movies of sitting presidents. If BoxOfficeMojo is correct, Primary Colors didn't fare much better. The post-9/11 movies have ranged from spectacular to so-so; I have avoided most of them. United 93 had me crying more than I ever have during a film. While I didn't see Stone's World Trade Center (Oliver Stone, what's going on!) and The Great New Wonderful, the latter received solid reviews but the former's were mixed. A truly great 9/11 movie will take years; the event is still too fresh.


Obama is far, far too fresh for a film. Please, hasn't the past year provided enough spectacle and drama! Honestly, any film made about Obama now would fall flat. No actor could match his already boundless persona—t-shirts in Harlem have christened him the figurative son of either King, Kennedy or Lincoln. No director could match the excitement and anxiety of the longest campaign in history. All the events, both petty and weighty, are too ripe. Indeed, I've spent hours on YouTube reminiscing over dozens of countdown and reaction clips from election night. They're riveting, more raw and visceral than any blockbuster could achieve at the moment. How can a film beat The View the day after, when Sherri Shepherd cried over being able to tell her son he had "no limitations"? Or journalist Keli Goff explaining on BET how her grandmother and mother picked cotton and got spit on but now get to see the country elect one of them?

It is now officially cliché to say the story of Obama's candidacy is so improbable "it would be laughed out of a Hollywood pitch meeting for its sheer degree of incredibility," as New York Magazine wrote after Obama's grandmother died a day before the election and after Obama subsequently shed his first public tears (narrative symmetry with Hillary letting it rip before New Hampshire). See all this drama? Best to wait until the end of an Obama movie is not his election but his accomplishments—and failures.

Hollywood: be wise, follow cliché and laugh all Obama film projects out of the room, at least for the next 25 years. That's how long it will take for the sheer grandiosity of the event to distill. Then you can go crazy, as I'm sure you will.