Two recent releases, one out today, show what great cinematography can do for silly material. (Grades: B-/B-) 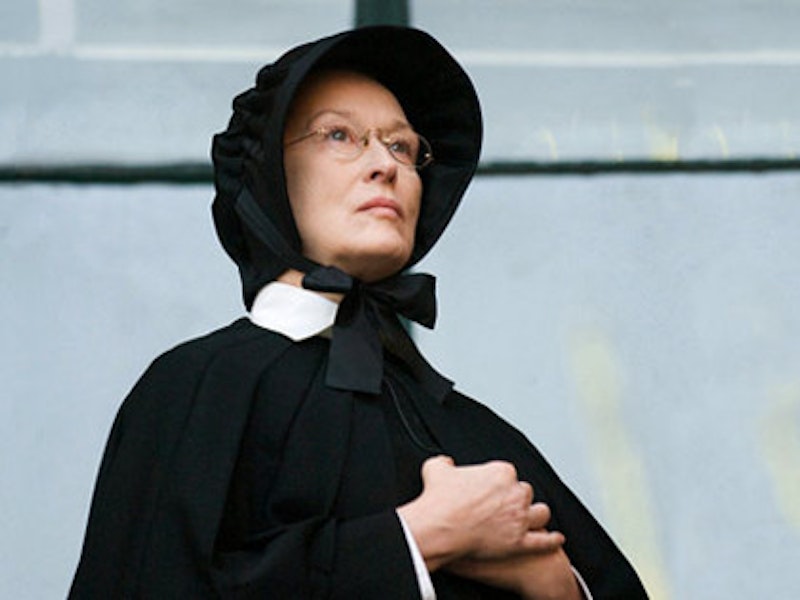 John Patrick Shanley’s Doubt, based on his own Pulitzer-winning play, is a quintessentially “literary” movie, one that offers a handful of well-modulated character complexities and serious issues, plus a couple of meaty scenes for capital-A Acting. Shanley’s direction is sure-handed and doesn’t relish the big show-offy moments too much, but there’s a point when Doubt gets undermined by its own stuffy artiness. Its two most redeeming qualities—typically incredible work by Amy Adams and cinematographer Roger Deakins—cover up the actorly fussiness for a while, but pretension finally prevails.

Doubt concerns a possible sexual abuse scandal at an Irish-Catholic day school in the early-1960s Bronx. Head Priest Father Flynn (Philip Seymour Hoffman) befriends Donald Muller (Joseph Foster II), the first black student in the predominantly Irish and Italian school, but Sister James (Amy Adams) suspects the worst after Donald returns tearfully from Father Flynn’s office one afternoon. She informs her superior, Sister Aloysius (Meryl Streep), who, for reasons never made entirely clear, goes on the warpath to have Flynn removed from the school. Sister James, who’s sweet to the point of seeming naïve, is then begged by both sides to agree with them as to the priest’s wrongdoing.

Observe Shanley’s Drama-in-a-Box construction: Three characters, all of whom fit equally well into types (good and evil on the sides, innocence in the middle); a self-evidently Important, Topical issue in the priest-scandal drama; requisite second- and third-act character complications (Sister James’ brother gets sick, it turns out that Donald is gay and has an abusive father); and some overwrought metaphors like changing weather and a lightbulb that keeps going out.

This kind of thing probably plays better in the theater, where the darkened live intensity of performance can animate such obvious material. On screen, Doubt feels pretty lifeless. Streep once again shows her facility with regional accents, but we’re given no insight to her character, just the thematically relevant information that she’s kind of an old maid, afraid of letting her school adapt to the changing cultural times. Viola Davis, who plays Donald’s mother, has a single-scene cameo that feels progressively like something from the Overacting Negro Ensemble due to the domestic toil Shanley’s script foists upon her. And Hoffman, who once showed unbelievable range from role to role (he made Boogie Nights, The Big Lebowski, and Magnolia in consecutive years, playing wildly different characters) has jettisoned that quality since ascending to leading-man status. Post-Capote, he seems to approach every character with deep contempt, and Flynn is no exception. We side with Sister Aloysius at first not only because contemporary audiences are hard-wired to look askance at priests this way, but because Hoffman plays the character with the same heavy breathing and menacing smirk that he brought to last year’s execrable Before the Devil Knows You’re Dead. Even if he’s not touching them, this isn’t a guy you’d want around your kids.

Roger Deakins’ beautiful camera work is the main reason for sympathy here; he’s able to find the stately, nostalgic beauty in the cream-colored hallways and stained wood trim of the Catholic school, and he knows how to photograph faces (particularly Adams’ nuanced one) in a way that captures the implications of a raised eyebrow or a quivering lip. Like his equally impressive work in the forthcoming Revolutionary Road, the cinematography in Doubt is as important to the actors as the script. If only Shanley’s heavy-handed screenplay were as capable of capturing his characters’ inner thoughts.

Wong Kar-wai stuck out in mid-90s Asian cinema because of his rejection of action and martial arts in favor of pop-infused emotional epics. His breakthrough film Chungking Express (recently reissued by the Criterion Collection) is a formally innovative exercise in romantic desperation and redemption; it’s as emotionally satisfying a movie experience as I can remember having, in no small part due to the rushing cinematography of frequent Kar-wai collaborator Christopher Doyle. Chungking is an amusement park of pop music and cinematographic tricks, like a Hong Kong Mean Streets without the violence.

Since that film, Kar-wai has become an international sensation, and his endearing but befuddling response has been to go back and retool his first film, Ashes of Time, which is thus far his only foray into the martial arts genre. Ashes of Time Redux is gorgeously shot by Doyle, but it’s mainly useful as a historical document of the collaborators’ nascent style. They use slow motion to heighten emotional moments, as they would perfect later in In the Mood for Love; and like in that film, a repetitive, pulsing score plays in the background at nearly all times. But the story’s labyrinthine mind games and meditations on memory feel overbaked and distracting; you keep waiting for the sword fights. And while the montages and cross-cutting of Kar-wai’s later films are perfect cinematic representations of his characters’ experience, they seem too arty by half among the sweeping desert locales and pulpy assassin tale of Ashes. The movie is obtuse and elliptical where Doubt is overly explanatory, but they’re both stylish mush.