The 7 Most Sorkin Things About the Chicago 7 Movie 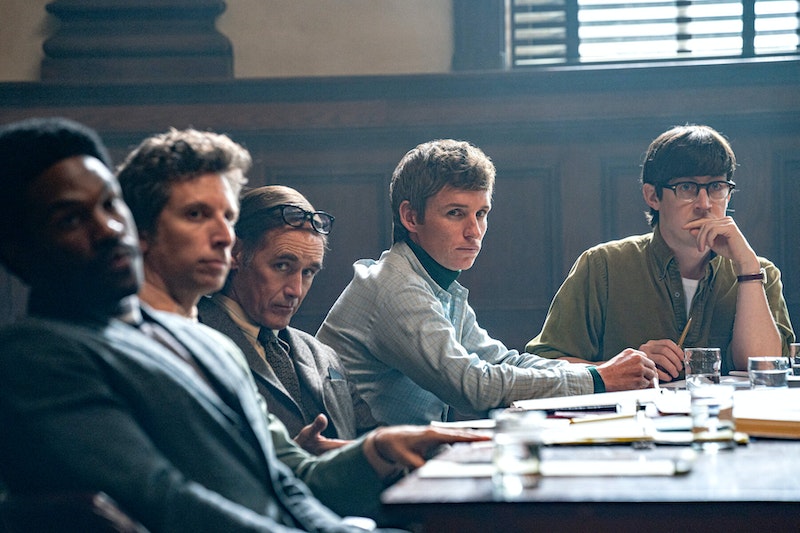 A guy slams his fist into the wall on some syllable in a longish word during a tirade. Well, more of a comeback really, not a tirade, but he uncorks a zinger and, bam, that sentence gets accentuated: “It is a-ston-ishing to me that someone still has to explain that to you.” The guy’s Tom Hayden (Eddie Redmayne) and he’s arguing with Abbie Hoffman (Baron Sacha Cohen) about elections. They were going low and intense with the delivery, whispering at each other in opposed close-ups, and then— Hayden up loud with “It is a-ston-ishing” (whap). It’s the big release, the uncoiling whiplash.

“‘Jive dou-ble lip talkin‘ Nixon,’” says Bobby Seales (Yahya Abdul-Mateen II), breaking into a detective’s testimony; the detective’s purporting to quote him. “You make me sound like one funky cat,” Seales says. There’s half a minute of other dialogue. Then, to himself: “‘Jive double lip talkin.’ Funky, funky cat.”

“You don’t know what to do with the egg now, do you?” Abbie Hoffman to Jerry Rubin (Jeremy Strong), who’s just caught an egg that was flipped at the pair of them by somebody in the crowd. Abbie and Jerry are striding side by side through the courthouse lobby as the noise swirls and the cameras flash. Through the confusion, we have the sudden attention grabber of the thrown egg. Jerry catches it, as an adroit Sorkin man of parts might do. But he and Abbie still have a long way to go to the courtroom. Meanwhile, he’s stuck with that egg and Hoffman ribs him. In short we see that Rubin’s the kind of dorky one, Hoffman’s the undoubtedly cool one, and that Sorkin, who loves a twist, has put a twist on the dramatic catching of eggs by shifting to realism for a moment.

“It’s a revolution, Tom. We may have to hurt someone’s feelings.” That’s Abbie Hoffman doing a zinger-deflator in heavy-litotes style, as also deployed in The Social Network by its version of Lawrence Summers (“I was the U.S. treasury secretary. I’m in some position to make that call”).

Then back to the bar. “A buckeye is a nut,” says the buddy. Boom, the bar’s plate-glass window falls in; the cops and demonstrators are here.

“You do this. [To room:] He does this. It’s a pattern. Read his poah-shin of the Port Huron Statement. He implies possessive pronouns and uses vague noun modifiers.” That’s Abbie Hoffman springing a late-movie turnaround to get the team out of a fix. He and Hayden have been squaring off all through the movie, but now it’s Hoffman who determines that Hayden didn’t actually call for cop blood to be spilled. “‘Our’ blood,” Hoffman says, or “Ow-uh.” Hayden meant the protesters’ blood, so his speech to the protesters hadn’t been calling for violence, just for wider public knowledge of the head-beatings then being done by the police. (Cohen’s Hoffman accent is the kind of accent that made people take Meryl Streep for granted during the ’80s. It’s so fully rendered that it’s embossed and seems other than human. “Now heah’s wheah things got weeyu’d,” he says. He also says “pock,” as in “We have to get where the convention is. And that means we leave the pock.”)

After Hoffman’s breakthrough, a quiet exchange between Hayden and his old foe: “You read the Port Huron Statement? “I read everything you published.” “I didn’t know that.” “You’re a talented guy. Except for the possessive pronouns and the vague noun modifiers.” Pause. Hayden to team: “Put Abbie on the stand instead.” They’d been arguing before about which of them would give the key testimony in tomorrow’s session. This is how that business gets resolved.

Fifteen minutes into the movie, we see Rennie Davis (Alex Sharp) writing in a notebook as he sits in court.  He tells Hayden he’s keeping a list of all the U.S. servicemen killed since the two of them got arrested. An hour and 41 minutes later, Hayden puts the mean judge on the spot for the movie’s climax. He does so by reaching in front of him and picking up the list, which he then proceeds to read aloud. We’d all forgotten it was there! Davis is a bespectacled, hunched, sit-him-in-the-corner sort, typically getting lost sight of as everyone makes noise. But he holds the key to it all—the veterans’ names. The courtroom stands for the dead veterans, or all the good characters do. The judge loses control of his courtroom and looks like an ass. Everyone’s smiling with their head tilted as they applaud Hayden. Except Jerry Rubin. He’s looking down at his hand. The palm opens. The egg! Now he smiles. The music comes up.