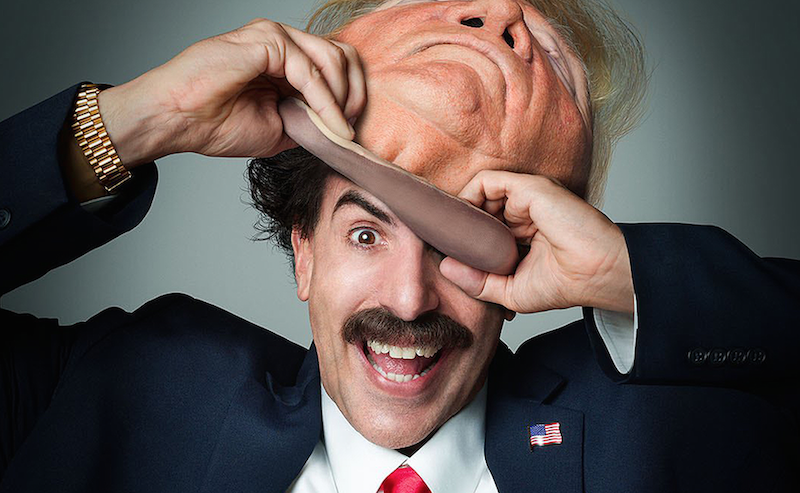 Throughout the Trump era, some smart minds have tried to execute political satire that's up to the challenge of these ridiculous times. Most have failed. But now, it's Borat's turn at bat.

Now, after a Showtime series a couple of years ago that tried to transfer the Ali G Show magic to a quartet of new Baron Cohen characters, Borat’s back. It's a new movie that was shot in secret over the last year, and drops everybody's favorite fake Kazakh into the Trump/COVID era.

The film, officially called Borat Subsequent Moviefilm: Delivery of Prodigious Bribe to American Regime for Make Benefit Once Glorious Nation of Kazakhstan, arrives on Amazon Prime this Friday. Baron Cohen has joined with director Jason Woliner—sitting in for his usual collaborator Larry Charles—and a team of eight credited writers for a very funny film that impressively updates the Borat M.O. for the world of 2020.

The gags are hit-or-miss, but the new Borat movie gives you most of what you want from a Sacha Baron Cohen project: Superlative physical comedy, humor that crosses lines in terms of both ribaldry and ethnic mockery, hilarious bits involving people secretly filmed, and interviews with well-known politicians that were set up under false pretenses.

The conceit is inspired. Borat has been imprisoned in Kazakhstan since the time of the first movie, which was released and brought great shame upon his country. But Borat is then asked by Kazakh president Nursultan Nazarbayev to carry out a mission. Borat is to return to the United States, in order to deliver a bribe, in the form of a monkey he's to present to Mike Pence. But Borat's daughter, Tutar, has snuck along as well, with dreams of reenacting the life arc of Melania Trump.

I always thought a Borat sequel wouldn't be possible, for the simple reason that everyone would recognize him. But he wears a series of disguises for public appearances, so it's Sacha Baron Cohen playing Borat playing other people.

The plot takes Borat to CPAC, where he dressed as the President and interrupted Pence's speech, and to a fringe political rally in the Pacific Northwest, where he got a crowd to sing along to a song with such lyrics as "chopping up journalists like the Saudis do." He also meets in a synagogue with a Holocaust survivor, in an uncomfortable bit that's led to lawsuit threats from the woman's family.

The actress playing the daughter is variously credited in press materials as "Irina Nowak" and "Maria Bakalova," but whatever her name is, she gives a go-for-broke performance. And despite jokes throughout the movie implying that she's underage, the actress seems to be in her mid-20s. In one of the sequel’s better choices, she begins the film living in stables, but over the course of 90 minutes, she slowly turns into Tomi Lahren.

There's an appearance by Rudy Giuliani that's cringe-inducing, even by recent Rudy standards. Interviewed by the daughter character, in disguise as a TV journalist, Rudy starts off by cycling through some ridiculous conspiracy theories about the virus and China, and it gets worse from there.

Baron Cohen's team is very good at getting past security, and especially at assembling fake correspondence that politicians easily fall for. The ending is perfect, and possibly the smartest bit of comedy that's inspired by the events of 2020.

The pre-election release date probably wasn’t necessary, since the film doesn't really land any unique punches on Trump or unearth anything incriminating, unless you were on the fence up until now about whether or not the President's personal lawyer is sleazy. But what the second Borat film does do is provide lots of laughs, and a potent snapshot of America in 2020.