Like Lena Dunham and Jonathan Franzen, July’s masochistic relationship with the media has overshadowed her work. 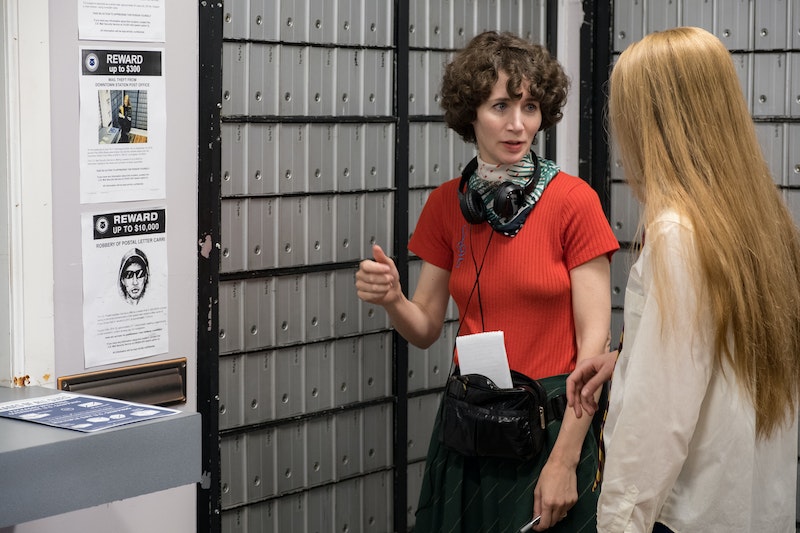 Miranda July and Evan Rachel Wood on the set of Kajillionaire

Miranda July, like Lena Dunham and Jonathan Franzen, has a masochistic relationship with the media. These are media personalities who also happen to make art, but no one remembers a line of Freedom (a great book), they remember Franzen’s smug dismissal of Oprah Winfrey in 2001, or his attempted adoption of an Iraqi orphan in the mid-2000s. That is if they remember Franzen at all (I wonder he’s been working on these past seven months, beyond birding).

Lena Dunham’s interviews, public comments, appearances, and political endorsements are a body of work comparable to her series Girls. Whether you consider her relationship with the media, one of ritual public humiliation, as profound performance art or puerile rich kid bullshit will color how you watch her work. For all of Dunham’s gaffes and stunts, she’s an artist willing to go out on a limb, using herself as a battering ram. So many otherwise ordinary moments of Girls are riveting because Dunham’s so unpredictable and uninhibited.

I only saw July’s Me and You and Everyone You Know this summer, and after 15 years of hearing about treacly and insufferable her work supposedly was, I assiduously avoided it. Comparisons to mumblecore, even by proxy, were enough to send me darting in the opposite direction. All of those movies were awful: Joe Swanberg’s Drinking Buddies. Andrew Bujalski’s Computer Chess, and especially the Duplass Brothers’ Baghead. Even Dunham’s first and only feature so far, Tiny Furniture, can’t be redeemed. So a “movement” had to be born, and good movies got dragged down by association. Idiosyncratic but otherwise un-categorizable films like Frownland, Wobble Palace, Beach Rats, American Honey, and Daddy Longlegs have been dumped into the same bin of cultural consciousness as Frances Ha. This is criminal.

When I finally watched Me and You and Everyone We Know, I was surprised by how much I liked it. Not great, but very good, with the rare combination of fish tank artificiality and a beating heart. So many have called July “pretentious,” including Splice Today’s Stephen Silver in an earlier review of her new film Kajillionaire. I understand—the line is so thin here—but in her first film, she not only presaged but outdid all of the mumblecore and Tumblr inspired work that followed in the next decade-plus. It’s a genuinely weird movie that never feels pretentious or cold, but fuck me running if I could tell you what’s going on inside July’s head! I mean, shitting in a frying pan? Performance art was better when blood, nails, and a Chrysler where involved.

But throw out all received wisdom and opinions about Miranda July. Kajillionaire is a surreal widescreen American mosaic. I wish I could’ve seen this in a theater, not only for its transfixing anamorphic cinematography by Sebastian Winterø, but just to be trapped in this planet. The world of Kajillionaire is far more abstracted and removed from reality than Me and You—so much so that it often looks like animation, if only because the staging is so balletic. All of the performances are remarkable: Evan Rachel Wood, Gina Rodriguez, Richard Jenkins, and Debra Winger lead the cast as a misfit group of socially dysfunctional and nearly pre-verbal burglars. They don’t rob banks that much, they just break into P.O. Boxes, convince people to let them into their homes so that they may steal the checkbook, and so on. Cash is hoarded, but no goal beyond becoming “kajillionaires” is every established.

July’s vision of America is so disturbing, a candy-colored nightmare that warps the realism of American Honey’s comparably modest square depiction of this country in decline. In both films, people walk listlessly through deserted shopping malls and office parks. Winger and Jenkins are Wood’s parents, but they’re all so emotionally and socially stunted that Rodriguez just assumes Wood found some insane old people to go in on a gang. So much under fluorescent lights, so much bad food in ugly places, so much money collected and spent for nothing. No one is happy in this movie, until the end when Wood and Rodriguez kiss passionately in the basement of a wholesale department store, having just scored $525 in returns. The camera dollies back as they kiss for the first time, and we cut to black.

It’s an optimistic ending in an otherwise broadly unsettling film full of resentment, dysfunction, and disappointment. There’s no future here, and no way to express love or summon the energy to do anything of any value or meaning. Money’s out there, but so what? July’s happy ending isn’t forced or phony at all—these people are kissing beneath crumbling tombs of American consumerism. They’ve found love in a hopeless place.