Terrence Malick's To The Wonder Is A Total Flop

Bad plotting and shallow characters don't make for much. 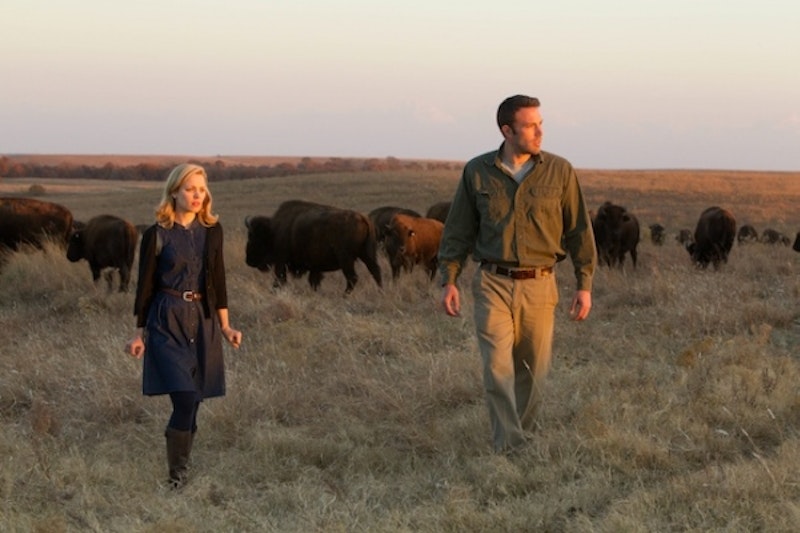 Terrence Malick's career could have ended triumphantly in 2011 with the release of his cinematic meditation Tree of Life. The film, part love letter to the American heartland, part European drama, felt like a work worthy in substance and style to the late Russian director Andrei Tarkovsky. However, Malick's career did not end in 2011 and his latest film To The Wonder does nothing to add to his legacy.

The film immediately seques into a sequence of rapid edits which lay out the evolution of Neil (Ben Affleck) and Marina's (Olga Kurylenko) courtship. Neither character says much and arguably that's one of the greater virtues of the film. The cinematography captures the chemistry between the two. Neil and Olga are unable to forge a substantial relationship beyond their moments of embrace and mutual lust. Malick must have felt that he hadn't sufficiently covered this theme in Tree of Life. Wonder's sole propulsive element, the whispered narration over ambient soundtrack, feels uninspired rather than functional.

Contributions by cinematographer Emmanuel Lubezki is the only reason the film is watchable at all. In a key scene, Neil and Olga wander among a field filled with Oklahoma bison. Any number of symbolic interpretations can be drawn from the scene and are indeed important to decoding the narrative. However, the way that Lubezki captures the stillness of the creatures, and the glint of sunlight in their eerie eyes, paints a much more unsettling portrait than Malick could have intended in his script. As the audience is guided through countless Oklahoma landscapes the movie seems to wake from its coma.

Arguably, had Malick drafted stronger histories for his characters the performances in Wonder would have been more substantial. Father Quintana (Javier Bardem) is losing his faith but the audience never knows why. He closes the blinds in his house and stops taking visitors outside of Mass. As Neil, Affleck gives an even more stoic performance than Brad Pitt in Tree of LIfe. Pitt's character, however, had depth, a fiery character whose rage was only subdued by his love of classical music. But Neil is a character without personality, existing only to assume the consequences of his own indecisions. If Malick decides to release his next film as a bookend to this potential trilogy, he may want to scale back the existential prophesying. Even the most patient art house audiences need compelling reasons to dislike insubstantial characters and plots.