42 Is a Well-Crafted Homage to Jackie Robinson 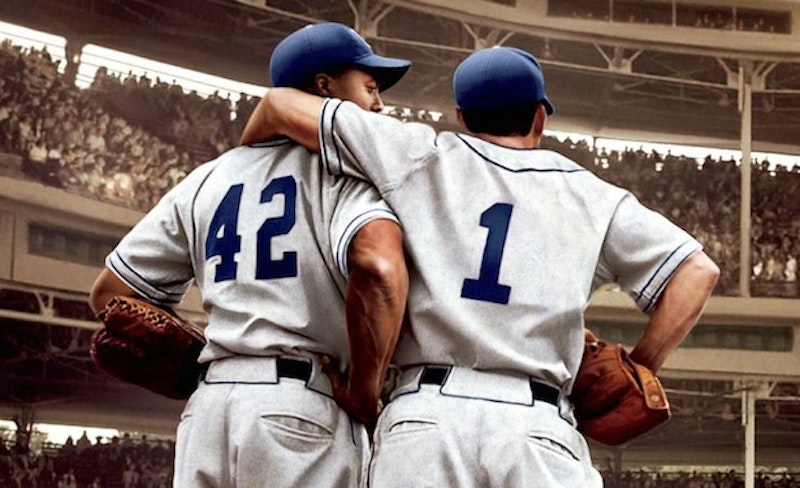 I saw 42 last Friday with a friend. We went to one of those fancy new age theaters with a full service bar in the lobby designed to use cheap beer to soften the blow of the exorbitant concession prices. It worked. After downing a $4.50 Sam Adams I didn’t blink at the $4.45 price on the Reese’s Pieces. It was dad’s night out after all.

We sat in the bar for about 30 minutes as the clock ticked towards the 9:55 PM start. The bar had two TVs; one tuned to the Braves-Nationals game in D.C. and the other airing the Orioles-Yankees tilt at Yankee Stadium. My friend Jason, an avid Phillies fan and prototypical Philly sports fan in general, openly voiced his hatred of the Nats. I eagerly pointed out that just a few years ago he could never have imagined that those words would cross his lips. I mean really, who cared about the Nats as recently as 2010? He agreed and returned to wishing bodily harm to Bryce Harper as the O’s game drew my attention. The Yanks had loaded the bases with two down in the bottom of the seventh inning. I breathed a sigh of relief when Adam Jones camped under a long fly ball to center. It looked for a moment like disaster had been averted, but Jones dropped the ball, and three runs scored.

Jason and I discussed our concerns about Harrison Ford’s portrayal of Brach Rickey as the first two Baltimore batters of the eighth inning reached base. Ford’s brief appearances in the 42 trailer are almost comical for his gruff voice and facial expressions. Where have you gone, Hans Solo? With just a few moments left before the start of the film Orioles’ third baseman Manny Machado hit into the most improbable triple play of my recollection; threat averted, Yankees’ lead secured, worst inning of Orioles’ baseball in quite some time. Jason immediately went into some “that’s the beauty of baseball” speech reminding me that the Orioles had registered a stunning ninth inning comeback in Boston earlier in the week. Ordinarily, I’d have acquiesced to his “It all evens out” reasoning but my raw emotions got the better of me. “Shut up Jason.”

I went to see 42 because I’m a baseball dork and it had been a time long since a baseball movie worth watching had been released in theaters. Couple that with the fact that most of the movies I see these days have a corresponding Happy Meal promotion and I was generally excited to be at the theater. I was a bit worried that 42 would fall victim to the plague that afflicts many sports movies—unrealistic on-field action. I was also concerned that Hollywood would underplay the abuse that Jackie Robinson took from his own teammates in addition to the opposing crowds and teams.

My pre-movie concerns were quickly dashed once the lights went out. Ford’s portrayal of Rickey doesn’t come off as nearly over the top during the course of the film as it does in small doses in the trailer. Rickey’s conversations with Dodgers’ manager Leo Durocher (played by Christopher Meloni) deliver some genuine laughs in a film filled with sobering moments. Chadwick Boseman, in addition to being a dead ringer for a young Jackie Robinson, does an expert job of exhibiting Robinson’s extreme public confidence and private insecurities. The attractive Nicole Beharie plays Jackie’s wife Rachel and proves to be the great woman behind a strong man.

Veteran actor Alan Tudyk, perhaps best remembered for his role as Steve the Pirate in 2003’s Dodgeball, is at the heart of one of the most stomach-churning scenes in 42. Tudyk portrays Phillies’ manager Ben Chapman as he hurls a dizzying stream of epithets and racial stereotypes at Robinson as he attempts to bat during a game at Ebbets Field. Chapman is relentless and thorough in his degradation of Robinson. It was the type of scene that needed to be in 42 to make it authentic. It was also exactly the type of scene that I didn’t think would be included in the movie. Chapman served an important function in the plot as he became the face and voice of all the abuse that Robinson endured during that harrowing 1947 season. Tudyk will no longer be remembered for simply being Steve the Pirate.

42 is well done from beginning to end. The crafted storyline features just enough heartfelt moments to pull viewers through the muck of 1940s America without being overly sappy. The on-field action is authentic and realistic. In fact the product was so authentic that at some points during the movie I felt like I was watching an episode of HBO’s baseball documentary When It Was A Game. The other notable aspect of 42 is that they managed to recreate some of baseball’s long gone cathedrals like Ebbets Field, the Polo Grounds, Shibe Park, and Crosley Field with stunning accuracy thanks to an assist from Engel Stadium in Chattanooga. As a sucker for old ballparks this film has my undying devotion.