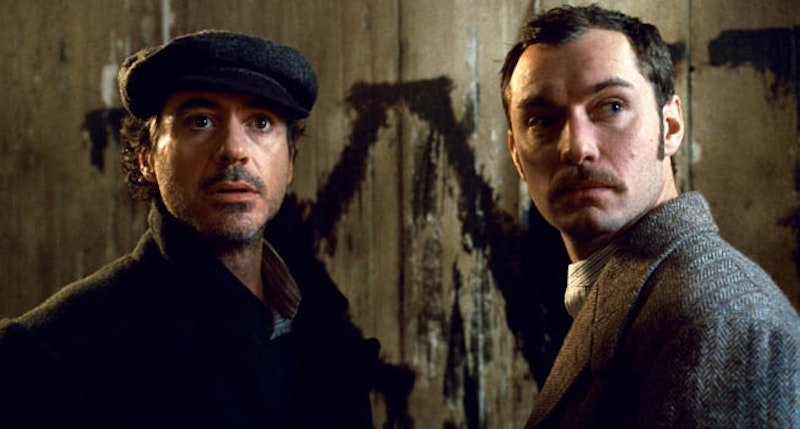 Unfortunately, in Sherlock Holmes Ritchie zips too quickly past his best and most chipper talk as if to get it over with and back to the action sequences—which are plentiful and very earnestly directed. I expected lots of action in this film, but it was mostly wearisome.

Hand-to-hand combat isn’t too interesting in period dress. It mostly darkens the movie and spoils the whimsy, which is really the whole point of filming Sherlock Holmes with Robert Downey Jr. and Jude Law.

Iron Man knew how to use Downey correctly. It kept it bright and light, giving him time to quip and be adorable and charming. Downey may not be in the same league of action stars as Matt Damon or Daniel Craig, but charm? Charm he has in spades. Jude Law has his charms, too, as does Rachel McAdams, though they mostly play straight men to Downey’s wunderkind (which is how it should be, I suppose). Law doesn’t really know what to do his Watson, a doctor who knows how to kick butt. He is both stuffy and prudish but also a badass—a tough combo, and Law doesn’t quite master it. McAdams does better, but she is a bit too adorable to be the bad girl in this film, even though we’ve seen her play the part well before.

This leaves Downey, who is sexy as ever and manages to make Holmes perfectly composed yet oafish enough to be a dependable badass, smart yet brutish. It’s a good performance, though he zips through his lines too quickly. His British accent is not quite crisp enough to deliver witticisms 100 percent effectively.

Sherlock Holmes pits magic (the bad guy) with reason (Holmes). Lord Blackwood, a kind of sorcerer, threatens all of London with high-profile and masterfully crafted murders, all of which are supposed to lead to some great climax. The problem is, even though we know who the bad guy is early on, we don’t know what he’s after, making the whole thing seem a bit random. Once we finally know for sure (it’s world domination; there, I said it), it’s anticlimactic and actually seems a bit silly. Blackwood seems campy in the end. That would be fine, but Sherlock Holmes, with its dark colors and deep shadows, takes itself a little too seriously for camp to be acceptable.

Sherlock Holmes is well engineered and entertaining enough to hold your interest. But I left the theater empty. I was unsure whether I was supposed to have had more fun or taken it more seriously. The film certainly looks more somber than it should, however playful the chatter and plentiful the fight scenes. I would’ve appreciated a brighter palette, less darkness and more color in Sherlock Holmes, something to take the edge off. It’s the Christmas season after all. Where’s the cheer?