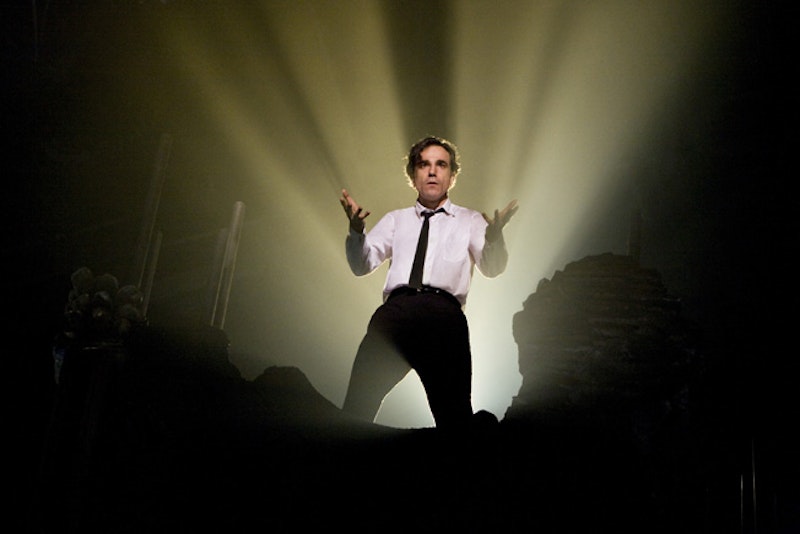 Courtesy of the Weinstein Company

I’d been anticipating Nine for months. And though perhaps my expectations were too high and couldn’t be met, I was underwhelmed.

Nine had a big job to do. It had to be fun and entertaining like the musical, and serious and emotionally deep like its source material, 8 ½, Federico Fellini’s masterpiece. Writing a musical based on one of the greatest films of all time is a pretty stupid idea, especially one as artful and sophisticated as 8 ½. Nine does an okay job, though, and it’s certainly entertaining holiday fare, gorgeous to watch and somewhat pleasing to hear. But as a story, it fails to reach its own expectations, let alone mine.
The film tells the story of a famed Italian director, Guido Contini, trying to make his ninth film, Italia, and simultaneously reaching into his past and present for inspiration. He has writer’s block, but his failure to write only symbolizes his existential angst.

In 8 ½ Fellini’s roving neorealist style—with its bits of surrealism and lunacy—is the perfect fit for a story about a director unknown to himself and looking for direction in life. The film searches for direction just as its protagonist does. Marcello Mastroianni, the classic blank slate, plays it straight. He’s tortured and introspective, but (eventually) aware of life’s ludicrousness and superficiality.

Nine has to convey all this complexity within the conventional Hollywood style, even worse, the Hollywood musical style, which itself is not well-suited for depth. Chicago worked because it didn’t take itself too seriously. It used social context—the 1920s, feminism, etc.—to deepen the story. The characters were mostly cartoons. It was fun. Nine has to be at least somewhat serious. It’s based on Fellini.

Nine, looking to reconcile these competing aims (entertain and deepen), just puts the two side by side: the ladies (mostly) have fun, while Guido (Daniel Day-Lewis) mopes, groans, whines and gripes. Day-Lewis goes hardcore method, las in There Will Be Blood, or Chekhov. He, as usual, conveys a sense of character. But it’s too much, too self-serious. Even Mastroianni played Guido with the slightest hint of whimsy. Day-Lewis’ Guido is wizened and tired, looking tortured in almost every shot.

The performance weighs down the entire film and prevents it from taking flight. With seven women characters, each with their own song (Marion Cotillard gets two) we don’t really get to know them, so Day-Lewis sets the tone for the film. Rob Marshall should’ve known he could not go as deep as 8 ½; he had to tell Day-Lewis to lighten up. The women, moreover, cannot sing (except Fergie); they cannot dazzle us. In the end, nothing edifies or excites, and the serious stuff feels forced. With no perspective, the movie lies fallow.

In sum, Nine plays it straight. The last scene lays the case. (Spoiler alert, but it’s not a big deal anyway). In 8 ½ we end with Guido surrounded by all the people in his life. They dance around him as if life is one big party at a carnival, incomprehensible, inconsistent, maddeningly unintelligible, but quite a ride nonetheless. In Nine, all the characters from Guido’s life just stand behind him, unmoving. Some smile, some don’t. Guido sits in his director’s chair, within his adolescent doppelganger sitting on his lap. The whole movie, Nine tells us, proves how Guido is a child (Judi Dench says it in the prior scene). He needed to embrace his immaturity.

Okay, then why doesn’t he smile?! If Rob Marshall wants to take the giddily ambiguous and vibrant 8 ½ and make it direct and unambiguous at least have the decency to not take yourself too seriously. It’s a musical! Musicals and European avant-garde cinema will never have a happy marriage, so, when push comes to shove, if you’re a musical, be a musical.

Nine should have been a meditation on how ridiculous it is to make sense of an entire lifetime, indeed, an entire nation (Guido’s movie: Italia).  Instead I got 110 minutes of Guido pouting and women dancing around him trying to make him feel better.

There were standout performances. Fergie, the only one can actually sing, gave me goosebumps—and should’ve been placed earlier in the film. Marion Cotillard is brilliant as the neglected wife, her eyes glisten brightly whether happy or distraught. Kate Hudson’s song—so far disliked by critics—was among my favorites. It hit all the right notes a) allowing us to dislike Kate Hudson for her American ostentation, b) entertaining us, c) teaching us more about Guido (his films are chic, sleek and modern, even as he is religious and sober) and d) adding some camp to an otherwise overly earnest affair.

Elsewhere, actors are underutilized. Penelope Cruz plays, for the 15th time, the saucy kitten temptress without the slightest hint of irony (unlike in Woody Allen’s Vicky Cristina Barcelona). Dame Dench is barely given enough opportunities to be bitchy and censorious. Sophia Loren is mother Italia, completely one-dimensional. Nicole Kidman is fine, just fine.

Expectations can ruin a film. My bar started quite high, but fell a few days ago when I saw the initial reviews. I still held out hope, though, that Daniel Day-Lewis, Rob Marshall, Marion Cotillard and company could never add up to a bad film.

I was wrong. It didn’t add up to a bad film. It added up to a visually stunning but generally lifeless one, which is much, much worse.