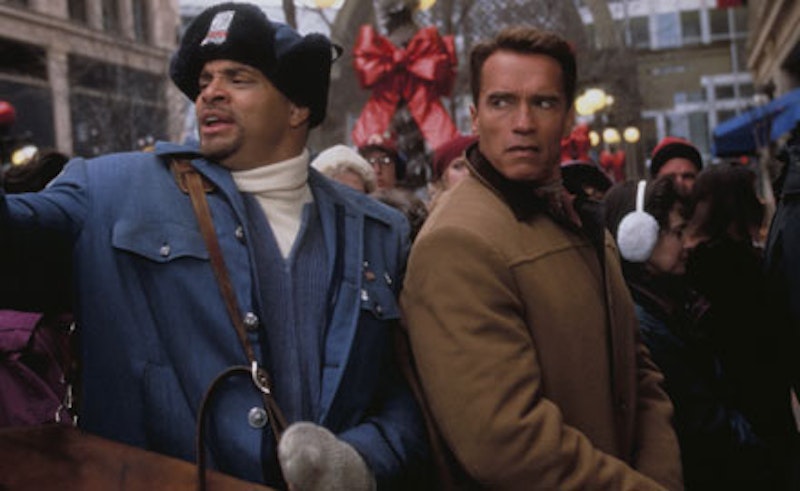 On Christmas Eve I spent the night revisiting a childhood holiday favorite: 1996's Jingle All the Way, starring Arnold Schwarzenegger and the kid who played Anakin in Episode I. I hadn't seen it in recent years, but it was once a tradition, and I wouldn't let a Christmas season pass without watching it at least three or four times. I loved this movie, mostly because it was the only one that reflected my Christmas experience.

It's completely of its time: Arnold plays a bumbling dad who neglects to get his son a Turbo Man action figure (a nod to the Power Rangers) until Christmas Eve. Of course the toy is sold out everywhere, and he must traverse Minnesota to find one, crossing paths with a crazed mailman looking to get a Turbo Man himself (played by 90s relic Sinbad), a mall Santa black market and a policeman who can hold a grudge. The movie certainly deserves to be made fun of—everything about it is poorly done—but the other night I was attracted to it, mostly because of how much it reminded me of my early childhood, growing up in the 90s.

My first Christmases were all about Power Rangers. Like every kid my age, I was obsessed with the show and all its merchandise. I made it clear to my parents that without a White Tigerzord for Christmas, I might not survive the winter. Those days and weeks before the 25th were brutal, filled with burning, white-hot anticipation for the day when I would finally take the haul and revel in the glory. Watching Jingle All the Way brought me right back to that world, when I all I cared about was getting The Toy, and nothing else was as important or exciting.

2010 is almost here and it seems amazing that 2000 was 10 years ago; I remember staying up until midnight with my mom on New Year’s Eve 2000, eating tortilla chips, watching the ball drop on TV, completely unaware of Y2K or any of the anxieties it caused. I was a passive observer of 90s culture: everything was mostly out of my control and understanding. Now that the Aughts are almost over, I feel a melancholy that the first full decade of my life is coming to a close. In the past 10 years I matured and became more and more autonomous, and next October I will (finally) turn 18. I feel a strong connection to these last 10 years because I was an active participant in them; I can't say the same about the 90s. I find it hard to believe that I was alive when Crystal Pepsi was available for purchase.

Revisiting Jingle All the Way in my room on Christmas Eve, I felt a modicum of that blind, uncontainable childhood glee that colors my memories of the 90s. I watched a snapshot of a time and a culture that I'm a product of but not a part of, a part of me that's faded with time. I reveled in the ugly haircuts, the fashion eyesores, the drab architecture and interior decoration, an overall atmosphere and feeling of the color gray. These vague sensations and images are what I associate most strongly with the 90s, and I saw them come to life in Jingle All the Way, for the first time in several years. When I woke up, I felt like I was six again, getting ready to play with my White Tigerzord under the Christmas tree, psyched for everyone and everything around me.