Still Not Sick of Hamilton

Most of what’s great about Hamilton on stage successfully makes the transition to television. A- 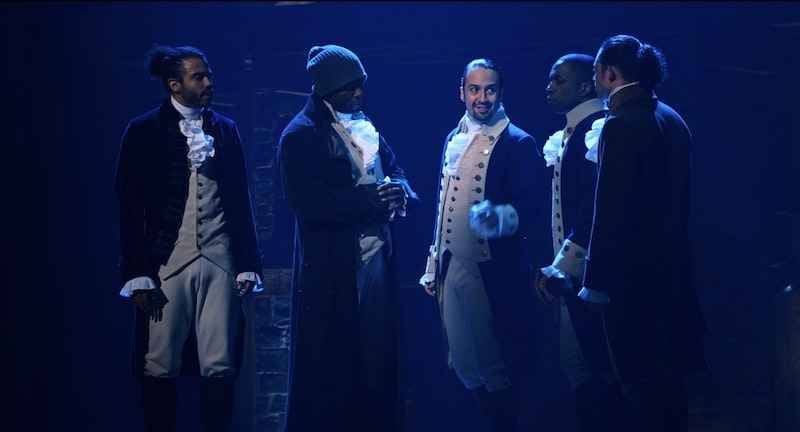 The arrival of the filmed stage version of Lin-Manuel Miranda's Hamilton on Disney+ this Friday brings up a dichotomy about the popular, award-winning musical that's fascinating.

Ever since Hamilton broke through as a cultural phenomenon in 2015, it's often been said that Hamilton is an elite liberal phenomenon, one acceptable solely to those who can afford to drop $1000 or more per ticket to see it on Broadway. This perception was strengthened during the 2016 election, when the Podesta leaks from Wikileaks were full of examples of DNC and Clinton higher-ups seemingly devoting more effort to scoring Hamilton tickets than to helping their candidate win the election.

This assumption was oversimplified. Much of the Hamilton fan base got into the show not from actually seeing it on Broadway, but from doing what musical theater fans have been doing for decades: Listening, repeatedly, to the soundtrack. The show has also toured worldwide for the last three years, and not always at exorbitant price points.

I'm a fan of the show, which came almost entirely from listening to the soundtrack, and I didn't see it on stage until it hit my hometown last fall. And Hamilton fandom isn’t an exclusively liberal phenomenon. I know plenty of conservative Hamilton fans, Mike Pence famously went to see it, and John Bolton named his recent book The Room Where It Happened.

I expect the arrival of Hamilton on Disney+ to blow through any notions of elitism. Directed by original stage director Thomas Kail, the Hamilton movie is a filmed stage performance, shot in June of 2016, featuring the original Broadway cast. After Disney, earlier this year, won a bidding war for the rights to the film, it received an announced release date for the fall of 2021. But the pandemic—which shut down all live theater—pushed the release date forward by 15 months, and moved it straight to Disney+.

It's not the same as seeing the show live at the Richard Rodgers Theater. But the Hamilton movie is an expertly-mounted production that conveys the essence of what Hamilton is all about. If you were wondering if Hamilton would play as well at home as it does on stage, the answer is yes. And if you’re among the many seeing the show performed for the first time, you won’t be disappointed.

The story is fairly well-known: Hamilton, which takes inspiration from musical genres ranging from hip-hop to R&B to more traditional Broadway canon, is a musical treatment of the life of founding father Alexander Hamilton, with the twist that the majority of the historical figures are played by performers of color. The show begins with Hamilton's arrival as an immigrant from a Caribbean island, through his service in the Revolutionary War alongside George Washington, his work as the first Secretary of the Treasury, and his death at the hands of longtime rival Aaron Burr.

Lin-Manuel Miranda wrote the book, music and lyrics, while also playing the title role, and assembling a first-rate cast that included Leslie Odom, Jr. as Burr, Daveed Diggs in the dual role of Marquis de Lafayette and Thomas Jefferson, Philippa Soo as Elizabeth Schuyler Hamilton, Renee Elise Goldsberry as Angelica Schuyler, and Christopher Jackson as Washington. Many of those performers, in the years since, have gone on to prominent roles in film and television, as well as on Broadway.

Most of what’s great about Hamilton on stage—the wordplay and rhyming couplets, the multiple satisfying emotional climaxes, and the multi-faceted relationships between characters—successfully make the transition to the television. The real standout is Daveed Diggs, who's got the best stage presence of anyone in the cast and nails two different tricky roles.

The show has more than a dozen great musical numbers, and I'd say the best-assembled one in the movie version is the back-to-back run of "Helpless" and "Satisfied." The production keeps it simple, making fine use of the sparse stage and minimal props, while using some tricks with lighting to make the visuals pop.

Hamilton is long, clocking in at more than two and a half hours. Since Hamilton opened on Broadway five years ago, it's sold about 2.6 million tickets. Considering Disney+'s 50 million subscribers as of last quarter, there’s a decent chance that by the end of the July 4th weekend, more people will have watched Hamilton on their television than have ever seen it on the Broadway stage. By the end of July, presumably, more people will have likely streamed Hamilton than have seen it on stage anywhere.