Epstein’s ex, like the Marquis de Sade, could spark a Bastille Day. 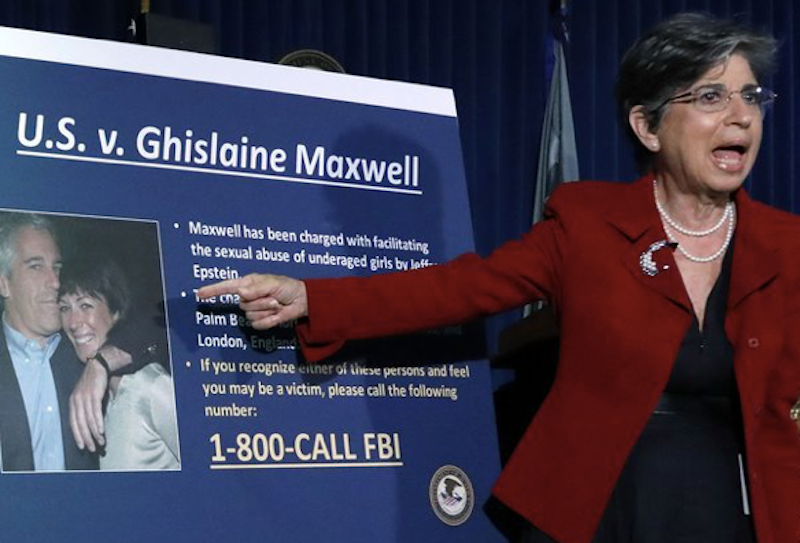 If alleged molester and sex trafficker Ghislaine Maxwell “commits suicide” in jail before getting to trial, I predict establishment publications such as The New York Times—who’d pride themselves on spotting corruption if it were taking place in Saudi Arabia or Latin America—will print pained pieces about how Maxwell’s ex-boyfriend and father are both believed to have died by suicide, so she too must’ve been in an emotional “high risk group.”

They will thoughtfully include phone numbers and URLs for assistance services in case their readers are likewise plagued by morbid thoughts in these troubled times. Nothing significant will be learned.

By contrast, if people fear the system will kill Maxwell before she can testify about other elite criminals, and that leads people to rebel against that whole system, she might end up serving a useful purpose, not unlike the comparably despicable Marquis de Sade 231 years ago.

An early turning point in France’s 1789 revolution against corrupt aristocrats and royals was the storming of the Bastille on July 14, and it followed just days after de Sade stirred up the mob outside that prison by shouting down to tell them prisoners were being murdered inside. De Sade was evil himself, imprisoning and sexually torturing people, including children—not just in his fiction but in real life—but he may also have helped draw attention to the crimes of the regime that imprisoned him.

Around the time of that first Bastille Day, de Sade was transferred from prison to insane asylum, then worked with the Revolutionary government, then was re-imprisoned a few years later by Napoleon for the pornographic works that give sadism its name. If Ghislaine Maxwell lives and tells all about crimes committed not just by her and her ex-boyfriend, the late Jeffrey Epstein, but by child-molesting members of our modern aristocracy—one that now spans intermingled corporate, governmental, academic, and religious realms—she might at least be seen by history as leaving a complex mixed legacy of much evil and some good, like de Sade himself. It’s apt, then, that Maxwell and Epstein had each (apparently) flown in from France before their most recent arrests.

America’s current political tumult, like many revolutions, has no clearly defined end goal, which is frightening but also suggests some slight potential for improvements to occur.

Most libertarians and even some conservatives would be happy to see the current unrest end with thoughtful reminders the Confederacy was, after all, an evil government, explicitly fighting to protect the coercive system that was slavery. And since all that was a century and a half ago, we’d be even more pleased to see the current unrest lead to drastic reforms of present-day policing, such as letting cops be more easily sued or arrested for wrongdoing on the job, but also decreasing the need for policing by eliminating most laws, such as the ones dictating which drugs you can put into your body when.

None of that means, though, that we’re obliged to salute an uprising out to topple every statue depicting someone non-“woke” by 2020 standards, which is to say virtually everyone who lived prior to this century, not to mention an uprising out to burn down stores, menace innocent motorists, or block access to Mt. Rushmore without regard to the rule of law. Law requires consistency, and society can’t endure if people are allowed to set things on fire because their relatives, or merely their friends’ relatives, were slaves 150 years ago, nor if people are allowed to get away with sex crimes merely because they know royals and presidents.

Keep letting the lower-class-allied mob and the power-wielding elite off the hook, and you’ll end up with some middle-class-allied (yet woefully non-libertarian) instrument of political vengeance like pundit Tucker Carlson running for president to restore order (not that he appreciates the commercial and individualist underpinnings of a truly stable social order).

Without being a conspiracy theorist or even a run-of-the-mill populist, though, anyone sincerely hoping to keep Maxwell alive in federal prison longer than Epstein lasted there (in the same Manhattan jail) is intellectually obligated by history and recent events to plan for the possibility, however slim, that forces wanting Maxwell dead might include elements within U.S., UK, Saudi, or Israeli intelligence as well as vengeful pedophile-victims and vengeful pedophiles in the prison population—not to mention Clinton associates, British royals, and paramilitary-like elements within the prison guard population extra-loyal to William Barr (who visited the Epstein/Maxwell prison shortly before Epstein’s death). This last faction is one that might not have been on the radar of even the most paranoid conspiracy theorist (at least not the right-wing ones) had such guards not been on display engaged in recent high-profile protest suppression actions in DC.

Does anyone believe the S.H.I.E.L.D.-like, Angel Has Fallen-level security measures necessary to guard against those hypothetical threats are being taken? If not James Bond-level security, are there at least Black List-level safeguards in place this time? Or at this late date are we just going to follow standard procedure and see what happens—because to do otherwise might look too, you know, uptight and crazy?

Remember, if Maxwell lives and really spills the beans, we might get to look forward to entertaining spectacles such as Bill Clinton defending his involvement with the Epstein crowd by saying he wasn’t abusing underage prostitutes, merely having an affair with the madam, Maxwell.

As for me, I’m relieved to learn that the “Shelley Lewis” appearing frequently in Epstein’s flight log books doesn’t appear to be the one I knew years ago but rather Shelley Anne Lewis, founder of Sacred Space NY. I can’t help noticing the parallels with the recent arrest of Brazilian New Age guru and serial rapist John of God: The people who like massage, feel-good messages, and Oprah/Clinton-style shallow spiritualism are sometimes the easiest marks for smooth con artists. This pattern is what many people refer to when they condemn the broader lackadaisical, feel-good culture of “liberalism” as it has existed in the U.S. for the past few decades—not centuries of Montesquieu essays, constitutionalism, or what have you, the parts of liberalism that remain valuable.

Then again, when a judge orders the lawyers of chief Epstein witness Virginia Giuffre to destroy lists in their possession of Epstein’s associates, and issues that order on the very same day Maxwell was arrested, you have to suspect that “rule of law” isn’t all it’s cracked up to be. It can be manipulated to protect the rulers. Destroying those files might also upset lawyer Alan Dershowitz, who wants those records released because he claims they will show he, at least, was innocent of the activities in which other Epstein associates engaged. He also adds, whether nobly or strategically, that we should be as cautious about declaring Maxwell guilty as we are any other accused defendant.

At some point, as in 1789, if people—not just on the left but across the political spectrum—become convinced that formal institutions of justice can’t get the job done in tough situations, whether stymied by the mob or an aristocratic cabal, they might resort to more anarchic solutions. They won’t necessarily be wrong. Maybe history will even look back on the short, delusional period of liberalism, lasting just a few centuries, and think people were as naïve to trust courts, jails, and laws during that period as they were to trust churches, knights, and tribal councils for centuries before that.