Sky Kings and Their Queens 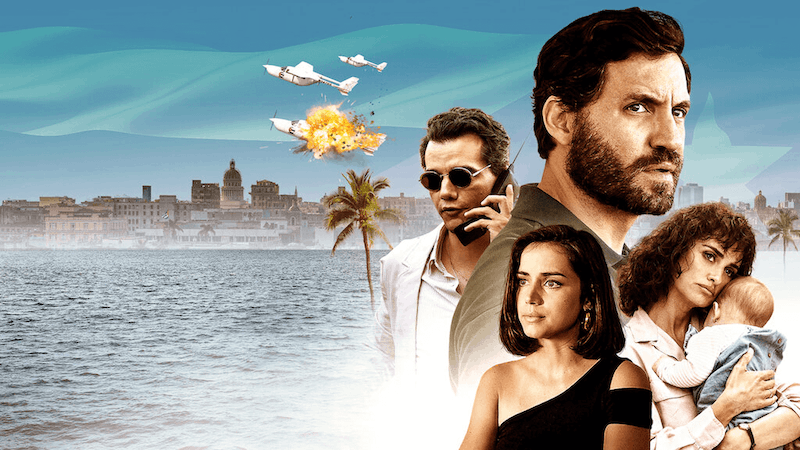 I recently visited Zihuatanejo, the Mexican town where Tim Robbins and Morgan Freeman moved after escaping from Shawshank Federal Penitentiary. Robbins and Freeman were still there, sanding boats and recording wistful voiceovers. With them were a number of former Cuban defectors, turned former Cuban spies, turned former American prisoners. “Zihuatanejo is our home now,” one of them said to me. “It’s the only place where we won’t be recruited, arrested, or forced to star in a movie adapted from a book.”

I’m joking, but anyone watching Olivier Assayas’ pointless new historical epic Wasp Network ends up wishing there was a place that ex-Cubans could go when they are finally able to get off the merry-go-round of Caribbean espionage. The people in Assayas’ movie are so much in demand, and then subject to so much recrimination, that it’s easy to feel glad (as the viewer) that you’re living the simple life of... being anyone else. In that sense this is an effective movie, but not in any other.

For a film packed with stars, Assayas’ movie has surprisingly little to offer them. Gael Garcia Bernal is wasted as a spymaster whose background remains mysterious to us, and who sits around drinking appletinis and congratulating himself until he’s arrested by the USA and sentenced to two consecutive life sentences. Penelope Cruz is also wasted as a mother who does menial jobs in Cuba, and then starts an exciting new life doing menial jobs in Miami. She’s so stoic and long-suffering that when her baby starts slapping her in the face, I assumed it was an effort to get her to show more emotions. In fact, the script gives her too many conflicting emotions. In one scene she’s in Cuba, resentful of her husband’s decisions and trying to manage family life on her own. Ten minutes later she’s reunited with him in Miami and getting pregnant. Twenty minutes after that, he’s been arrested, and she’s supporting his omerta vow on behalf of Cuba, a country that has seemingly treated both of them like disposable billiard balls.

The film has been a minor sensation in the United States, reaching #8 on the Netflix “charts,’ and I have to imagine that the reasons have something to do with the pleasant, sun-dappled sensation of watching people living la vida pilota in Cuba and the United States. They dance, enjoy live Cuban music, and smoke impressive cigars. But they do this as empty suits. At one point in the doomed marriage between Juan Pablo Roque and Ana Margarita Martinez, Roque says, “I’m wearing a $2000 suit. Does that bother you?” She doesn’t answer, but it seemed to this reviewer that the suit was wearing him. These are people playing roles, and as much mild fun as it might be to watch them do that, they’re largely ciphers as human beings. That’s a huge disappointment from a director who usually specializes—in films like The Clouds of Sils Maria and Summer Hours—in the kind of incisive character studies that bring out deep emotions in his talented casts.

The basic challenge in any spy movie is getting the balance right between the humanity in all of us and the inhumanity that being a spy requires. Roque is something of a smiling villain in Wasp Network because he marries his wife and then deserts her in Miami. But this doesn’t add up to much when you consider that all of the other characters are doing the same thing. Is it better, for some reason, to leave your wife gasping in your wake if she’s in Cuba? Is that why the film ends up mocking Roque for selling his Rolex on eBay? The script is flat; everybody says exactly what you’d expect them to, and the translations from the Spanish make their sentiments even more banal and chewed-over. One longs for the kind of writing that distinguishes Shakespeare’s historical fictions, where every character is as eloquent as Macbeth or as inventive as Falstaff. Not everyone can write like Shakespeare, but a great spy movie (or even a mediocre spy series like Alias) can invest characters with a certain archetypal depth of field: the company man, the sinister back-room dealer, the moralist caught in the crossfire. Here we don’t get real characters at all, and have to put up with watching mere functionaries, many of whom don’t even bother to stay onscreen for every part of the drama. Bernal, for instance, only appears halfway through, despite getting top billing.

Assayas seems to care about the way the people in his story were exploited, and there’s no question that they were exploited, on paper. But by bringing that exploitation to life in such gleaming tropical settings, and putting scenery above sentiment, he gradually sucks all the air out of the story of their lives. There’s more power in a single scene where a bomber is left to suffer in Cuba by his American backers—a bomber, moreover, that we’ve never seen before—than there is in the sudden announcement that Olga Salanueva (Cruz) is pregnant again. Even Assayas’ cutesy reliance on fading to black starts to seem like the hurried work of somebody with too much story to tell who has made too little sense of it all before rushing headlong into production.

This film reminded me of the terrible experience I had watching Welcome to Sarajevo, that Michael Winterbottom film that got good reviews simply for portraying the former Yugoslavia as, if you’ll pardon the expression, a total clusterfuck. That’s what came of the rich expats in Miami trying to terrorize Castro’s successful, authoritarian regime: a lot of chaos and a lot of suffering. Perhaps that’s why Assayas felt justified in transferring this labyrinth-going-nowhere onto celluloid. Perhaps he believes that we, as the viewers, have a responsibility to honor the ordinary people who were locked up or killed because of the games Cuba and the United States once played. But he forgot something about ordinary people. Great films make them seem extraordinary. Wasp Network falls far short of that mark.