Irresistible is testament to how blinkered and clueless artists can become in exile. F 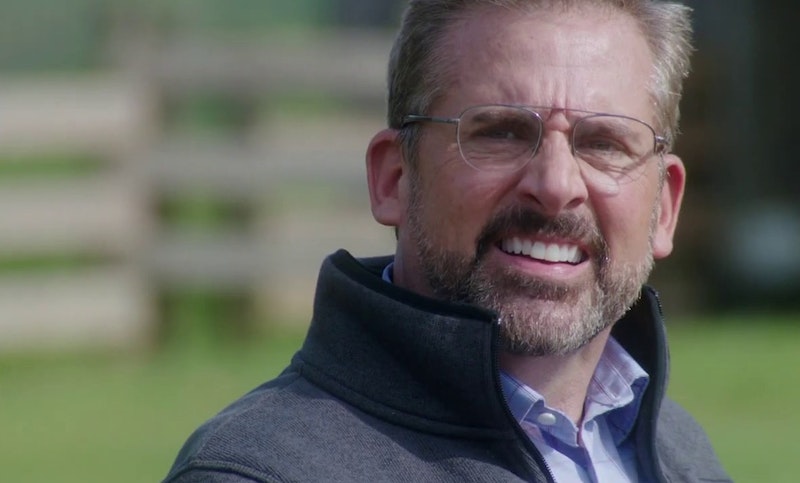 In an interview with Joe Rogan last week, Jon Stewart said that when he got busy with The Daily Show in the early-2000s, his standup career was effectively over. “I would think, ‘I’ll go into the city, hit the [Comedy] Cellar… and then my wife is like The Bachelorette is on…” Being a righteously angry shut-in is the only explanation for the inexplicable Irresistible, a sad example of how many artists end up making parodies of their “greatest” work. In retrospect, Stewart’s years on Comedy Central (1999-2015) weren’t as fruitful or productive as they felt at the time. Calling Tucker Carlson a “dick” on CNN in 2004 hasn’t stopped him from becoming the heir apparent to Bill O’Reilly and Rush Limbaugh. Meanwhile, Stewart is stuck making comedies with his movie star buddy Steve Carell—political satire, mind you. Are you offended?

Stewart never had much in common with Ricky Gervais or any of the other one-note “new atheist” comedians that stalked the same ground as The Daily Show in the middle of the Bush administration: mocking and provoking evangelical and fundamentalist Christians. Gervais and Bill Maher mocked their beliefs; Stewart (and Stephen Colbert) mocked them for what their beliefs made them do, whether it was homophobia or blind support for the Iraq War.

Irresistible is Stewart’s second movie, and his first return to political satire since leaving The Daily Show five years ago. Carell plays a DNC operative with a team of squirrelly nerds (including Topher Grace), Rose Byrne plays an RNC operative that does a better job than everyone else, and Chris Cooper plays a “Joe the Plumber” type that catches attention for 10 seconds in a media environment that doesn’t exist anymore. Carell thinks Cooper is the DNC’s ticket back to power: rural, white, “progressive.” When the first trailers for this movie came out, it was an instant joke, showing an artist in exile returning even dumber than the fans he left behind.

Nothing about this movie is funny. Even the title, Irresistible, is wrong. Who’s “irresistible”? Not the Cooper character, who “inspires” a town along with a nation with his “impassioned” speech at a town hall with the mayor. Is it Byrne, the Kellyanne Conway/Kayleigh McEnnany spin stand-in that lies for a living on conservative networks? Maybe, but she’s not in the movie much. Carell? Please. What’s “irresistible”? The word doesn’t even come up in the hare-brained DNC at their most impaired style of campaigning Carell’s character pushes on Cooper. “You’re a Democrat, you just don’t know it yet.”

The one active ingredient in Irresistible is its mild twist ending, where we find out Cooper’s daughter (Mackenzie Davis, who may be “irresistible” to Carell’s character, in the service of one stupid joke at the end of the movie) staged the entire “viral video” so that the DNC and RNC would send operatives to Deerlacken and flood the place with money and make sure that their school wouldn’t shut down. The one thing this movie gets right is “the average American”’s contempt of the media and, more importantly, that they have the upper hand. For the first time in history, the layperson knows how to manipulate the media.

Irresistible should make every artist afraid. This can’t be called a fall from grace because Jon Stewart has been wisely with his family since leaving The Daily Show in 2015. There was another movie in 2014, Rosewater, I only remember for Stewart’s interview on The Howard Stern Show. He railed against predictable villains and advocated for familiar causes, and largely repeated that material in his interview with Joe Rogan last week: reparations and compensation for 9/11 victims and first responders, and all veterans and victims of the wars in Iraq and Afghanistan. Stewart has maintained personal relationships with veterans, firefighters, and cops (heavens to Betsy!)—all on the low, to his credit. He’s been more productive in his “retirement” than Barack Obama.

So why bother making Irresistible? Stewart doesn’t need to say anything in a movie or a standup special; he’s proven perfectly capable in Congress and his checkbook. Irresistible is “an unforced error” in a career no one was keeping track of anymore. It reminds me of Bob Dylan’s new album cover, or anything by Neil Young in the last decade. Artists become sad imitations of themselves, appearing to misunderstand everything they once stood for. It doesn’t mean much, but what the fuck is Jon Stewart thinking?

There’s nothing offensive or risible about Irresistible, and that’s unacceptable. It’s a nothing movie, which is worse than actually saying nothing. Stewart doesn’t realize that the movie he is making is the movie the character he’s making fun of would make. Irresistible is as blinkered, dysfunctional, and financially wasteful as the campaign operatives it depicts. No amount of money can justify the existence of this film when there are 9/11 first responders still without healthcare. Run along now, Jon Stewart. Do good in private.