Get on the Bus (1996) is a severely underrated and overlooked film in Lee's body of work. 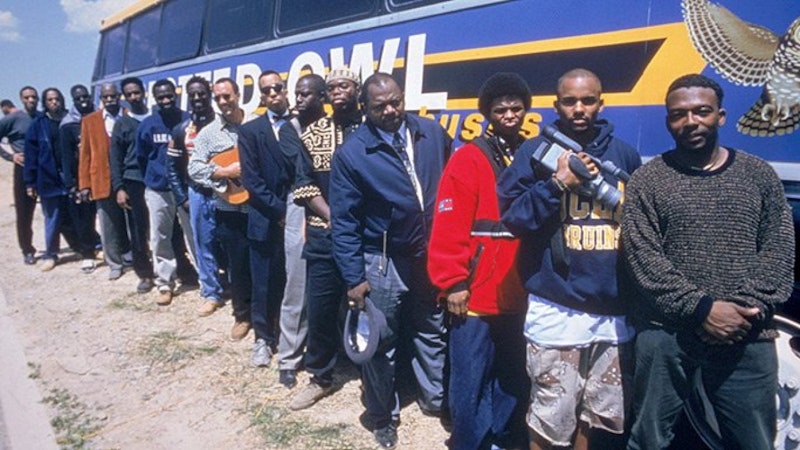 Almost everybody has seen Do the Right Thing: a masterpiece, and one of the most important films of all time. Spike Lee's filmography is stacked with essentials: Jungle Fever, Mo' Better Blues, Malcolm X, Crooklyn, Da 5 Bloods, and She's Gotta Have It among them. The list goes on and on. Lee is one of the most celebrated filmmakers living and working today, but so many of his films are often overlooked.

Get on the Bus (1996) is easily one of Lee's most ambitious works: filmed on 16mm, the movie’s experimental aesthetic may have contributed to its commercial failure, but the content of the work itself is no less substantial than any of his hits or cult favorites like Bamboozled. Written by Reggie Rock Bythewood, Get on the Bus feels like a play because most of it takes place on a bus with only a dozen players, mostly talking (and arguing) amongst themselves for two hours.

12 Black men embark on a cross-country trip from Los Angeles to the Million Man March in Washington, DC. Lee often exaggerates archetypes and stereotypes to emphasize their artificiality and how they harm us. Every character on Get on the Bus is different from each other. As the film progresses and the characters reveal themselves, it becomes apparent that although their intended destination is the same, their beliefs and outlooks on humanity diverge drastically.

Lee addresses homophobia by including a gay couple (played by Isaiah Washington and Harry Lennix). Another passenger is surprised and antagonizes them for being gay. Gabriel Casseus plays a converted and practicing Muslim in the Nation of Islam, later revealing that he is an ex-gang member, seeking redemption for his past life. Roger Guenveur Smith plays a biracial cop who was raised by his white mother due to his father being killed in the line of duty. A father and son are also thrown into mix. However, they are handcuffed due to a court order. The bleak irony of a father and son attending the Million Man March in chains is bookended by images of chains in the beginning and ending credits. Ossie Davis plays the wise, old philosopher who preaches peace and togetherness. Even Bernie Mac shows up, playing the owner of a bubble gum company.

The only white person on the bus is the Jewish driver (Richard Belzer), who gives Lee an opportunity to address anti-semitism. The bus driver accuses Nation of Islam leader Louis Farrakhan of being anti-semitic, to the passengers dismay. When he gets close to DC he switches drivers, claiming, “I wouldn't expect you to drive a bus to a klan meeting.”

In Lee's films, the moral lesson can be ambiguous, if there is one at all. The brilliance of Spike Lee is his ability to tell it like it is, let the viewer decide for themselves, and stand in defiance of his relentless critics. He shows that people are flawed. He confronts stereotypes that other filmmakers wouldn't dare touch and throws them in the forefront. Lee shows us these different stereotypes to show the audience how childish and backwards it is to group people into categories. But Spike Lee doesn't want us to agree with each other. He wants us to understand and perhaps even empathize with each other.

Although this is the first film directed by Lee that he himself did not act in, Get on the Bus could be his most personal film, despite the fact that he didn’t write it, either. A short and eccentric character played by Hill Harper named Xavier, who goes by “X,” is an embodiment of a young and curious Spike himself. A UCLA film student, X is filming a documentary about the his trip to the Million Man March. This element allows X's camera to serve as a non-biased observer of the trip, documenting the important voyage. (Another character even jokes that “Spike Lee, Jr.” is taking his camera too seriously).

Although Spike Lee's filmography contains a few duds (Chi-raq), it doesn't detract from his artistic vision—no, it improves it. Lee isn't afraid to try new things. He doesn't care to make the same film twice. Get on the Bus is no exception, and it’s become of my favorite Lee films. Ever prolific, Lee poignantly premiered Get on the Bus on October 16, 1996 – exactly one year after the Million Man March.