I Spit On This Movie 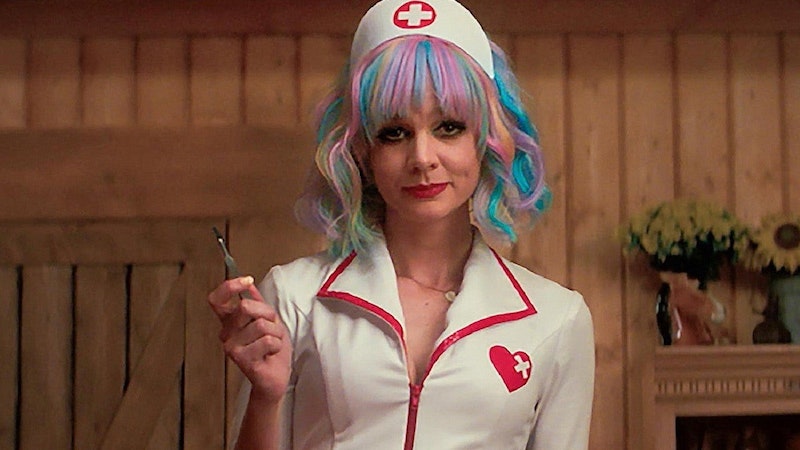 Promising Young Woman, a film written and directed by Emerald Fennell, would’ve had a theatrical release last year around April. Maybe that would’ve put the nail in the coffin of #MeToo movies, but no—this one will go to streaming and live largely unnoticed.

Being able to watch first-run movies like Promising Young Woman at home, alone, made its absurd conceit, paper-thin characterization, and incoherent social commentary all the more glaring. Carey Mulligan plays “Nina,” a survivor of sexual assault who, at 30, lives with her parents, and apparently does little else besides lure predatory men at clubs and from her past by pretending to be blackout drunk, only to snap out of it once they’ve gotten her into a cab and dragged into her bed. But she doesn’t kill them: she mostly just scares them, and gives them lectures. I Spit On Your Grave, this is not.

But this woman is not a survivor, as far as we know—and her name isn’t “Nina,” it’s Cassandra, or “Cassie,” and Nina Fisher was her college friend, and she was the victim of a public gang rape when they were in school. The real Nina is dead, presumably by suicide, but this is never dealt with. After this reveal, Cassie continues her sociopathic quest, stopping short of seriously hurting or killing anyone, but still clearly on a suicidal, or, generously, completely nihilistic mission—and this is considered a pro-forma thriller reveal rather than the gaping hole it leaves in the narrative and the terrifying implications it puts upon the protagonist of the film.

Cassie isn’t a hero. She isn’t virtuous, or noble, and she accomplishes nothing by showing other people “what it’s like.” These people include the dean who didn’t believe Nina: Cassie abducts her daughter and tells the dean she’s left her with “a bunch of frat boys,” adding that, “they didn’t think she looked so young.” Instead of immediately calling the police, the dean (Connie Britton) just stares at her, mouth agape, ready to take in all the shame and anger coming her way. Cassie tells her (and us) that her daughter is actually just at a nearby diner, and gets up without saying much else. She leaves without being accosted by campus security—the dean “learned her lesson” and was put in her place, temporarily robbed of her dignity.

Okay. So what? Why didn’t Cassie just cut her throat? Promising Young Woman is a slasher if you considered being cancelled a fate worse than death.

The only clever aspect of Fennell’s film is the casting: a succession of recognizable white male actors in their mid-30s come into “Nina”’s orbit, starting with The O.C.’s Adam Brody at the very beginning in a sticky strip club. Cassie plays close to blackout drunk, flashing her crotch and drooling on her business suit. Brody acts like “the nice guy” among his friends, who immediately start salivating—“That’s asking for it”—so he goes over to Mulligan and asks if she needs any help. When she can barely talk, he offers to give her a ride home.

In the cab, he suddenly decides to get out at his place. He takes her upstairs and quickly tries to kiss her. Mulligan reveals she isn’t drunk, freaks Brody out, and then presumably kills him as the credits roll over Cassie walking home the next morning covered in blood and barbecue sauce. Fine tease, but can’t we get at least one good death scene?

Rinse and repeat. Promising Young Woman is not a rape revenge or exploitation movie, but an after-school special with a very expensive cast and crew. It’s so didactic, even the deaf will be able to pick up on what this movie is trying to say.

Cassie ends up with a pyrrhic victory: killed in self-defense by the man who raped her friend, she gets one last kick from beyond the grave when scheduled text messages and packages show up to all the right people, like Burnham, along with all the other men who took part in and filmed the rape of Nina Fisher, are arrested under maximally embarrassing circumstances (the rapist’s wedding). But why did Cassie do this? We never find out how Nina died: suicide is just a guess, but that’s just one of a number of problems with Fennell’s rickety script.

Promising Young Woman takes place in a non-specific American town, and instead of creating something universal, Fennell has created a generic world with little connection to American reality. Fennell is an English filmmaker, but unlike Andrea Arnold’s American Honey, her movie isn’t a miraculous kaleidoscope of late-2010s coast-to-coast American experience. It isn’t even convincing as an American “movieland,” the kind of space where Martin McDonagh’s Three Billboards Outside Ebbing, Missouri operated.

There is a romantic—bruised or otherwise—version of America that exists in “movieland,” but it looks like Fennell stopped at boilerplate. Anna Khachiyan and Dasha Nekrasova, on a recent episode of Red Scare, pointed out a number of generic names and placeholders, like the social media platform “Friender” and the name of the school (“America College”) that make the film feel uncanny, like a pharmaceutical commercial. The men wear pink polos and plaid shirts that are too tight, and Cassie dresses like a superhero and walks like Uma Thurman in Kill Bill but just ends up dead in the lamest possible way.

If this is an explicit attempt to show “how things really end up,” it’s completely at odds with the film’s aesthetic, which is that of the Hollywood thriller or action movie. That we never see Cassie hurt anyone isn’t a point in the film’s favor but merely a sign of its fundamental dysfunction. How can we take Cassie’s horrified reaction to the gang rape video—which we never see—seriously if we’ve just seen her go on a “revenge spree” that more or less consists of scared-straight lectures? I want to root for this woman, but she has to cut somebody’s throat to keep my interest. Otherwise, she’s just a garden variety lunatic with a death wish going about it in a not-too-particularly-exciting or righteous way.

Fennell’s overzealousness in capitalizing on the #MeToo moment and making a proper “take that” movie makes her capitulate to liberal ideas of “classiness” and decorum—of course Cassie can’t hurt anyone, how could we feel for her otherwise? This real-world logic makes no sense in the context of an action movie. Again, because the actual dramatic content of the script is so weak, the style is left hanging, and we have Cassie walking down the street looking like Harley Quinn at the end. She sacrifices herself—unnecessarily, but then again, that was the only way to come out of this movie feeling anything about such a thinly-drawn psycho—and Nina Fisher is avenged, I guess. Two people are dead and half a dozen or so are in jail.

Fennell’s incoherent mix of contemporary assault discourse and a highly-stylized but failed “movieland” leaves Mulligan hanging, giving by far the worst performance of her career. She’s quite good otherwise, with enough range to pull something like this off if written and directed better. Caught between two poles—earnest social critique and garish entertainment—Promising Young Woman fails in all respects. But there’s one thing you can’t take away: this is a movie of its time, unsatisfying, needling, wanting and giving too little all at the same time.