The Three Masks (of Corona Authoritarians)

This will all look ugly in retrospect. 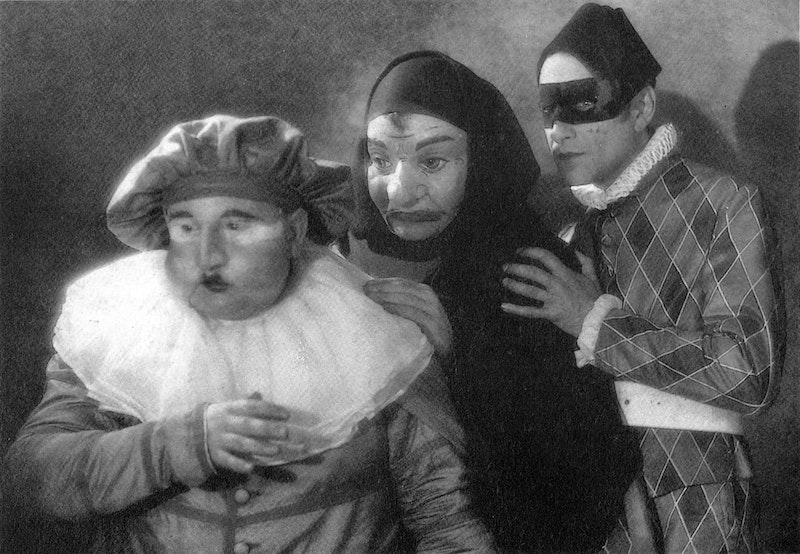 One of France’s first films with sound was 1929’s The Three Masks, about brothers seeking revenge among carnival folk for their impregnated-and-abandoned sister. Sometimes pop culture looks fast-changing and other times it looks as if we’re on season 92 of American Horror Story, the same ugly stories—and impulses—playing out over and over.

Humanity has been like this for far longer than a century. With some serious health commentators now lauding the idea of wearing two or even three masks for maximum resistance to COVID (at least one piece contemplates using four), we’re slowly but surely making our way back to wearing huge masks like those of the long-beaked “plague doctors” from the Middle Ages, with all the attendant paranoia, mob psychology, and junk science that characterized that era.

Even the most slavishly pro-establishment “Believe the science!” citizen and mob participant must by now have noticed that the official messaging about COVID whipsaws between reassurance and terror for reasons only partly determined by facts.

CNN wore the scariest possible COVID mask, complete with a constant COVID death toll ticker down in the corner of the screen, when that seemed the best way to embarrass Trump.

Mere days later, when Biden was inaugurated and it was time to make the masses feel good and associate the new administration with happier times, the happy mask went on, CNN’s death ticker went away (despite deaths continuing), California’s Gov. Newsom lifted his stay-at-home order on citizens of that state (despite deaths per day being something like 65 percent higher than they were when the order went into effect), and there were numerous stories about rapidly falling COVID rates across the land. Huzzah!

New York’s Gov. Cuomo started talking about the need to end lockdowns quickly for the sake of ailing businesses—ones he hadn’t seemed too worried about for the preceding several months—though at the moment, Cuomo’s version of a happy mask is merely telling restaurants they can operate at one-fourth their usual capacity, starting, by another astonishing and totally scientific miracle, on Valentine’s Day.

A few days after that rhetorical twist, amidst falling TV ratings and increasing resistance to lockdowns on multiple continents, a new scary mask (the third mask in a period of weeks, as it were) went on, ostensibly because of potentially deadlier, more easily spread, variant mutant (!) strains of COVID being detected—and possibly quickly developing resistance to vaccines to boot. Since to people whose only tool is a hammer every problem looks like a nail, you know damn well the panicked response will be calls for even more central planning and more vaccine shots on top of the multiple, ever so slightly effective yet side effects-causing ones into which the world’s already rushing (Pfizer at one point musing that six or more total shots per person might work best).

While dweebs, purported “fact-checkers,” and establishmentarians of all parties (and all parties look awful today) insist these twists and turns are all just the latest reactions to the cold, hard science, some anomalies that don’t fit the narrative go largely unreported—such as the pharmaceutical giant Merck deciding it’s staying out of the COVID vaccine business because the rate of symptoms would be lowered more easily by just letting large portions of the population catch the (usually symptomless) virus and recover, developing resistance and in some cases immunity.

In other words, lockdowns and vaccines aren’t complete nonsense, but they may well be a case of a “cure” that’s a bigger burden than (nearly all cases of) the disease, and it’s not “unscientific” to say so, as even (some) pharmaceutical companies, in their more objective and impartial moments, realize. Add society-wide economic calculations to the more narrow health considerations, and the current response regime starts to look rather hasty, with one study suggesting there will be more deaths from the long-term economic devastation of the lockdowns than from the disease itself. There’s nothing rational about dismissing such tradeoffs.

In the meantime, political biases leave us at the mercy of heavy-handed centralized solutions in every area of life, as if that’s what constitutes “erring on the safe side.” Even in purportedly freedom-loving Texas, the uptight rules of modern education now seep out of kids’ Zoom screens and right into their home lives, as if we hadn’t taken enough moves from the Nineteen Eighty-Four playbook already. One boarding school student, for instance, was ordered to take down the Gadsden (“Don’t tread on me”) flag visible in his room lest it upset his fellow classmates via videoconference.

But then, why should we be shocked if freedom-oriented proclamations are the thing deemed most upsetting to the un-free? The Soviets didn’t declare loudspeakers playing communist anthems the biggest threat to public order, and COVID-era American bureaucrats dispensing advice are unlikely to warn students to flee intrusive health officials or authoritarian teachers. Scientific or religious, corporate or governmental, bureaucracies feel safest when promoting bureaucracy, so that’s likely your immediate future, regardless of what new treatments or viruses come along.

We’re just creating a safe educational environment, the bureaucrats will insist, the way we’re just following the science with all those other decrees. Stop disrupting things!

Meanwhile, beyond the walls of schools and hospitals, the Trump-bashing U.S.’s ostensibly objective studies are about four times as likely to conclude hydroxychloroquine can’t help COVID patients as studies done in other countries, the mayor of ostensibly anarchy-friendly Portland pepper sprays a civilian who shouts at him for hypocritically neglecting to wear his COVID mask, Biden does his part to shape scientific terminology by banning government officials from referring to COVID as the “China virus,” and Singapore starts using COVID tracking info in (surprise, surprise) non-health criminal investigations as well. Who could’ve foreseen that fortuitous social benefit, fellow surveilled citizen? I wonder if any other governments will have that idea, or abuse the power if they do?

I spent about a decade working as a writer and editor for scientists and public health experts, and much as I liked my immediate colleagues, there was no mistaking the fact that the world of public health in which they swam was one very skewed toward authoritarian and top-down thinking. Kids getting fat? Pass a law, raise a tax, use the schools to stealthily implement the plan, lie to the parents about it. Flossing rates low? Put everyone in prison, etc. There just weren’t many people in health, I found, who worried about impacts on things other than health. That’s fine. That’s their bailiwick. Just don’t give them any political power, not even in a crisis, contrary to what every respectable liberal now tells you.

It’s tempting to note that even with U.S. COVID deaths purportedly running about 300,000 per year so far, that only makes COVID’s death toll about the size of, say, obesity’s. But what I also learned from my time adjacent public health experts is that if you say something like that, you’re less likely to create calm than to create a clamor to institute as many rules and regulations against fat as we have against COVID.

In the 1990s, a well-meaning free-market think tank sent out a press release joking that if the law cracks down on every addictive drug, maybe we should crack down on coffee. I thought at the time it was a risky rhetorical strategy given how authoritarian people’s intuitions are, and indeed within a few years, some of the same people who had received that press release were pressuring the FDA to study the safety of caffeine intake, a push echoed in more recent years in the calls to regulate energy beverages. (The drug war did not end.)

At some point, learn to stop handing bureaucrats more excuses to tighten the screws on everyone, no matter how benign the controllers’ masks appear.