Going Up or Going Down?

The Dig (B-) is a fine movie for archeology buffs, but few others; Apollo 11: Quarantine (B-) is a nice companion to one of 2019's best documentaries. 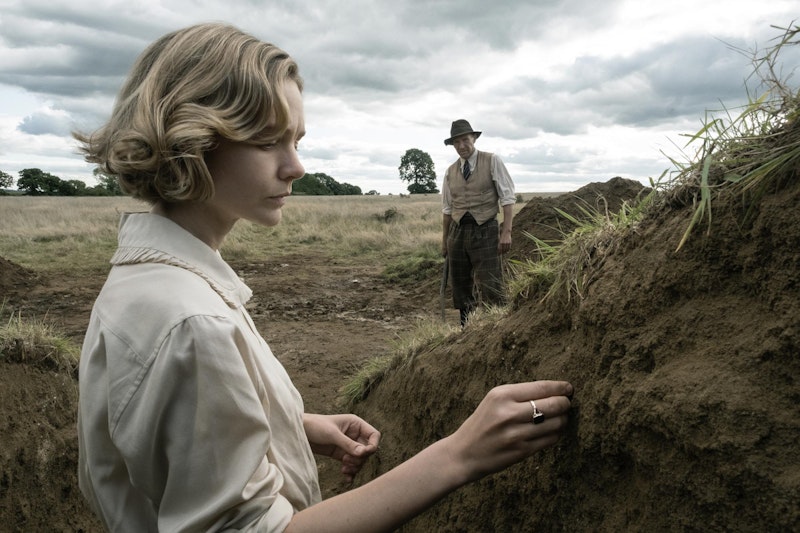 If you’re an archeological history buff, you're in for a treat with The Dig, a new dramatic movie that hits Netflix today after a brief theatrical run. Everyone else? Probably boring. The film, directed by Simon Stone and based on the historical novel of the same name by John Preston, concerns the Sutton Hoo excavation, a dig that took place in the English countryside in 1939. Edith Pretty (Carey Mulligan) is an English aristocrat, widowed with a young son (Archie Barnes) and living on an estate called Sutton Hoo, where there are various lumps of dirt indicating that something’s been buried there for a while.

Edith enlists the unorthodox archeologist Basil Brown (Ralph Fiennes) to dig up burial mounds on the estate, a project that ultimately discovered the remains of a ship from the seventh century. After the find, it kicks off a battle for credit between the outsider Brown and the traditional archeological establishment—one that would continue years after all of them were dead.

The estate is handsomely photographed by director of photography Mike Eley. But the tone is very low-key, especially for the movie’s initial third. It picks up when more members of the dig team arrive, including a mismatched couple (Ben Chaplin and Lily James), and Edith's cousin (Johnny Flynn.) In fact, I was considerably more invested in the love triangle among the latter three than by anything involving Edith, Basil, or the dig. And it appears the James character was made interesting for a reason—the character is based on Margaret Guido, a famous archeologist who turns out to be the aunt of John Preston, the author of the source material.

Mulligan’s good, in a radically different role than her recent turn in Promising Young Woman, although one gets the sense that the role was meant for an older actress; Nicole Kidman was originally lined up for the part. Fiennes, meanwhile, does quiet work, as a man that the film convincingly argues hasn’t been given his fair due by history.

That these events took place immediately prior to the start of World War II serve to make the story of the film look insignificant by comparison. And we find out in a title card at the end that, since the war got underway shortly after the dig took place, the findings of it were successfully hidden away in London during the war, and preserved. The story of how that happened sounds fascinating, raising the question of why we don't see that happen.

Speaking of movies about extraordinary human achievement from the middle decades of the 20th century, this weekend also sees the release of Apollo 11: Quarantine, a short film that serves as a sequel/companion to Apollo 11, my pick for the best documentary of 2019.

Directed by Todd Douglas Miller, Apollo 11 was built entirely from large-format archival footage of the Apollo 11 mission that had been sitting in NASA’s vaults for the previous five decades. The 2019 film, which managed to draw great drama from events that just about everyone over a certain age knows backward and forward, drew considerable acclaim, even though it was denied an Oscar nomination. The Quarantine sequel, which runs about 25 minutes, focuses on the 21-day quarantine that the Apollo 11 astronauts endured following their mission. These events were covered in the first film, although it gets expanded treatment here.

While there’s compelling footage presented in the short, the quarantine period was far from the most interesting aspect of the moon mission. This film’s release, which goes to IMAX first and then VOD, has two purposes: It’s topical, now that the word “quarantine” is part of our everyday vernacular, and as a live-action short, it’ll have a shot at the Oscar glory that was denied to its full-length predecessor.