Sons of Anarchy as Prefab Drama 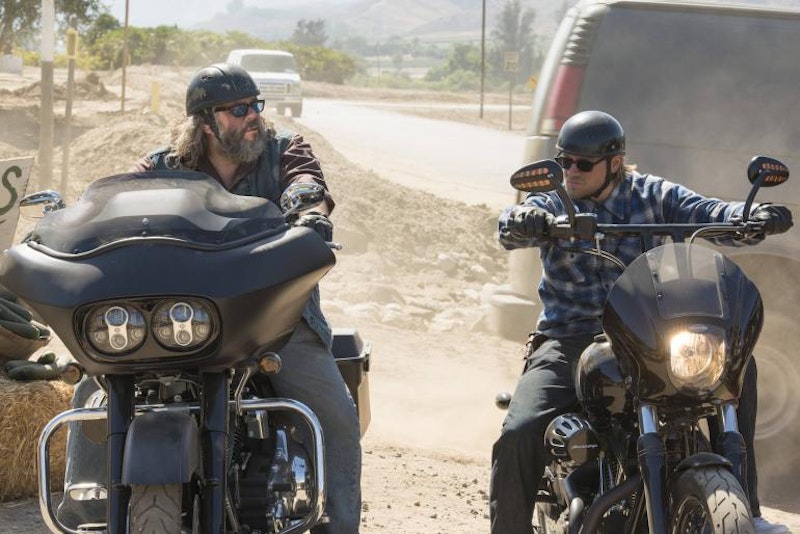 Jump ahead almost a year and we’re now two episodes in to SoA’s last season. I could brag that I got it right last November, Tara was the next to die, but any fan, I think, saw that coming—though I doubt anyone guessed Gemma would try to drown her in the sink then stab her repeatedly with a grill fork; even by SoA standards that was brutal. Remember that Tara had made a deal with DA Patterson to sell out SAMCRO in return for protective custody. Jax, in turn, had realized that Tara was right: to save his family—and SAMCRO—he offered himself up; 10-20 for those he loved, though we knew that Kurt Sutter & co. would never let that happen. There are no happy endings on SoA. And besides, you can’t have Jax spend the last season in jail.

Season seven starts 10 days after Jax finds Tara dead on the kitchen floor. The truce between SAMCRO, the Mayans and Lin’s Chinese mafia is holding, albeit tentatively, mostly thanks to Nero. Enter Gemma, who tells Jax that the day Tara was killed she saw one of Lin’s street crew leaving her house. What Gemma was doing there, why she didn’t go in to check on Tara and why it took her 10 days to tell anyone goes unquestioned. “He needs this,” Gemma tells Juice. “Closure.” Apparently she’s now naive enough to think that Jax will stop at just one dead Chinese. Convinced that Lin ordered the hit on Tara in retaliation for SAMCRO handing off IRA gun shipments to the Niners, Jax goes full psycho—he won’t stop until Lin and the Chinese mafia are all dead. No one in SAMCRO—not even Chibs or Bobby, the most reliably reasonable of the crew—offers any argument. Voilà! Season seven writes itself. Cue the music montage. Jax will learn the truth. Juice will die. Gemma will die. Everyone will die.

Impressively, season seven’s second episode offers a rare scene of character development, with Nero and Jax’s ex-junkie ex-wife Wendy talking about kids and AA and how hard it is to be decent and live right when you surround yourself with a bunch of ruthless bikers who kill all the time. So true. Though scenes like this—you know, the good scenes—are just an unfortunate reminder that SoA started off as a pretty decent show. The likable and well-written characters are so minor at this point: Nero, Wendy, Unser. No one’s watching anymore because we root for Jax or SAMCRO; we’re watching because it’s the last season, and finally the crew will get what’s coming to them. Please though, don’t confuse that with quality drama.