My Semi-Buddhist Interpretation of Pulp Fiction

The bullet came back to him. 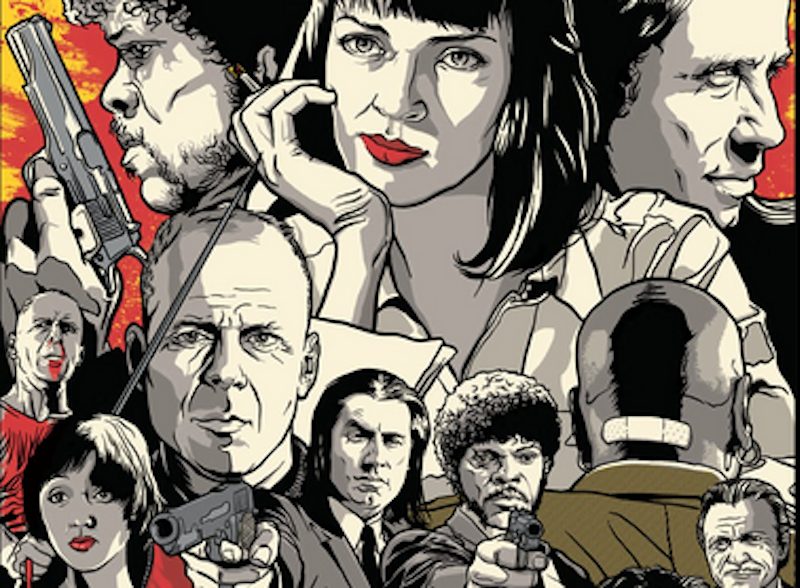 I was always timid about interpreting Pulp Fiction, because the practice seemed like a highbrow or cutting-edge thing to do, the preserve of kids who had done well on the college literary magazine and could read Susan Minot or Steve Erickson. And also because the first time I saw the film, I didn't get that the chronology was scrambled. That's a big thing to miss.

I have no defense, just an explanation. Plots have always been tough for me, even The Rockford Files. When I went to see the big new film, I was willing to let slide various continuity glitches so I could keep up with the dialogue. That was the stuff I liked, and the script kept it flying at you from different directions, conceptually speaking. So I was listening to the dialogue and witnessing the noisy set pieces with the splattered brains and the pointed guns, things that take up a lot of brain space because of their immediacy. Continuity got squeezed out.

I figured that everything added up in some fancy way, and I wouldn't mess with it. Except it did seem far-fetched that John Travolta could get revived after Bruce Willis shot him full of bullets. That was very quick medical work given... what was the timeline? Everything was in a couple of days, I thought, 48 hours or so, and there was Travolta again in the diner.

I mentioned my concern to a co-worker—fortunately, a person with good manners and a kindly disposition. He blinked at me, and then faced up to the situation. “You realize,” he said, “that the action is not strictly chronological.” The diner scene happened before Travolta went on his date with Mia and before he got shot. It came at the end of the film because the movie pulled the trick of scrambling its scenes, showing them with no regard to where they came in the order of events. My co-worker knew this, but he had done well on the college literary magazine and liked Susan Minot.

The 1990s wore on and I watched videos at home. On a Sunday afternoon I reflected that Pulp Fiction, laid out, tells the story of how a hood shoots a gun and has the bullet come back to him. The hood is Travolta, Vincent Vega. He leans back across the car seat to make conversation with a poor chump, and he does this holding a loaded gun. Because Vega isn't paying attention, the gun goes off and the chump in the backseat gets splattered. (It's funny, really funny, which makes for an odd effect. There's the shock of the brutality, and then there's the awareness that you're laughing at it, like the awareness that your ears are ringing after a bomb goes off.)

The mess has to be cleaned up, and Vincent gets steamed because he's ordered around and told not to get the towels bloody. He's not the most mature man, of course. He's a person who lives by violence and imposing on others, and now he's fucked things royally and has to pay the price, and he’ll never really get that that's fair. He talks back to Winston Wolfe, and he bitches furiously as he wipes the blood off the car's windshield. “My needle's in the red, Jules,” he tells his partner, face getting bigger. When he's the reason they have to do the cleanup.

Then Winston Wolfe hoses him down and dresses him in dork clothing, those dumb shorts and a t-shirt that says something. Vincent makes it back to headquarters, where Bruce Willis stares at him because of the clothes. Vincent is mad from his screw-up, so he insults Willis. Some long scenes later we have Willis facing Travolta and letting loose with the high-powered assault weapon in his hands. The bullet found its way back.

Such was the plan that fell into my vision that Sunday afternoon. At work I tried to explain it to a colleague, this one a leggy young woman who wrote freelance items about clubs downtown. But my attempt got nowhere. It was like I had tried to dance and found out that I had no hips or knees, just nothing in the movable joints department. Interpretation of Pulp Fiction was not my thing. (This colleague read Raymond Chandler, somebody who doesn't mess with plot but whom I still can't get. Apparently his sentences have a special quality.)

It did seem to me that my version of events had a Buddhist feel, given the way continuity is unscrewed to show its true course, a course that turns out to be violence recoiling back on its perpetrator, the man with ungoverned emotions. This Buddhist angle winked at me, tempting. A heavyweight Tarantino movie, a new classic, might have Buddhism socked away in the middle of it. The possibility seemed like a credential for my idea; I had hit on the sort of thing that should be in a cutting-edge interpretation. Of course, Buddhism was getting a lot of attention in magazines back then.

Before the 90s ended, I watched the film another time. I decided that I had sold myself a story. Look at Vincent and Jules in the diner after the big cleanup—they're bantering. Vincent has sucked it up and shaken Mr. Wolfe's hand with proper gratitude, and now he's telling Jules how good ham tastes. There's also the fact that Bruce Willis, or his character, needs no special motive to shoot Vincent dead. Vincent's there to kill him.

I just saw the movie again, many years later. I'm struck by how careless Vincent is with his gun. He kills by accident, and then he gets shot because he lays his gun down for anybody to grab while he wanders off to the john. He's careless with himself, a sensual slob who will shoot heroin into his arm so he can wallow on a vibe. He's got a big dick and a big gut, and life falls pretty much the way he wants it as long as he doesn't piss off the boss.

But maybe this is all acting coach stuff, not really an interpretation of theme. Tarantino says Pulp Fiction was written to take ancient crime movie clichés and get some new angles on them: the boxer who doesn't throw the fight, the gunsel who has to take out the boss's gal. Vincent is the flunky who sneers and gets killed. In plenty of action films the hero gets disrespected early on by a flunky of the villain. This is not necessarily anyone big, just somebody with a mouth. Later, when the action heats up, the hero blows him away. The hero would’ve killed the guy anyway, but we get an extra kick because it's that asshole from before, the jerk. Pulp Fiction tells how Vincent Vega, not the worst guy, becomes the jerk flunky who's shot in the hero's movie.

Or maybe not. I'll never know. But at least I won't have to read Susan Minot or Steve Erickson.