Abstinence and reticence in Lost in Translation. 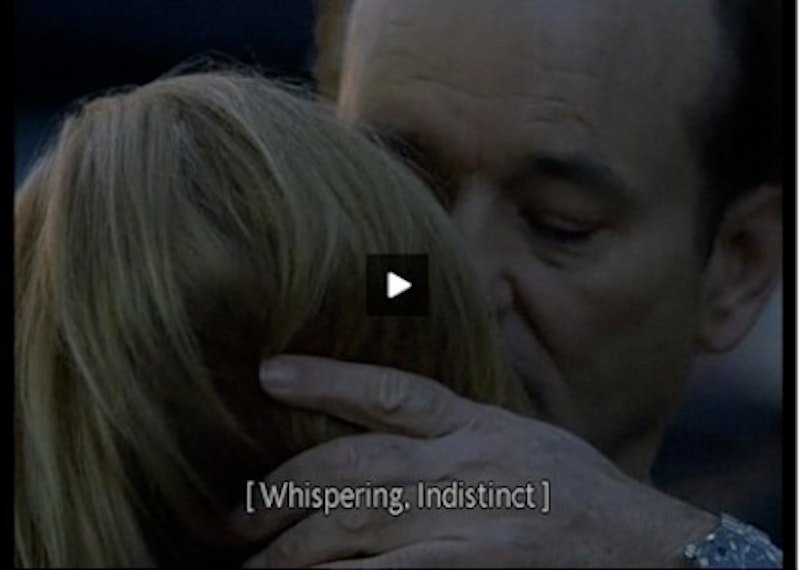 Like many, I watched Lost in Translation (2003) and enjoyed it for its generic "artsy feel" and aesthetic pleasantness. Sofia Coppola (dir.) kind of annoys me in real life—of course, I'm projecting abstractly—so I didn't give the film much thought until lately, when it arrived via Netflix. Evidently, I had put it in my queue, in a fickle and haphazard way.

I only want to talk about the ending, that beautiful moment so crisp under the camera's lens as if we experienced it ourselves, which is art's grand gift. Bill Murray spots Scarlett Johansson, visibly devastated, in a crowded street moments after a detached and awkward farewell. He gets out of the cab, grabs her by the arm, turns her around, and whispers something which makes her cry with a sadness that is existentially happy and profound. Johansson is a great actor to convey this feeling. The whisper, the secret between them, is a metaphor for the entire film. The audience is pushed aside and grouped with the annoying side of the world that doesn't understand, which is both mean and effective on the part of Coppola.

Leave it up to the Internet to tell you what Murray whispered. What was in the script, if there even was a line, seems to matter less and less. Perhaps Bill ad-libbed something to Johansson, the script parenthetically calling for a whisper, and part of her expression and tears were "real." Where the writing ends and reading begins is blurred, and the audience is empowered to fill in the blanks. A lip-reader might argue, but fortunately there aren't many lip-readers around. I'd like to believe that Murray said what one discussion forum claimed:

"I love you. Don't ever forget to keep telling the truth."

That would’ve been nice. If I were a girl going back to her life, a slow life in limbo that had barely begun, I too would have cried if an older man who I maybe loved said that. If I were the man, I would enter the plane and feel glad I said such a thing. I would go back to my wife and know I was a good man for saying that. Emails and texts would never be exchanged, only memories. The universe is held together with sentences like that, shared by broken yet whole people. We could all be this way—save sex, desire, and the real world at large. The characters’ sexual abstinence stems from the same place as Murray’s spoken yet undecipherable reticence.

Girls with daddy issues tend to love this film, with Murray as the surrogate father, asexual, judgeless, and loving. We all know who Sofia Coppola's father is, and while I hate to reduce her to a psychological archetype, I think this movie has a lot to do with their relationship. We all want to be understood, loved entirely without expectation, desire, or conquest. Sex in many ways is the opposite of love. This may well be a sci-fi movie, a galaxy apart from life, which is sad, how inhuman (better) Murray’s love is. I kind of want him to be my dad as well. I'd go to his hotel room and fall asleep next to him, curled into myself. He could touch my feet, to see if I was still there.