Battle over the Bulge

In the midst of the papers Star Trek creator Gene Roddenberry donated to UCLA are many memos and letters concerned with William Shatner's ever expanding gut. 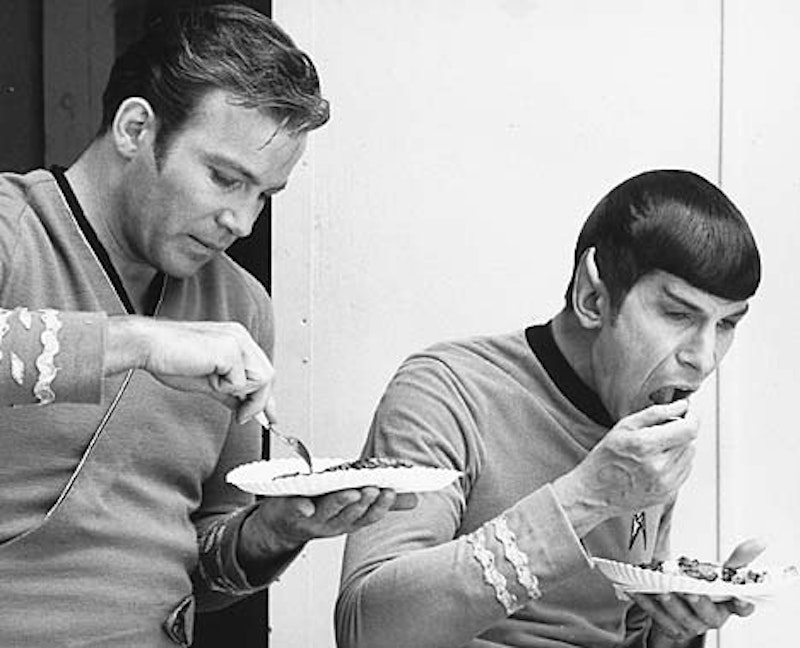 Once a small circle of people found themselves wondering, as a business matter, how they could keep Bill Shatner from getting fat. They were the producers of Star Trek, and they wrote letters and memos about the problem. Some of these documents, probably not all of them, have survived and can be read at UCLA. They’re buried in the 35 boxes of letters, memos, call sheets, daily status reports, dubbing reports, scripts, revised scripts, story outlines, revised story outlines and newspaper clippings that Gene Roddenberry, Star Trek’s creator, gave to the university.

Today we can see Capt. Kirk’s gut as a sign of Shatner being Shatner, the unique and bumptious animal that he is. We’re glad Kirk’s stomach is there. It’s the sort of thing you start looking for the second or third or fourth time you watch an episode, when you’re settling into the fan habit. But that’s now. Nobody knew what lay ahead, and the producers wanted that gut eliminated. The UCLA archives, though incomplete, provide us with a few highlights of the Shatner-Roddenberry bulge drama.

First, we have a memo sent to Roddenberry on May 25, 1966, when the first season had just started shooting. The memo is from Herbert Solow, Desilu’s executive in charge of producing new TV series, and mentions Solow’s assistant, Morris Chapnick: “As you know, Morris has been concentrating on setting up some sort of gymnasium for Bill Shatner to use. The thought he had was to set up the equipment in one part of the double dressing room that we were using as a men’s lounge.” So it would appear that, at the start, Shatner was willing to keep the weight off and that the studio was willing to devote space to that project.
Next, a letter from Roddenberry to his star. It’s dated March 23, 1967, a month or so after the conclusion of the show’s first season of filming, and was sent to Shatner while he shot the movie White Comanche in Spain. The letter is two pages long and begins with a leisurely discussion of Shatner’s acting strengths. Roddenberry tells Shatner that “City on the Edge of Forever” (the time travel episode where Joan Collins must die so Hitler may be defeated) was a great hit when screened by network executives. “The love story comes off magnificently and you were never better!” Roddenberry says. “You played it quietly with a dimensional intensity that is going to have the audience loving and then agonizing with you as they seldom do with an actor in a television drama. Congratulations.”

Then: “In fact, you were so good that the audience may miss in this Episode the fact that you have been in these last Episodes of the year showing your weight a little too much. The face seems to have tightened up and looks extremely good in Medium Close and Close Shots, but we find ourselves having to stay away from Longer Shots wherever possible, as the simple plain lines of our basic costume render most unflattering any extra poundage around the waste.” Note that capitalization and the spelling of “waist” are per the original. Roddenberry continues: “I do get concerned about this, Bill, since we are playing to an audience that is most weight conscious today—and also very youth conscious, the whole nation has gone in that direction, and poundage adds years photographically.”

In a letter of the same date, Roddenberry reports to Joel Briskin, one of Shatner’s agents: “Attached a copy of a letter recently sent to Bill. The important part of it concerns his weight. I didn’t hit him hard about it, as I have learned from long experience with Bill that when he is working it’s not fair to make him self-conscious about this fact. We are going to have to lean on him, however, from several directions and get him to do something about it because he has in many films in the last half of the season looked actually fat and at least ten years older than he looks when he is trim and slim… He is very, very good and getting better every week as Captain Kirk. But we’re all going to lose something if he doesn’t slim down.”

The story resumes 11 months later, during the hiatus between seasons two and three. In a memo to Eddie Milkis, one of the show’s associate producers, Roddenberry says, “We were going to select a particularly unflattering face here and a full belly body view and send them to Shatner without comment. I think we should get the clips available so that they can be sent the moment we hear about a pick up.” The subject line of the memo is a playful “Photos of Shatner’s Equator.”

Next we have a memo dated May 8, 1968, and sent to Roddenberry by Robert Justman, co-producer of the show’s third season. Justman opens by implying that new producer Fred Freiberger, who had been brought in to oversee the series while Roddenberry worked on film deals, could use some bolstering in the face of Shatner’s demands. “Bill is as rapacious an animal as any other leading man in a series,” Justman writes, “and I think it would help Freddie enormously in his relationships [sic] with Bill if you let Bill understand how much confidence you have in Fred and how much respect that you, Gene Roddenberry, have for Freddie’s creative talents and executive abilities.” Then the perennial problem resurfaces: “It also might be a good way to get a fairly close look at Bill and see what sort of physical shape he is in at the present time. Come to think of it, perhaps it would be a good idea to have this get together before the end of this week, so that if Bill is on the pudgy side, it can be suggested that he start slimming down right away.”

Finally, there is another Roddenberry memo to Eddie Milkis, this one dated May 21, 1968. “I think we must bring Shatner’s weight problem and the result of it on film to Shatner’s attention,” Roddenberry says. “You will remember we once talked about finding some unflattering film clips where belly, face, etc., made the angle unuseable [sic] or almost unuseable. We discussed having an inexpensive print made of three or four such angles, sending it to him from the producer or myself with a friendly note, even at the risk of shaking him up a bit. Many who saw the Emmy Awards commented that he appeared very heavy. Even though he has taken off a little poundage since the end of last season, if he follows his usual pattern of putting it on again we are likely to have him heavier than ever before long. If Bob and Fred like the idea of proceeding in this direction, we’d better get it done fast.”

Did they succeed? Consider that, almost two decades later, Roddenberry took pains to stipulate that his next starship captain would have to be in “top physical shape.” Or you can take a look at “The Lights of Zetar” or “Requiem for Methuselah” or other third season episodes. Or Iron Chef, for that matter. Apparently Shatner, that outstandingly rapacious animal of a leading man, could not be curbed. And if he could have been, he would not have been Shatner.