Tom McCarthy's Win Win will save us from the likes of The King's Speech. 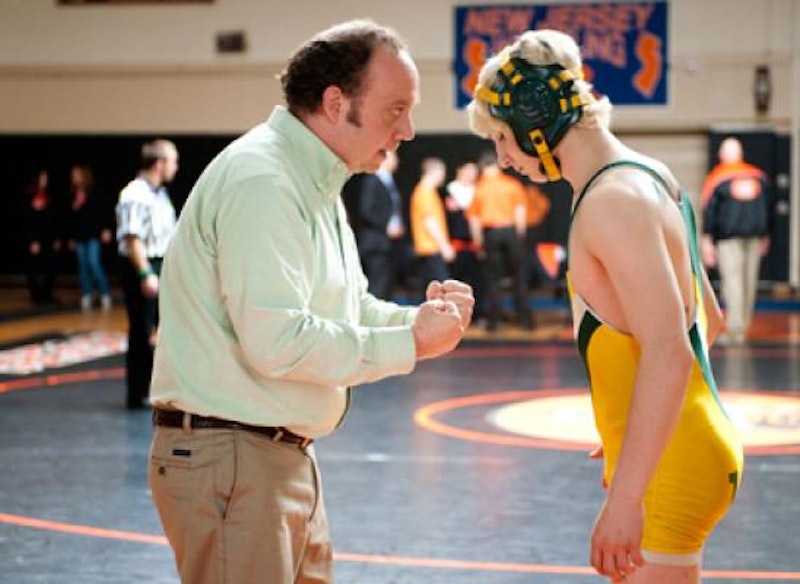 In 1942, after they'd bowdlerized his second film, terminated his employment, and nourished a false whisper campaign about recklessness and debauchery that would torpedo his career as a Hollywood film director, RKO Pictures took one final swing at Orson Welles. They made their official motto for the next year "Showmanship in Place of Genius." It was a bizarrely honest declaration of philistinism that seems quaint in retrospect. These days they just call showmanship genius and trust that by now everyone is too debased to tell the difference. The raw tonnage of acclaim heaped on such empty twaddle as The King's Speech, Inception, and The Social Network would seem to honor that trust.

We have a chance, though, as an audience, to redeem ourselves. An opportunity to show that we are not so swayed by the antics of the cynical, the smart-aleck, and the smirking manipulative salesmen that pass themselves off as filmmakers that we are blind to True Quality when it’s presented to us. The opportunity I speak of is the rolling release of Win Win, the new film from Tom McCarthy, writer/director of such small marvels as The Station Agent and The Visitor. Starting March 18 in New York and Los Angeles, and through the nationwide release on April 8, we’ll all get our shot at paying tribute to McCarthy for an overdue and well-deserved sleeper hit.

McCarthy’s films do not seem like they should work. His scenarios, under the hand of a lesser artist, would fall quickly into cloying sentimentality or didactic messaging. The Station Agent: A reclusive man with dwarfism moves to a small, abandoned train depot in the middle of nowhere left to him by a late friend, and learns to overcome his fear of prejudice and open himself up to human interaction. The Visitor: A bourgeois college professor and widower finds a pair of undocumented immigrants living in his second home, and through his relationship with them confronts first-hand the problems with immigration law in the U.S. McCarthy walks the razor's edge—he attacks these stories with such directness and honesty that though we wait for him to succumb to clichéd hackery or manipulative dishonesty, he never misses a step. And we are left breathless by the high-wire act that, through his consummate artistry and hard work, he makes look so easy that anyone should be able to do it.

Win Win sounds similarly iffy to the jaded mind. It's the timely drama of Mike Flaherty (Paul Giamatti), a lawyer with a struggling private practice in a small New Jersey community who coaches the local high school's perpetually-losing wrestling team, and whose money troubles in the depressed economy have wound him up into a debilitating state of stress. Out of desperation to provide for his family and save face in front of his strong-of-character and hot-tempered wife Jackie (Amy Ryan), Mike slides down the slippery slope of floating ethics and rationalized deceit, and takes advantage of a wealthy, mentally incapacitated client to earn extra money on the side. His machinations bring the client's grandson, Kyle (Alex Shaffer) unexpectedly into his orbit, a taciturn, angry, but good-hearted teenager who just happens to be a champion wrestler. Mike and Jackie take Kyle in off the doorstep, and Mike begins winning on all fronts—at work, home, and in the ring. But as complications pile on, including Kyle's estranged mother (Melanie Lynskey) coming to town to track down her son, Mike finds that juggling lies is no less stressful than worrying about the rent.

If that description makes you fearful of a mawkish, ham-handed family drama spun from a sitcom-esque setup, I don't blame you. But as with McCarthy's first two films, he makes it work by refusing to give in to easy clichés. His characters are not pre-chewed stereotypes playing out a predetermined structure. Moments that in lesser films would be rousing crowd-pleaser turns-of-events—an impassioned speech from a coach to an athlete, the hatching of a clever plan, a steely declaration of resolve to Do The Right Thing—are, in Win Win, exposed as empty, fake, or insufficient moments. Instead, there are the moments in which characters confront the reality of their lives with honesty and humility, and engage in the complex, unending, and often burdensome process of living correctly.

This is an audience's movie; it is genuinely entertaining, with more outright comedy than either of McCarthy's previous films. Almost everyone gets a turn providing some light-hearted patter, but the primary laughs come from Station Agent alumnus Bobby Cannavale as Mike's college friend Terry (an alternately pathetic and empathetic portrait of the over-preened yuppie male) and from the brilliant Jeffrey Tambor as Mike's assistant coach.

McCarthy's major flaw is an ennobling flaw, and it is this: his visual style is not overwhelming. He directs his films with a very plain eye, resorting to over-the-shoulder back-and-forth shots for conversations, unremarkable framing of most events, and naturalistic, even lighting in most cases. Some may shriek that without an evident visual personality, McCarthy's films cannot be great. That, at best, they are illustrated literature, and that McCarthy might as well have written a novel or a play for all his achievement has to do with cinema.

McCarthy is not a genius director, and he has enough sense and humility to realize that. Rather than follow in the steps of an insecure artiste like Tom Hooper—who adorned the anemic fakery of The King's Speech with hideously self-conscious compositions that distracted and screamed "Look at me! I'm directing!"—McCarthy puts the camera where it will best follow the action, and then gets out of the way of his story and his actors. That he does not feel the need to force his actors into unnatural poses, or place them in the corner of a frame while focusing the center of the image on overcooked background design, is a sign of a sure, confident, and honest talent at work.