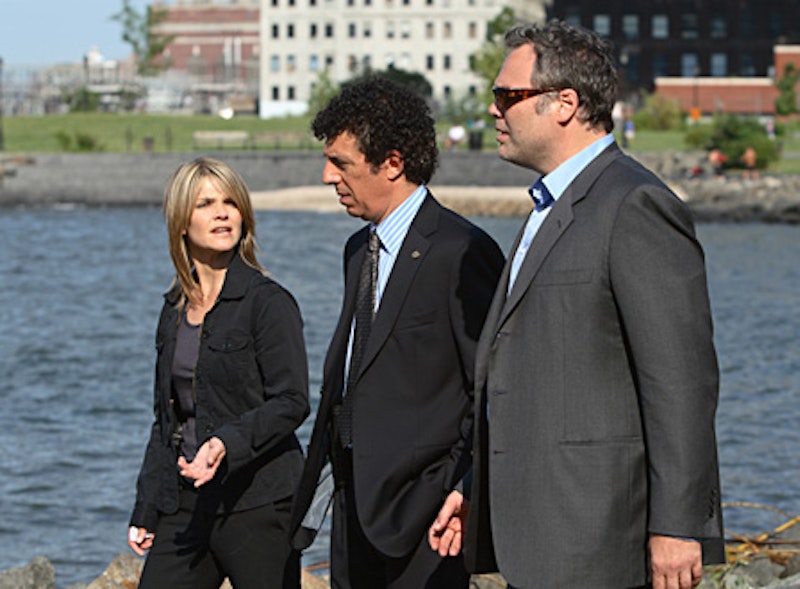 For longtime fans of Law & Order: Criminal Intent, the show’s last two seasons have been something of a vicarious emotional rollercoaster. After laying the Mutt’n’Jeff bassline over five solid years and honing it almost beyond the point of perfection—brilliant, borderline-nuts Detective Goren (Vincent D’Onofrio) and Detective Eames (Kathryn Erbe), plain-Jane Goren-whisperer, close tough cases by sussing out perps’ psyches, with Captain James Deakins (Jamey Sheridan) dryly directing traffic and the sartorially gifted D.A. Ron Carver (Courtney B. Vance) looking down his nose at their gut feelings when not simply modeling expensive haberdashery—before everything went to hell.

You can blame D’Onofrio’s real-life, on-set breakdowns for the program moving into the two-detectives one week, two-different-detectives the next week format, or the ratings slump that almost did the show in before the USA Network rescued it from the scrapheap; blame whoever or whatever you want, but after a while it became difficult to keep up with what was going on, which detective was written out permanently or maybe just on maternity leave.

Dude, Chris Noth! And did Goren go mental? Was that Eric Bogosian playing an honest-to-goodness authority figure? Was Jeff Goldblum riffing, however obliquely, on his Jurassic Park character? Did Goren’s mentor go mental, and off Goren’s longtime antagonist Nicole Wallace (Olivia d’Abo)? He totally did. And a bunch of characters just disappeared with no explanation, which is always suspect—not to mention unforgivable. Anyway, it was all pretty insane, a peaking crescendo of plotline avalanches that looked and smelled like the writing staff struggling towards some kind of artificial conclusion for the series, some easy way out in case USA decided it was time to finally put the franchise out to pasture.

Season nine’s two-part opener—in which Bogosian bit it under mysterious and unsatisfactory circumstances and Eames had to fucking fire Goren—almost made up for the last several seasons’ shenanigans, ushering Erbe and D’Onofrio out and making way for more of Goldblum’s bemused, muppet-like glare.

Until now: because Season 10 is where Criminal Intent’s ride ends, and Erbe and D’Onofrio are back in the saddle. It’s likely that the syndication rights for this season were pre-sold, and the powers-that-be lured the original talent back for one last hurrah. But that parting scene where Goren and Eames exchange teary goodbyes and share an awkward embrace is going to be hard to top, in the same way that it’s hard to rekindle friendships ravaged by distance, circumstance, and time. How do you take this pair out with a bang? Do they go The Wire style, tucking into a granular, season-long investigation tracking and trading criminological wits with some new mastermind who’s perpetually 10 steps ahead?

Do we pick up with Goren fresh out of a psych ward, attempting to prove to Eames and himself that he can still cut the sleuthing mustard, that he’s not really a danger to himself and others? My bet is that this last season of Criminal Intent attempts to replicate the cerebral vibe of those early seasons, when everything was relatively simple: yeah, maybe Goren was a unconventional in his approach, and maybe Eames was kind of a hat rack in comparison, and the captain didn’t trust the pair’s investigative approach, but it was a calculated risk. No fireworks. No tension-ratcheting run-up to a cataclysmic showdown. Just solid, solicitous, smarty-pants detective work, then drolly and unceremoniously out—kind of like Jerry Orbach’s last episode of Law & Order. That’s an aloha everyone could be proud of.