Race to The Bottom 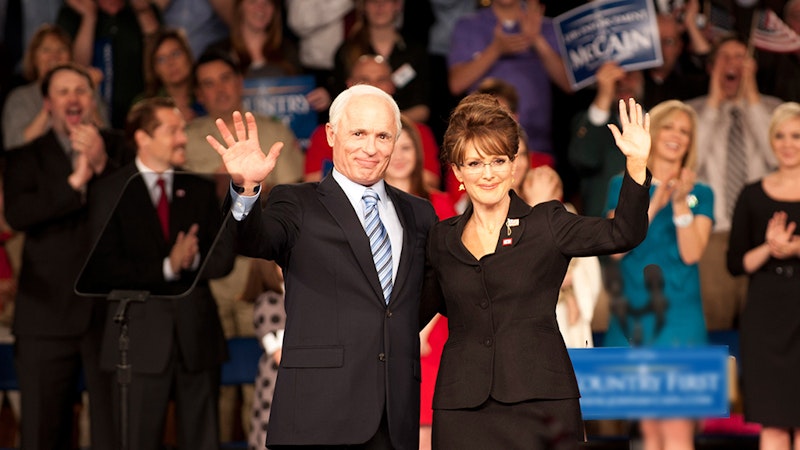 Now the public has a better idea of whom to blame for Sarah Palin: Steve Schmidt. Played by Woody Harrelson in HBO’s original film Game Change, Schmidt and his team are the ones who found and puffed up Palin as a (here’s your barf bag) “game-changing” VP pick for John McCain when he would surely lose with a milquetoast running mate like Mitt Romney, Tim Pawlenty, or Joe Lieberman. They hardly vet her at all, and it’s only right before the convention that Schmidt discovers Palin can’t tell North and South Korea apart and thinks the Queen runs the English military. Not only did he introduce and effectively super glue a dumb, close-minded bigot into mass consciousness, he connected her to a system of equally scared and backwards fundies that will feed her elephantine ego and keep it nicely plump for years to come. Thanks, Steve.

Game Change is a fascinating look at how people react when their bubbles are popped. Social conservatives like Palin and her brood in Wasilla live small, cloistered existences, fearing God, gays, Muslims, Jews, and astrophysicists with equal zeal. It’s amazing to watch Palin go catatonic and completely revert to the behavior of a five-year-old when getting debate prepped, or how she flips and screams at her advisors after her legendarily awful interview with Katie Couric. She knows how fucking stupid she is. It gets her down. But it mostly makes her angry. Here we see the beginning of the last four years of divisive, misleading talking points (death panels, Kenya, the Real America, “he’s not like us”) and Palin’s enthusiastic promotion of willful ignorance. That is what makes Palin and everyone who abides by her word extremely dangerous: they are regressive. They want to mold the world to better fit their stupid, devolved bubble where knowledge is treason. The mistake Schmidt and his team made endures to this day because Palin gives voice and credibility to people who want to reject science, information, and the secular, humanist ethics that conflict so completely with their retarded way of life.

The acting in Game Change is phenomenal and the filmmakers keep the sarcasm light (unlike Oliver Stone’s W). Julianne Moore nails it in every way, especially Palin’s bizarre mutated Minnesota Nice accent and her physical rigidness. Ed Harris is also great as McCain, with a perfectly rickety gait and a face of a thousand wrinkles. The voice’s texture is right but it’s not high enough—he also doesn’t say “my friends” at all (?). The best part about Game Change is it’s not a hit job or an embarrassing victory lap. If you take the movie and the book’s anonymous sourcing at face value (FWIW, Steve Schmidt said watching Game Change “felt like an out of body experience,” and confirmed specific scenes and conversations like the Queen reveal), it’s about as fair a portrait as can be done of such a polarizing figure. As the election draws nearer, McCain starts seeing more and more disturbing stuff at his rallies—mention Obama, you get cries of “Muslim!” “Terrorist!” “Socialist!” “Arab!” McCain’s totally rattled but Palin just soaks it up and spits it back out, because she’s scared too. She doesn’t want a dark-skinned president. It doesn’t jive with the Bible Bubble. This is where we’re at today, and it’s why you have debates about contraception, abortion, and gay kids killing themselves: because Neanderthals are legitimized and given a national microphone by people like Palin, Michele Bachmann, and Rick Santorum, who are scared shitless their false, destructive, and abusive way of life will lose all its power and influence within the next century. They don’t know what to do without their hate. Sarah Palin refuses to learn or enlighten herself throughout Game Change, and since 2008 has continued to proudly flaunt her under-education and severe under-qualification for nearly every position she’s ever held. She is a stain, and the way she thinks is malignant. W kicked an already inoculated man while he was down. Game Change is about the war we fight today: between those who know, and those who don’t want to know.