Moving toward the infinite with Tarkovsky and Stalker (1979). 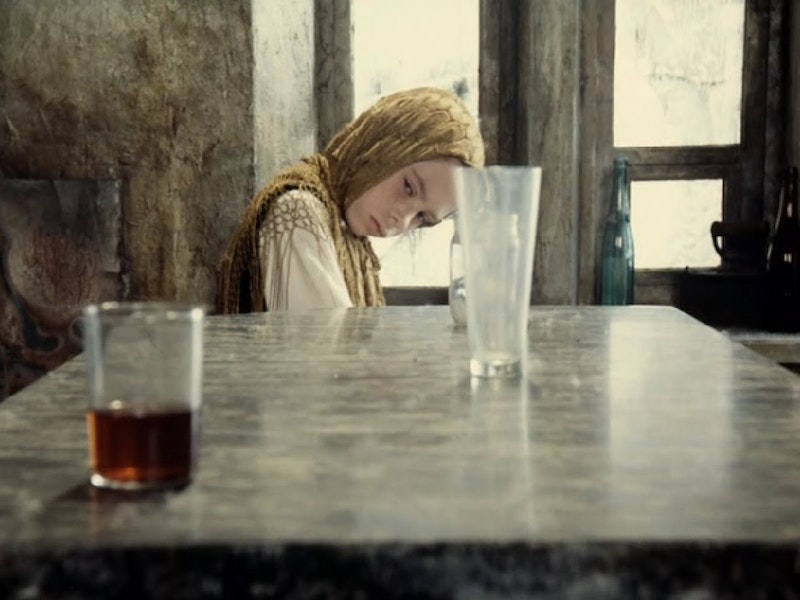 By nature, human beings are restless. We’re always searching for something that will give us an answer for our existential troubles. Sometimes, these answers and ensued actions are rarely in harmony with the rest of our wholistic being. More earthly pleasures and solutions don’t necessarily bring forth solutions. As we gain knowledge, our sorrow too increases. In his famous work, Confessions, St. Augustine (speaking to God) writes, “You have made us for yourself, and our hearts are restless, until they find rest in you.”

This seemingly simple statement encapsulates the main theme of Andrei Tarkovsky’s film, Stalker (1979). Loosely based on a novel by Boris and Arkady Strugatsky, Roadside Picnic, Stalker is a tale about the promised land of a better life and the journey into the restricted place called the Zone. In this Zone, there’s a place called the Room, in which one’s most authentic desires come true. But getting to the Zone isn’t easy.

There are three main characters without names: Stalker, who’s a guide through the dangerous territory that leads into the Zone; the Writer, who’s lost inspiration and is seeking to get it back; and the Scientist, who’s yearning to make the great scientific discovery.

In typical Tarkovsky fashion, the scenes unfold at an incredibly slow pace. All of his films are like this, in some way or the other, but with Stalker Tarkovsky takes the notion of time to a much higher and metaphysical level. The opening scene alone is one continuous shot of camera’s lens entering the house and the room in which Stalker and his wife and daughter reside.

As Stalker leads Writer and Scientist through the territories that lead up to the Room, we observe their worn-out faces, silences, and frustrations in the midst of a decaying land. The landscape is mixed in with beautiful trees and meadows but everything’s overgrown and in addition, overtaken by abandoned concrete buildings that have the patina and stain of totalitarian and dystopian handiwork. The territories are marked by artifacts denoting human condition: guns, needles, crosses and religious icons. The sacred, the profane, and the vulgar are all in an existential mess and as the journey progresses, it’s becoming harder to see the difference between these three aspects of life.

The characters are physically and metaphysically worn out. Stalker is fatigued in his constant effort to lead others to the Room, yet he continues to do so. There aren’t any glimpses of hope. Everything that surrounds the three characters is tinged with decay and destruction. Everything is a reminder of sorrow and perpetual attempts at annihilating what’s left of the human spirit.

As the film unfolds, it becomes clear that the hero, as understood in the Russian literary and philosophical context, is Stalker. We know that the Writer and the Scientist are seeking glory of the human mind, but what is he seeking? What possible need does Stalker have for leading troubled souls into the realm of an alleged desire fulfillment? The answer comes at the end.

After both the Writer and the Scientist refuse to enter the Room or authentically and humbly reflect on the meaning of their lives, Stalker aids their return into the same restrictive land that they were part of originally. He’s fatigued but not merely from the physical journey. He breaks down in front of his wife who comforts him. His pain is spiritual and as he cries like an innocent child, Stalker releases the great lament: why have people lost their faith?

Most of Tarkovsky’s films are either outright Christian allegories or at the very least, they’re concerned with man’s spiritual state. Stalker functions on many levels: physical, practical, existential, and spiritual. Physical spaces that are featured in the film in many ways correspond to the different realms of the human soul.

Dostoyevsky’s focus on sorrow, suffering, and inner spiritual struggle has made an impact on Tarkovsky’s work, and he often wondered why (at the time of his cinematic output) is “the state of ‘spiritual crisis’ so feared in contemporary Russia?” As a film director, Tarkovsky found the questions that arise in either the acceptance or rejection of spiritual life highly significant. For him, at the center of human existence is faith or lack thereof.

In Sculpting in Time: Reflections on the Cinema (1986), Tarkovsky observes: “I believe that it is always through spiritual crisis that healing occurs. A spiritual crisis is an attempt to find oneself, to acquire new faith. It is the apportioned lot of everyone whose objectives are on the spiritual plane. And how could it be otherwise when the soul yearns for harmony, and life is full of discordance. The dichotomy is the stimulus for movement, the source at once of our pain and of our hope: confirmation of our spiritual depths and potential. This, too, is what Stalker is about: the hero goes through moments of despair when his faith is shaken; but every time he comes to a renewed sense of his vocation to serve people who have lost their hopes and illusions.”

The authenticity of the Russian mind can’t escape its inherent mysticism and a desire that moves toward the spiritual realm. This is why totalitarianism or any forms of destructions were in such stark contrast not only during the dark existence of the Soviet Union, but also in Tarkovsky’s film itself. And yet, this film transcends its Russian particularity. Any great work of art (and Stalker certainly is) brings us into the realm that recognizes our common human condition.

In Stalker, we’re looking into the mirror of our own existence as well. Is our life examined? Do we care whether the soul is cared for? Do we rely on the external and profane forms to guide our daily lives, even when time is consistently undefined? Or do we seek the true spiritual state that recognizes the sacred and wholeheartedly rejects the profane and the vulgar as guides through the nihilistic landscapes that continuously make great impositions? What is the terra firma upon which we stand? Man might be a finite being, whose life will be punctuated by both joys and sorrows, but, as Tarkovsky reminds us, he also has the capacity to move toward the infinite, toward something outside of our self-centered and wounded selves.