Everyone in Alligator (1980) can’t stop teasing Robert Forster about his thinning hair. It’s so mean—but he needs to do something about it. 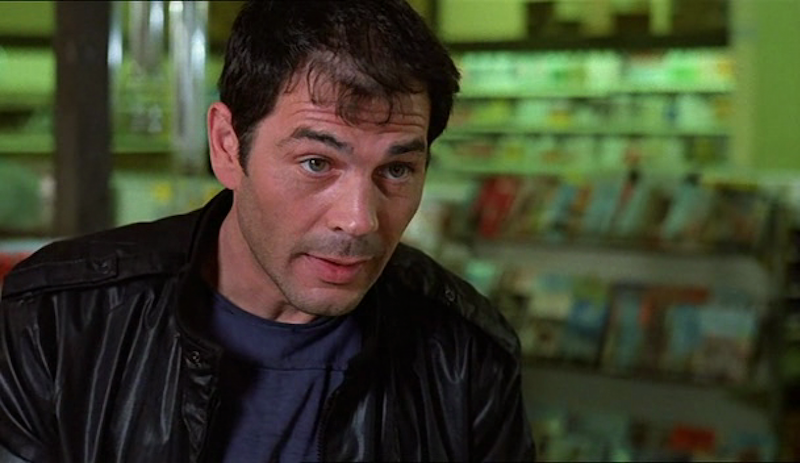 “I know exactly what you’re going through,” the pet store clerk tells Robert Forster, pointing at his thinning hair. “First you lose a bit in front, then a patch in the back…ah…” He expects some bald solidarity, but Forster is understandably terse. “Uh-huh. Thanks.” This is the introduction to Forster in Alligator, or Detective David Madison, a Chicago cop haunted by the loss of his partner in St. Louis. His name’s mud among other cops, and he’s teased a few times by his colleagues in Chicago. Forster as Madison is a man beaten down by the world, but not like in other movies—like men in real life. Lewis Teague directed the movie from John Sayles’ script, and it’s a notch above other contemporary horror and exploitation movies, particularly when it comes to Jaws rip-offs.

But it’s such an odd decision to not only begin with a protagonist losing his hair, but to make it a running “joke”—more like a thorn in his side. Forster, like John Wayne, is brilliant when playing outwardly strong men who are emotional disasters. Not even “strong and sensitive,” these are men mocked from all sides their entire life, and they honestly don’t know why. They try not to let it bother them or allow it manifest in their behavior, but it’s obvious just in the way that they carry themselves that it affects and hurts them. Forster had really lousy luck with his career for a long time, and John Ford brutalized Wayne’s psyche every chance he got. That insecurity and drive to deliver “like a man” is glowing in both men, particularly when they’re working under the wire.

Again, what’s going on with the hair situation? It’s a plot point only when reptile expert Marisa Kendall (Robin Riker) sleeps with Detective Madison and teases him about giving him a haircut, and he addresses the rug in the room (or lack thereof) for the only time in the movie: “Look, I get it, I’m a guy going through male pattern baldness, I’m kind of sensitive about it.” They have a nice night together. But it’s an emergency hair situation. Like don’t go out in public hair situation, let alone star in a movie. It’s not as bad as Ian McCulloch in Lucio Fulci’s Zombi, but it’s close. What Robert Forster in Alligator shows is that men are mocked and discriminated against every day because they’re losing their hair, and nothing’s changed in 42 years.

Kidding aside, it’s really a problem, the hairdo. Alligator is a great example of a movie where one insignificant detail eclipses the rest of it. The mutant alligator trawling the Chicago sewers, the giant mutant alligator that kills another partner on Forster’s watch, is an impressive piece of work and much more mobile and realistic than the infamously unreliable shark on Jaws. There’s little obscuring the alligator, he’s seen chomping up people in full view, and it looks amazing without any computer-generated effects. Teague directs a tight script by Sayles and the movie rises above its admittedly silly premise, even if doesn’t have to. But once again, why, why, why the hair? Alligator is proof that rugs, plugs, and wigs are necessary, at least when it comes to moving images.

There’s another 1980s curio called Seven Minutes in Heaven, written by Jane Bernstein and Linda Feferman and directed by Feferman, that proves romantic high school movies about high school students can’t be cast with actual high school-aged actors, because it feels weird. Seven Minutes in Heaven is not a lurid or suggestive movie at all, it’s warm and affectionate as an after school special, and as well-intentioned and ultimately lacking. Its frank depiction of adolescent romance and sexuality feels off compared to other movies and TV shows where older actors are playing characters that are the same age. These films remind us that “authenticity” is often anathema, from something as subtle as a haircut to something as serious as the depiction of adolescent sexuality. Buy a rug.