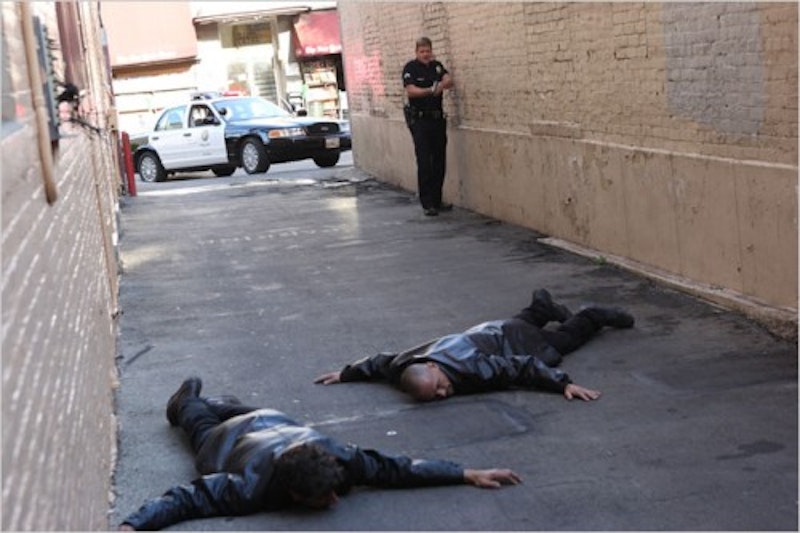 When last I watched Southland, C. Thomas Howell was an alcoholic downward spiral of a beat cop, Regina King was valiantly trying to keep a teenage witness alive, Michael Cudlitz was cozying up to a pal of the same gender, and it looked like Tom Everett Scott was toast. Then Southland itself winked out when NBC pulled the plug, and the show seemed destined to suffer the same fate as its spiritual predecessor, Boomtown. TNT swooped in and saved it, but I didn’t get back into it until last month.
(Boomtown, as you may remember, played merry hell with the Roshomon multiple-perspective concept; by contrast, Southland likes to open with a scene from later in the show, then spends the show explaining in a terse visual language what led to that cut-from-context scene.)

I’m still kicking myself for this, because the revitalized Southland is somehow better than ever. The over-abused hand-held filming technique is grating and dated, but here it feels fresh, voyeuristic, and reportorial, adding to the show’s desperately anarchic, anything-can-happen vibe. Network procedurals provide the impressions and precincts are static, that all cases occur in a vacuum where somehow five or six cops are trying to solve a single murder or two; Southland keeps slinging corpses and crimes wily-nilly, out of nowhere. Sometimes they’re connected; sometimes they aren’t. And, of course, the cops have their own problems, and since they’re on TNT now, the cops can openly swear about their problems and at one another—on NBC, profanities were pointedly bleeped.

Southland is set in Los Angeles, and watching its cameras glide and zip through whatever sets or locations are subbing for burned-out, apocalyptic territories and at-risk neighborhoods puts me in mind of parts of Michael Mann’s Heat. There’s no glamour to it, though, and no Law & Order partners-forever certainty. The detectives King and Everett portray no longer investigate cases together; she’s stuck with a jaded, snooping veteran (Arija Bareikis), he’s flat broke in the wake of a failed marriage and riding a desk for reasons I haven’t figured out. Beat cop Cudlitz plays mentoring, hectoring hardass to Benjamin McKenzie’s rookie hothead punk, yet each is withholding so much from the other that an instinctual trust fails to take root; there’s the sense that each man is too wrapped up in the perpetuation of an archetype to learn anything from his opposite number. Howell’s fresh out of rehab and spouting so much AAA jargon that his comrades miss the loose cannon he was on the sauce.
There’s an even balance between whatever’s going on case-wise and what’s happening in the characters’ lives without the sense that the creators are straining to make a huge point a la Grey’s Anatomy/Private Practice; instead, Southland tracks burnt-out law-enforcement officials doing the best they can in a world that they can’t save.

(Southland creator John Wells also had a hand in launching E.R., and the black comedic, sometimes dead-eyed tone that show maintained almost too relentlessly, a tone that made it difficult to connect to at times, is a trap Southland will have to guard against falling into as it ages and evolves.)

Cops slap other cops. Cops report for duty against medical advice and take part in shootouts. Cops bend the rules with fatal results. Cops ask other cops, at gristly murder scenes, if they’re game for weekend shopping trips. Cops wander unknowingly into quicksand, with fatal results. This is not a red herring—regular viewers will understand what I mean, as a long-time regular was dispatched recent with a casualness that felt almost callous; like Southland as a whole, it made for riveting, wrenching television, a punch to the gut I never saw coming.