Patient's Not Responding to Treatment 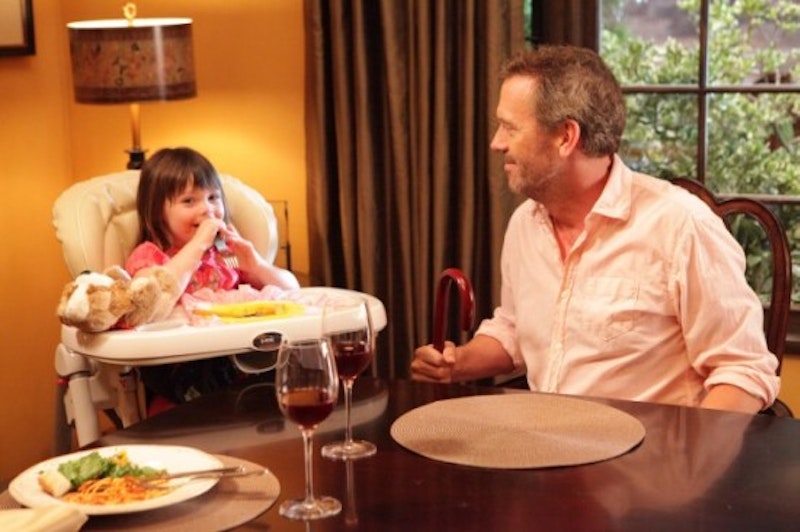 Yet another week with no new House episode. The mid-season break was already two weeks longer than last season, and now, a mere two episodes into the second half of season seven, we're left with another rerun. What exactly is happening at Fox production? I know that Olivia Wilde taking time off to film Cowboys and Aliens caused some problems, but come on.

Unlike a lot of my House-watching friends, I was a huge fan of season six. I've had this argument more times than I can count. After House is released from Mayfield Psychiatric Hospital at the end of 6x2, he tries to help those around him in his own way. That's what season six is all about; it's House-centric but not obviously so, which is part of its brilliance. Take, for example, 6x13, "Moving the Chains," when House hires Foreman's recently paroled brother as his assistant after Foreman refuses to pick him up at the airport. We find out all sorts of stuff about Foreman's past (which hadn't been dealt with at all since season three, when Foreman's Alzheimer's-suffering mother shows up in "House Training") and the whole episode is a nice mix of character backstory and family drama that still focuses on House's recovery. We also get two episodes unlike anything the show had done before, "Wilson" and "5 to 9," day-in-the-life episodes of Wilson and Cuddy, respectively. It's gimmicky, but it works.

But part of the problem with season seven is that, now that House and Cuddy are together (hence forth, Huddy), all of House's emotional conflicts are centered on their relationship, which is fine, I guess, if you'd always hoped they'd end up together, but I never did. I was way more comfortable with the jokey sexual tension they had in seasons one and two, back when Stacy was still around. And I know that seasons five and six featured some pretty serious Huddy scenes—all of the hallucination stuff at the end of five; the Thanksgiving dinner ruse in six, etc.—but nothing nearly so uncomfortable as the sex scene at the start of 7x1. Honestly, who wanted to see that?

And I'd probably be okay with the Huddy relationship if there were good storylines for the supporting characters, some other dramatic sub-plot to care about, but there's not; in fact almost nothing interesting has happened this season. Wilson and Sam broke up but Sam was barely around long enough for anyone to care; with Thirteen gone, Foreman doesn't have any kind of story; all of the Chase/Cameron stuff was resolved last season, and now Chase's only problem is that he's apparently too attractive; and the new med student is little more than a fill-in for Cameron. Cuddy tells House that she's some kind of genius, but she's yet to really show it, and do we really need another character with moral qualms about House's unorthodox methods? It's been done again and again: it's why Foreman left at the end of the season three, it was a huge part of season four, as House "interviews" for a new team, and it was the crux of Cameron's last scene with House in season six.

Then of course there's Taub, who's once again having problems with his wife, and I have to agree with Zack Handlen at the A.V. Club, nothing about this relationship makes any sense at all.

Why in the hell are these two still married? He cheated on her, he's trying to make up for it, he still wants to cheat. OK, he's a creep. But now she's having an "emotional affair" with some guy she met on the Internet, and Taub's going through her e-mails, and ... seriously, what is the point of this relationship? I can't tell if we're supposed to be rooting for them to make it work or if this is all some subtle criticism on people who stay together for no real reason but to punish each other and themselves. Either way, it's ridiculous and a major drag, and Taub's wife isn't really a person. She's just a machine that dispenses disappointment.
I can only hope that Thirteen's return late in the season will shake things up: God knows there was a big to-do when she left at the end of season six, but there's been almost no mention of her since 7x1, when we found out she was not in fact part of an experimental Huntington's drug trial. I mean, is Foreman concerned about her? Is anyone?