Using camp as a vehicle to explore a sexually open society. 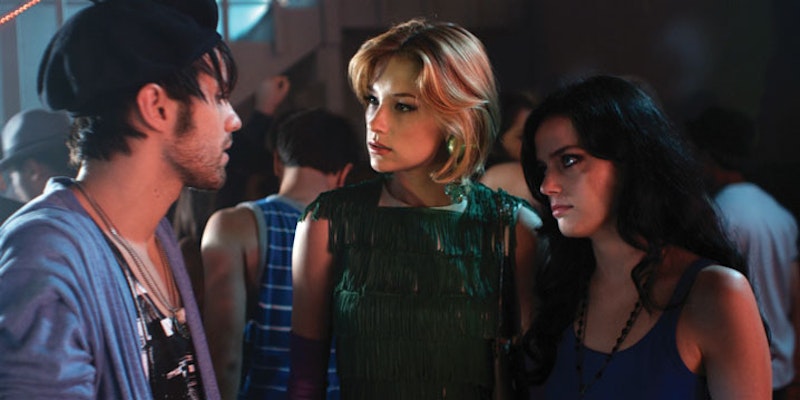 I first heard about Kaboom, the new Gregg Araki movie which I’m about to see for the third time, in the October 2010 issue of Vogue Paris—the one with Lara Stone’s fabulous breasts splashed all over the cover. Usually, I don’t care what the film critics have to say. But this time I read the little blurb and was totally enraptured. I love debauchery, especially when everybody involved is well-dressed and ripped and getting it on. And so when Vogue Paris described Kaboom as basically a “sucrerie hédoniste”—a hedonistic sugar factory—I was all, where do I log in?

The movie follows Smith, a soon-to-be-19-year-old college student who navigates relationships between his lesbian BFF, her crazy ass girlfriend, and (all) the people he’s sleeping with, including a girl named London; and he’s trying to figure out his parents' secrets. Then there’s Thor, his super hung roommate who’s named after “Thor,” the superhero comic with the huge hammer.

Laughter is important for a movie as camp as this—which does take itself seriously as a work of camp. When I saw it last Friday at the IFC in New York, I was laughing so hard I couldn’t see straight, and so was the whole audience. There’s one scene where London (she actually has a British accent) is getting head from a guy and she’s moaning and she’s all into it. But then she gets a strange look on her face because the dude’s like slurping at it. Like, slurping-slurping. So she’s all, What are you doing down there? And he’s like, Going down on you, baby. So she goes, It’s a va-gina not a bowl of spaghetti. Man, I lost it.

In those few seconds when you’re not laughing, you’re seduced by the movie as a complete visual and aural feast. Technically, Kaboom is not a long film, but there’s so much to look at in those 85 minutes that the movie feels a longer than it is. The clothes are exciting and pop really well against the placeless-anyplace of the college, and the amazing soundtrack makes you feel like you’re at some really scenester concert such as Cut Copy or Ladytron.

And then there’s the cast, which is obscenely gorgeous. You kind of want to sleep with everybody in the movie, regardless of gender. And that’s where Araki’s sly intervention steps in. Having a universally hot cast is more than just eye candy—you know, in case that $12 box of Skittles didn’t do it for you. It’s a rhetorical device Araki cleverly uses to mirror the world of ambisexuality in the film. Underlying the movie’s camp plot, Kaboom fantasizes about a world where everything sexual is fluid, where we don’t need labels, where you can be a “straight” guy and have sex with a guy because it’s rad—no homo. Watching the movie I kept thinking about all the people in the audience laughing and responding to the ambisexual subtext. What truths does the movie unveil about personal relationships? Are we laughing because it’s funny? Or is that an uncomfortable “Uh, that was my secret DL college experience” type of ha-ha?

A few months ago Dr. James Hicks, a prominent sociologist out at New York University, devised the Flexuality Test, a simple, fun-for-the-whole-family game that tells you how gay or straight you are. Nobody is 100 percent gay or 100 percent straight, so the thing goes. I actually came out ambisexual, which was really exciting because it means I’m attracted to both genders with equal frequency. Not really bisexual; you like everybody. Most people like to hold on to their sexual orientation with an iron first, but Kaboom shows a world where beautiful people can get together and have beautiful sex and still be like totally mellowed out. Unless, of course, your girlfriend’s a witch.

Sometimes I wish we could live in a world like that. And, you know, that’s why I’ll see the movie a third time. I mean, I’ll pass on the animal masks and everything. But it would be so awesome to have a society without labels, where people can just wear fabulous clothes and chill and be open to experimentation. At the screening I went to, Araki popped in for a brief Q&A. Naturally, somebody in the audience asked about “that whole hetero/homo dynamic,” leading Araki to go on about his experiences of going to Coachella, how the festival is just this exciting, debauched place full of young people or the young at heart in the middle of fucking nowhere, where everything goes, and where people are down for whatever.

It takes a lot of balls to experiment with the unknown, the taboo. But openness and a sense of discovery is what makes youth so compelling, isn’t it?