Ben Wheatley's Rebecca is a trite misfire, a blithe Daphne du Maurier adaptation already made into a classic by Alfred Hitchcock. 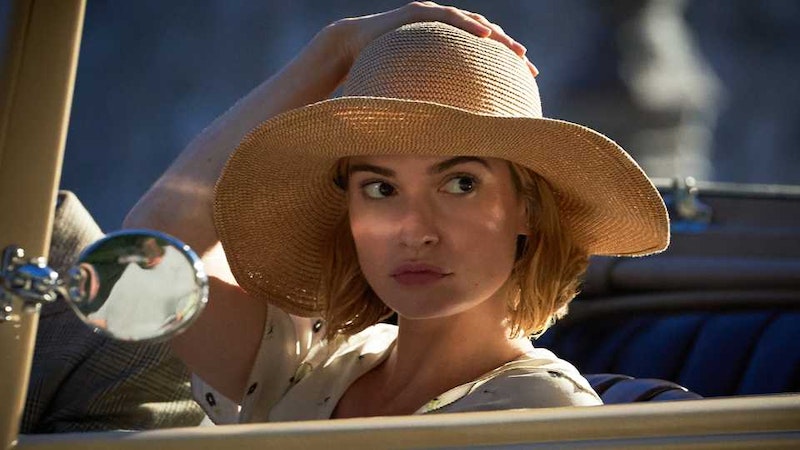 Making a new screen version of Rebecca, Daphne du Maurier’s still-celebrated 1938 Gothic novel, takes some nerve: you’re up against Laurence Olivier in top form as enigmatic widower Maximilian de Winter, the unforgettable Judith Anderson as the sinister housekeeper Mrs. Danvers, and Alfred Hitchcock casting his creepy spells in ravishing black-and-white. And yet people keep dreaming, to paraphrase the novel’s immortal first line, of going to Manderley again. British television tried twice, in 1979 and 1997. Now, there’s a new version from Netflix, directed by Ben Wheatley. I don’t know how it looks to younger viewers who aren’t keen on black-and-white classics. But even on its own, as an adaptation of the novel, this Rebecca is singularly pointless, though sometimes pretty.

Which is a shame because, for all its Hitchcockian magic, the 1940 Rebecca does leave room for more—partly because Hollywood’s morality code of the time required a significant alteration to the story’s dark plot twist. The Wheatley Rebecca could’ve kept du Maurier’s plot intact, and it tries—but lacks the nerve.

In some ways, Rebecca is an odd choice for a story to bring to screen at this cultural moment. The (famously nameless) point-of-view character is a very unliberated woman, even for the 1930s. A mousy orphan from a genteel background, she first appears as a “lady’s companion” bullied by her overbearing employer. Then, she’s swept off her feet by the equally overbearing Mr. de Winter, a handsome, rich, brooding man who recently lost his beloved wife in a boating accident (or so people say). Back at her new husband’s ancestral home, Manderley, the new Mrs. de Winter feels hopelessly outclassed by her predecessor, the titular Rebecca, renowned for “breeding, brains, and beauty.”

When our heroine does find her strength by the story’s end, it’s thanks to a twist that is, as some say nowadays, problematic.

Rebecca, it turns out, didn’t drown in her sailboat in a storm: Maxim killed her. (In the novel, at least.) After the boat’s found, he confesses to Wife No. 2 that he shot Wife No. 1 while she was taunting him about being pregnant with someone else’s child, and then sank the boat with her body in it. He also reveals that, far from still loving Rebecca, he “always hated her”; their marriage had been a sham in which she played the perfect wife while cavorting with a parade of lovers in her London flat—or, sometimes, in the Manderley boathouse—and he went along for fear of scandal. Wife No. 2 is too thrilled by the realization that Maxim never loved Wife No. 1 to care about the other issue.

Ultimately, Maxim gets away with murder, despite the discovery that the boat was deliberately scuttled: the surprise revelation that Rebecca had advanced cancer leads to a verdict of suicide. (Which it was, sort of—suicide by Maxim.) It’s ostensibly a “happy ending” for him and the second wife, though marred by Mrs. Danvers’ vengeful torching of Manderley. Such a conclusion can be easily read as misogynistic: the dead woman is punished for her freedom and rebellious sexuality, the living woman finds her identity in being assured of her husband’s love, and the man is excused for murdering his wife because the bitch had it coming.

But, of course, things aren’t what they seem—which is the overarching theme of du Maurier’s brilliant novel: just as the second Mrs. de Winter’s initial image of her husband’s perfect first marriage is an illusion, so is her own presentation of her and Maxim’s post-Manderley life, in a succession of sad hotels in continental Europe, as essentially happy. In a way, they’re now the ghosts.

The Hitchcock film had to find its way around the unpunished murder, so the screenplay softened Maxim’s confession: in the 1940 version, he admits only to drowning Rebecca’s dead body after she stumbled, fell and fatally hit her head during their final confrontation. It’s an explanation so ludicrous that a friend I introduced to the film a while back thought it was an obvious cover story for murder, which Nameless Wife pretends to accept. (If true, that would make the story even darker than du Maurier’s version!) I don’t think that’s what we’re meant to think; but for what it’s worth, after rewatching the 1940 Rebecca the other day, I think there may well be a subtextual suggestion that Rebecca fell because Maxim knocked her down (“I suppose I went mad for a moment; I must have struck her,” he tells the second wife), and that he somehow persuaded himself that she stumbled and fell on her own moments later.

It’s also worth noting that the 1940 film doesn’t shy away from the amorality of the second Mrs. de Winter's giddy epiphany, perfectly acted by Joan Fontaine: her exultant "you didn't love her!" and her fervent assurances of love come when she knows only that Maxim sank the boat with Rebecca's body and has every cause to think he's a murderer.

In the Wheatley film, Maxim admits to shooting Rebecca through the heart, but his account is tweaked so that she’s asking for it (“Pull the trigger and you’ll be free,” she says—according to him—and apparently even points the gun in his hand at her own chest). His responsibility is thus minimized, or at least we’re meant to think so. It’s a version that tries to find a middle ground between the novel and the 1940 film—and stumbles badly.

Worse, it then goes on to really amp up the happy ending. While the 1940 film leaves out the depressing details of life after Manderley, the second Mrs. de Winter’s wistful voice-over description of her dream of visiting the desolate shell of the mansion clearly suggests that she isn’t exactly basking in married bliss. The new movie ends with the couple waking up in bed, and then this gem of a voice-over from the Mrs.: “Last night I dreamt I went to Manderley again. I dreamt of Mrs. Danvers, and of Rebecca. But this morning I woke up and left the dead behind. And as I sit before the mirror in our stuffy little room in Cairo—just another stop on our quest to find a real home—I can see the woman I am now. And I know that I have made the right decision. To save the one thing worth walking through flames for. Love.”

This would be trite under the best of circumstances, let alone when “the right decision” made to save love is helping cover your husband’s murder of his first wife.

There are other problems, too. The blandly handsome Armie Hammer has neither the charisma nor the darkness for Maxim; when he’s called upon to be charming he’s vapidly pleasant, and when he’s called upon to be angry and menacing he’s merely petulant. (Olivier aside, Jeremy Brett was vastly superior in the 1979 BBC version; among current British actors, Richard Armitage, currently starring in the excellent Netflix mystery thriller miniseries The Stranger, would’ve made a fine Maxim.) Lily James’ Second Mrs. de Winter is pluckier than the Joan Fontaine version, but that makes her decisions even harder to explain. For some reason, in the opening scenes, the heroine’s employer, American socialite Mrs. Van Hopper, is upgraded from ridiculous, foolish and obnoxious to grotesquely loathsome; since she’s played by Ann Dowd, of Handmaid’s Tale “Aunt Lydia” fame, we half expect her to break out the cattle prod. The one standout in the cast is Kristin Scott Thomas as a gloriously creepy Mrs. Danvers, who can give Judith Anderson a run for her money; but her presence only makes one crave a better Rebecca around her.

Some half-baked attempts have been made to “modernize” the story: for instance, Maxim and future Wife No. 2 actually have sex (on the beach) during their whirlwind courtship. Fine, but then why keep the dialogue in which, after Maxim asks the smitten young woman if she wants to come with him to Manderley, she replies, “You mean, you want a secretary or something?” In this context, it sounds jarring and bizarre. An attempt to give Wife No. 2 a more active role near the end results in an equally bizarre sequence in which she tries to steal a document which she thinks will establish Maxim’s guilt, but which actually exonerates him.

One would’ve thought that a 2020 adaptation of Rebecca might play up some feminist themes—for instance, suggesting that Maxim isn’t necessarily a reliable narrator and that Rebecca may have been maligned. This was the premise of Sally Beauman’s revisionist (and generally poorly received) 2001 novel, Rebecca’s Tale. I think a pro-Rebecca reading of the novel is a stretch; it brushes aside too many details, not coming from Maxim or his friends, which suggest that she’s a rather awful person. (We learn, for instance, that she has been terrorizing a mentally disabled local man who saw her in a compromising situation by threatening to have him sent to “the asylum” if he talks.)  Still, it’s a potentially interesting take.

In the Netflix version, feminism does briefly rear its head when a defiant Mrs. Danvers declares that Rebecca thought of her lovers as “playthings” and then adds, “And why shouldn’t a woman amuse herself? She lived her life as she pleased, my Rebecca. No wonder a man had to kill her!” (In the book and the 1940 film, Mrs. Danvers simply insists that Rebecca “had a right to amuse herself” by taking lovers, with no generalized statements about women.) But this theme, like the rest of this Rebecca, goes nowhere. Rebecca’s still the malignant ghost, and Danvers the live (but soon to be dead) villain.

A feminist reimagining of Rebecca probably would’ve struck me as an annoying attempt to pander to “politically correct” fashion. But even that is better than vapid and pointless.

Du Maurier’s Rebecca continues to fascinate because of its morally treacherous terrain. A masterpiece of non-supernatural terror, it toys with the reader’s sympathies, coaxing us into rooting for a criminal and his ex post facto accomplice. It tells a story of anxiety and obsession rooted in insecurity and uncertainty, of the intricacies of illusion, reality, and self-deception. Despite its concessions to the Hays code, Hitchcock’s Rebecca succeeds in capturing all of that. Could a new retelling of the story work? Of course. But Wheatley’s Rebecca is a missed opportunity.