Hanging on Tabs and Chads

537 Votes, with the exception of the overuse of late night comedy, is an entertaining treatment of the 2000 Florida recount. C 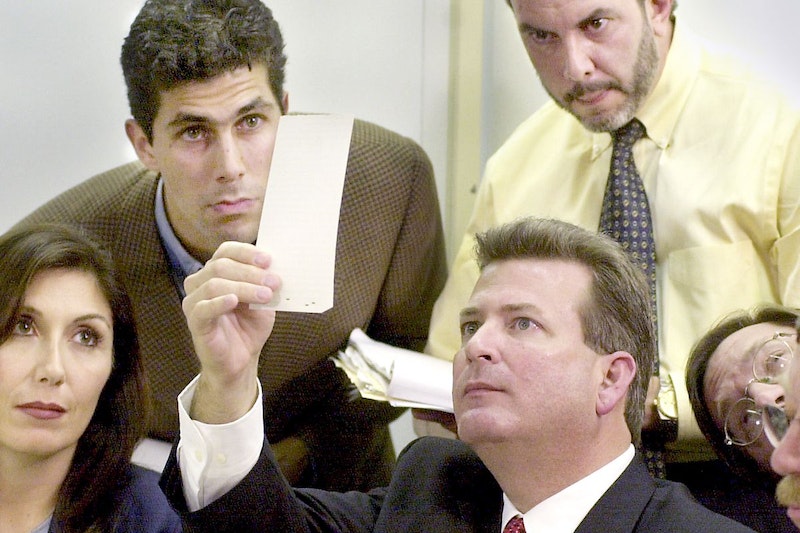 No documentary filmmaker is as dedicated a chronicler of South Florida sleaze as Billy Corben. Corben made Cocaine Cowboys, as well as multiple "30 for 30" documentaries about different eras of the University of Miami football program. Most recently, Corben made Screwball, a raucously entertaining doc about the Biogenesis scandal, which entailed the bust of a Miami-area lab that procured performing enhancing drugs for Alex Rodriguez and other top baseball players.

Therefore, Corben would seem the ideal filmmaker to revisit the 2000 Florida recount battle, with a specifically Miami focus. This is especially the case as those events reach their 20th anniversary, and there are once again fears that the current presidential election could devolve into an ugly court battle. The resulting film, 537 Votes, debuted late last week on HBO, and remains available to stream on HBO Max. It's entertaining doc, but it makes some choices that are head-scratching.

The documentary spends its first third providing a blow-by-blow of the Elian Gonzalez affair, the reaction by Miami’s Cuban-American community, and its effect on presidential politics in that election year. Then we get to election night and the multiple calls and un-calls of Florida. Most of the second half is about the recount battle, especially the "Brooks Brothers riot" in Miami that stopped the count in the Miami-Dade County and, 537 Votes convincingly argues, ultimately cost Al Gore the presidency.

The conclusion resonates in the Trump era: In the recount fight, the Democratic side positioned themselves as gentlemanly guardians of institutions and norms, while the Republicans played to win. And the institutions, in this case the various county canvassing boards, were overrun by the norm-breaking from the GOP side.

Also, viewing the clips at a distance, the caricatures of both presidential candidates were essentially right on. Bush was a slow-witted nepotism case, and Gore was unnaturally robotic on the stump—see my colleague Crispin Sartwell's classic essay, "A New Refutation of the Very Possibility of Al Gore."

The main villain is Alex Penelas, then the young mayor of Miami-Dade, who’s depicted as an ambitious pol who repeatedly backstabbed his fellow Democrats, including no-showing a planned event where he was to endorse Gore. Penelas is not interviewed, nor are the candidates or any of the top strategists of either campaign. The main talking heads include various Miami pols, as well as disgraced ex-CNN anchor Rick Sanchez and, of course, Roger Stone, who’d probably rather die than miss an opportunity to appear in a documentary. At one point, Stone and GOP strategist Brad Blakeman take shots at one other over which of them should properly get credit for the Republican operations that delivered Florida.

Corben has always been talented at cutting together relevant footage, and here he combines the interviews with old news clips, including the moments of Tim Russert with the dry-erase board on election night. But Corben makes one odd mistake: After virtually every beat of the saga, he feels the need to cut to the corresponding clip from either Saturday Night Live or The Daily Show with Jon Stewart.

Doing this, for documentaries on recent events that touch on politics, can be amusing. But in 537 Votes, there's too much of it, with Stewart's jokes essentially functioning as a laugh track for the proceedings. HBO already did all this with Recount, the 2008 TV movie that expertly dramatized the 2000 Florida battle, with Kevin Spacey starring as Gore lawyer and possible future Biden White House Chief of Staff Ron Klain; if you only have time to watch one of the two, go with that one. 537 Votes, with the exception of the overuse of late night comedy, is an entertaining treatment of a particularly notorious chapter. I just hope we're not headed for a sequel.