There's a lot to like about Don't Worry Darling, even if it is flawed. 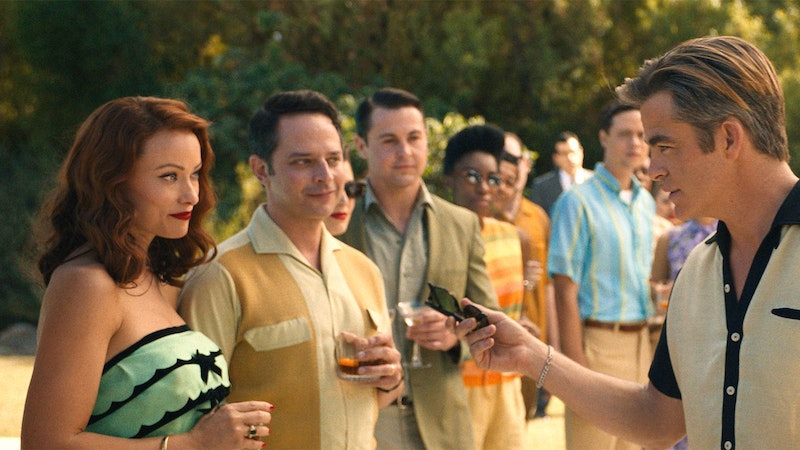 At some time in its development Don't Worry Darling might’ve had a pretty good script. But some bad choices were made along the way. Don't Worry Darling is the second movie directed by actress Olivia Wilde, following 2019's Booksmart, a critically acclaimed teen comedy with a vocal fan club among coastal elite types, but was nevertheless a box office disappointment. It's the only movie ever made in which the heroines had Elizabeth Warren stickers on their cars, and the movie was a hit among people who voted for that candidate. Come to think of it, that film's release and Warren's campaign had several parallels.

Wilde shot for the stars with her follow-up, which was reportedly the subject of a massive bidding war. The weeks of headlines about various romances, casting replacements and feuds among the cast have positioned Don't Worry Darling as a disaster of Heaven’s Gate/Ishtar proportions, but the arrival of the film is anticlimactic. In fact, there's a lot to like about it, starting with one of the year's most impressive production designs, an intriguing premise, and a characteristically strong turn from lead actress Florence Pugh.

But the two major male performances are zeros, the trajectory of the plot is a mess, plot strands go nowhere, the third act is full of escalating twists that don't work, and the ending is abrupt and unsatisfying. In the film, written by Katie Silberman, Carey Van Dyke and Shane Van Dyke, Pugh and Harry Styles play Alice and Jack, a sexy young couple who live in Victory, a prefab community in what resembles 1950s California. He's a Company Man, working for a mysterious outfit led by Frank (Chris Pine). They first appear very much in love, as demonstrated by an early, memorable sex scene on a kitchen table.

All the men in town (including Nick Kroll, Ari'el Stachel and Douglas Smith) seem to work for the company, while all of their wives (Wilde herself, Gemma Chan, Kate Berlant) stay home. The first person to notice something awry is Margaret (If Beale Street Could Talk's great KiKi Layne), and the way her plot is dealt with is the first of the movie's many big disappointments. We realize early on that something nefarious is going on, and it takes the characters time to catch up. What sounds like business motivational jargon quickly takes a turn into something that looks more like fascism. And Pugh, who’s reportedly so furious about the film that she's refusing to promote it, nevertheless shows emotional range that's reminiscent of her great turn in Midsommar.

On the other hand, Harry Styles isn’t up to the task of the some of the dramatic acting this movie requires. The audience I saw the movie with—fans of his, presumably—laughed at his big monologue, a scene not meant to be funny. Styles and the director are said to be dating, but I'm not one to say how much that has to do with the performance; after all, Cybill Shepherd wasn't bad in The Last Picture Show. But Chris Pine isn't very good either. This role required a certain degree of malevolence that he's lacking.

Don’t Worry Darling is a movie about the hidden darkness beneath the veneer of 1950s Americana, which is a well-worn subject. And despite looking absolutely great and featuring a fine lead performance, Don't Worry Darling will likely end up remembered more for the behind-the-scenes chaos than for anything that happens in the movie.