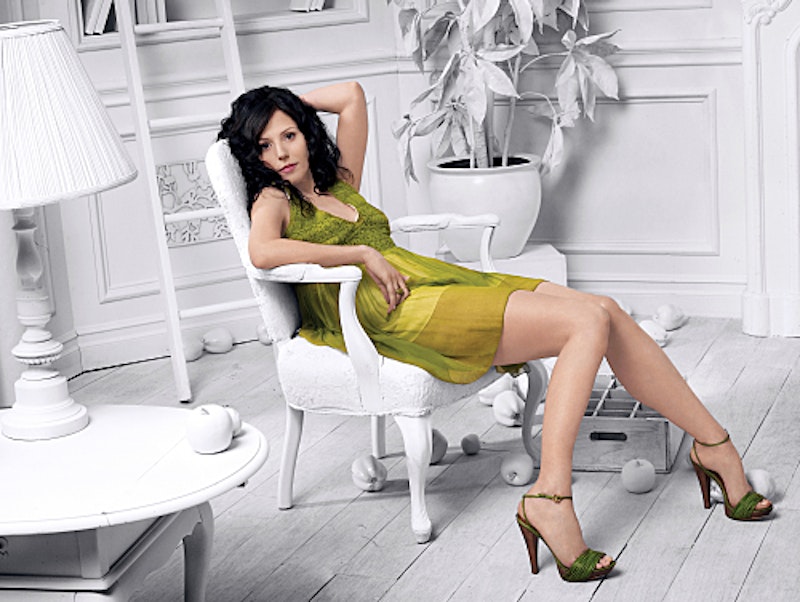 The other day I was eavesdropping on my teen daughter and her friends who were having an impromptu campfire gathering in my backyard. I wasn’t stalking, just a quick sniff-by to make sure there weren’t any odiferous herbs being enjoyed which would mean that a.) the neighbors would call the cops and b.) they weren’t sharing.

I was surprised to discover they were talking about what their parents watch on TV. Mentions of Entourage, 30 Rock, Mad Men and other popular shows wafted up to the second story porch where I was lying flat on my stomach like some kind of housewife ninja. I braced myself because I knew eventually my teen would need to chime in her mom’s favorite shows, and then I heard them.

Neither show is one I imagined the teens ever heard of, and both are lesser-known indie-esque dramedies. But I love them both. (And I did hear one of the other teens say they caught an episode their mom was watching and that Nip/Tuck has graphic sex!)

First of all, I am completely addicted to “Netflixing” tv series instead of watching them on regular, I-can’t-stay-up-that-late TV and I apparently am the only person in the universe who does not have Tivo or DVR or whatever. Once you have received entire series on DVD that you can just drop in the mail when you’re done, to me there’s no going back to commercials. And you can “stalk your queue” so that your movies and shows are ranked in the order you want to receive them—control freak entertainment perfection.

I guess I really should move to the Tivo/DVR thing, but honestly I like hiding in my bedroom with a mini-DVD player under my bed and ear buds and watching my two favorites, which yeah, are Weeds and Nip/Tuck. I’m watching the final season of Nip/Tuck right now and I’m sad it’s over. What a fantastic show. There are exactly 100 episodes over the six seasons of the dramedy about plastic surgeons, their patients, families and heartaches. It did win a Golden Globe for best drama series, but never the Emmy, which is a shame, because the writing is fantastic.

My favorite show in terms of characters and writing is Weeds. Currently in its sixth season, the Showtime series stars Mary Louise Parker and is the story of a widow who sells marijuana in her subdivision to make ends meet for her kids. Writer/creator Jenji Kohan to me is a brilliant mind, and her show never fails to leave me laughing, gasping, at times even crying, and basically just wanting for more.

To me, once you’ve fallen in love with an edgy, well written tv series, it’s hard to go back to a network sitcom with its canned laughter in the background. I also love Comedy Central stuff—The Daily Show is my number one haunt, along with Tosh.0—I can’t make myself fall in love with Stephen Colbert, but he seems to be in love with himself enough for all of us. I tried to watch Mad Men, but I couldn’t get past the extreme sexism. I mean, I get that it’s a period thing, but a glorification of mistreatment of women isn’t cool, even in retrospect to see how far we’ve come, baby.

What about you? Do you like an edgy, well written dramedy? Tell me which ones I am missing, so I can Netflix them all up in my queue.

Or, I could take notes from the teens while I’m in housewife-mom-ninja mode.