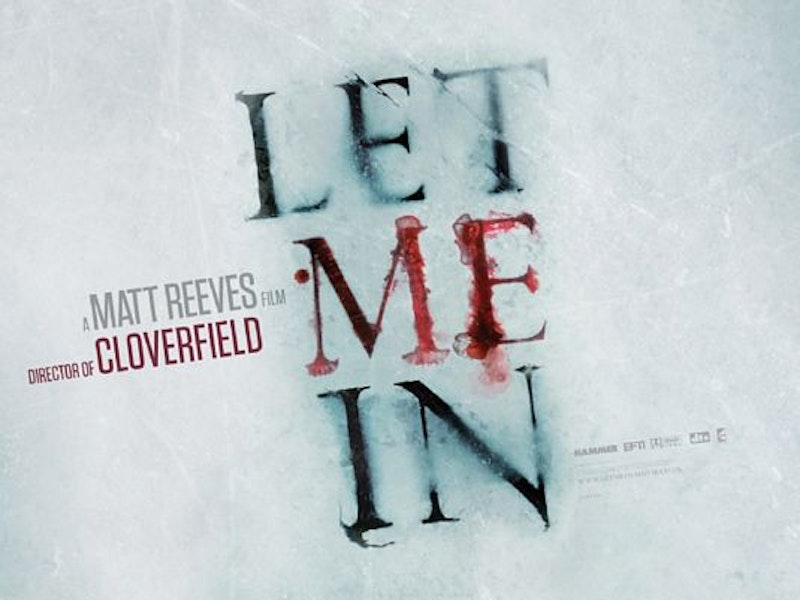 By most accounts, writer/director Matt Reeves’ Let Me In is worth the trip to the movie theater; it currently boasts an 87% freshness rating at Rotten Tomatoes, and reviews for the coming-of-age/vampire film—a remake of the 2008 Swedish flick Let the Right One In—have generally been positive, with Roger Ebert remarking that “Reeves understands what made the first film so eerie and effective, and here the same things work again.”

Yet the last part of that sentence points up what the Boston Globe’s Ty Burr made explicit: “It’s an honorable attempt, but there’s still no genuine need for this film to exist.”

Any true cinemaphile will have already seen Right One, a highly effective chiller that works both as a smart look at the difficulties of fitting in—whether you’re an easily bullied school kid or, you know, a vampire—and as a steadily-building work of suspense, whose climactic scene in a swimming pool is memorable for being so artfully shocking. When it was revealed that Reeves was taking extra care not to mess with what made Right One right, moviegoers who’d already seen the original figured, Why bother?

So it was that the film finished a distant eighth at the box office in its opening week, trailing such insta-flops as You Again and the long-shelved Renee Zellweger product Case 39, and just barely finishing ahead of M. Night Shyamalan’s latest “thriller,” the demonic elevator tale Devil. Despite Ebert’s assurances, the same things did not work again.

“Why are remakes necessary?” is one of the oldest complaints made by moviegoers, though it hasn’t helped break studios of the habit. “To make a quick buck” seems to be the easiest reply; certainly it’s atypical to try and make a superior film.

The trick seems to pay its biggest dividends in the horror genre, where name recognition (The Texas Chainsaw Massacre; The Hills Have Eyes) and a modest budget rather than name actors can put you over the top. John Carpenter has certainly learned this lesson, as he’s watched most of his early filmography get remade in recent years: Assault on Precinct 13 (05/76), The Fog (05/80), Halloween (07/78), and the still-to-come Escape from New York (81) and prequel to The Thing (82)—itself, of course, a remake of the 1951 classic. Perhaps this is all karmic payback for Carpenter’s own pallid 1995 remake of 1960’s Village of the Damned.

Still, Billy Wilder had it right when he said, “Why remake great movies? Why not remake movies that didn’t work and do them better?” Of course, anyone who’s sat through either the original or the remake of The Amityville Horror (05/79), Friday the 13th (09/80), or Piranha (10/78), not to mention the very flawed 1995 remake of Wilder’s merely flawed 1954 Sabrina, might disagree with that premise.

And still the remakes come. The Johnny Depp/Angelina Jolie action comedy The Tourist, opening December 10, has a vaguely entertaining trailer and a general unfamiliarity with its source, the 2005 French film Anthony Zimmer, going for it. The Coen Brothers, having bombed badly with the Tom Hanks-starring Ladykillers, are back at it with True Grit, promising a film that will be more in line with Charles Portis’ original novel than the sometimes over-baked John Wayne ham of the 1969 version. The trailer for the film, which opens on Christmas Day, looks like a practical shot-for-shot redo of the original, though Jeff Bridges seems to be leaning more towards Wild Bill than The Big Lebowski: