Wall Street: Money Never Sleeps is, incredibly, a reminder of a simpler time in America. 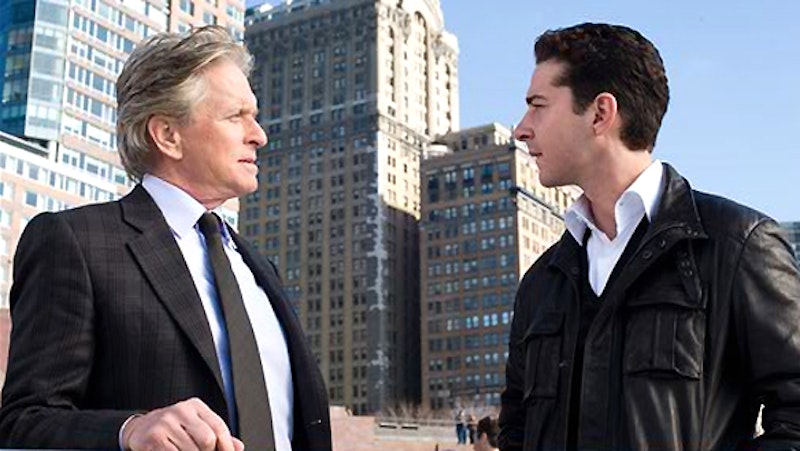 Oliver Stone is a borderline lunatic, Michael Douglas is Dead Man Walking and Shia LaFrouFrou is a lightweight actor, but it’s hard to imagine that anyone who saw, and enjoyed, 1987’s Wall Street (a cinematic period piece that was put in the same time capsule as Tom Wolfe’s Bonfire of the Vanities, an issue or two of Spy magazine and the abhorrent lynching of Robert Bork in the U.S. Senate) would leave Wall Street: Money Never Sleeps anything but satisfied. It makes no difference that Stone’s plot is muddled, and the shimmering Manhattan skylines and scenes of ostentatious wealth-dripping socialites at charity events ring false in this era of downsizing. The financial chaos of 2008, and its resulting economic nightmare, gave Stone the opportunity to make a sequel to the 23-year-old original, and close a chapter on a riveting fictional story.

I’ve watched Wall Street on DVD a couple of times over the years, and, just as it’s interesting to discover what became of a high school or college classmate you haven’t seen in 30 years, the sequel was an entertaining two-hour diversion to catch up with Gekko and, inevitably, remember what the world was like in 1987. The original film had the misfortune of starring Charlie Sheen, a horrific actor, as the young man torn between an illicit gateway to millions and, as unbearably earnest journalists might say, “the better angels of our nature,” represented by Jiminy Cricket stand-in Martin Sheen. (I’ve always thought that the casting of Sheen was Stone’s major mistake in Wall Street, whereas the young John Cusack would’ve been perfect as the clever but only marginally bright Bud Fox.)

Perhaps you’ve seen the film, read its mixed reviews or couldn’t escape the rounds of interviews that cancer-patient Douglas gave in the run-up to Wall Street Dos’ release, so a detailed summary of the storyline (or, as everyone in the world now says, the “narrative”) isn’t necessary. Quickly: Gekko’s released from jail after a lengthy eight-year sentence—rather implausible, considering that Ivan Boesky (one of Gekko’s real-life models) did a cameo in prison. Gekko’s estranged daughter is coincidentally romantically involved with LaFrouFrou’s ambitious but idealistic trader Jake Moore; the excellent Frank Langella plays Moore’s mentor at Keller/Zabel (a stand-in for Lehman Bros. or Bear, Stearns) who jumps in front of a subway train rather than face the indignity of his firm’s collapse; the greasy Josh Brolin (terrible in Stone’s half-baked W) is the new and far wealthier version of Gekko, playing the back-stabbing and impossibly gauche Bretton James, with whom Moore hooks up merely to exact revenge for Zabel’s suicide; Gekko weaves in and out of moral and immoral moments, but all ends well, as the credits roll with the one-year birthday party of his grandson on a condo deck, and everyone’s smiling, washed over by a brilliant blue sky.

I suppose the conclusion is meant to lead viewers into believing that Gekko has achieved a measure of humanity, and that he, Winnie, Jake, and Baby Louie, will go on to lead happy, productive and very affluent lives. Or not. It doesn’t really matter since this was Stone’s last stab at the Wall Street franchise, and now his job is complete.

Not surprisingly, given the yucky subject matter, Wall Street: Money Never Sleeps was slapped around by critics. The New Yorker’s Anthony Lane, normally quite astute, was typical in his pan, writing that Stone was more interested in “Olympic levels of dick-swinging” than an accurate portrayal of the finance industry; in addition, Lane feels compelled to say “Main Street” is left out of the film, and that “there are no little people worthy of the camera’s attention.”

What I found most surprising about Lane’s review was his opening, when asking readers what they remember about the original Wall Street. He says: “In my mind’s eyes, I see chunky cell phones, a couple of Sheens arguing next to an elevator, and a tall blond blur that must be Daryl Hannah, but the rest of the movie has burned away like fog.” I don’t quite believe that Lane remembers “chunky cell phones,” since cells, at least to “little people” like him and me, didn’t hit mainstream consciousness until the mid-90s, but maybe he’s a gadget geek. Wall Street was, in fact—for lack of a better word—a “zeitgeist” movie, like The Graduate, Gran Torino, Easy Rider and another Michael Douglas vehicle, Falling Down. It was released at the end of ’87 (but filmed before the October crash of that year), and was a cartoonish representation of those “go-go” years of yuppies, Ronald Reagan, venture capitalists and media properties swapping hands every other week. Here’s what I remember from Wall Street: Gekko’s horizontal striped shirts designed by Alan Flusser; money-dripping scenes in the Hamptons; pushy real estate agents flipping properties like burgers; Bud Fox eating steak tartare with his new mentor at a tony restaurant; and lots of ostentatious art and champagne. Gekko wasn’t as complex as Wolfe’s Sherman McCoy, but Wall Street is hardly a “blur.”

There’s a class reunion feel to this film, one that’s kind of wistful for those who were feeling their oats back in ’87. Sheen makes a quick appearance as a doughy Bud Fox, who made millions after a wrist-slap stay in the hoosegow; crazy-hair Graydon Carter, then editor of Spy, now helming Vanity Fair, has a bit part in a scene at a charity function where he reels in horror as Gekko attempts to say hello; and Douglas, so flashy and vibrant in the original film, is stoop-shouldered and haggard, as one would objectively expect 23 years later. David Byrne contributed much of the film’s score, and this too, was jarring, for his new songs felt like third-tier work from the former frontman of Talking Heads. This was painfully evident as the film ended and Byrne’s “This Must Be the Place (Naïve Melody),” released at his peak in 1983, played as the credits rolled.

Additionally, it was curious to see Wall Street II and The Social Network within the same week. I had high hopes for the latter, the eagerly-anticipated story of Facebook founder Mark Zuckerberg, which were only heightened by The Wall Street Journal’s usually spot-on Joe Morgenstern’s rave review last Friday. He writes: “Yet [Jesse] Eisenberg’s performance feels like revealed truth while you’re watching it, and, given the pace of change that the story reflects, his character will enter the culture as a consecrated archetype by tomorrow evening [Oct. 2] at the latest.”

Eisenberg was, in fact, extraordinary in the film, and will probably end up with any number of Best Actor nominations at year’s end. But while The Social Network was an engrossing and at times hilarious business story, it didn’t encapsulate on film the Facebook era nearly as accurately as Wall Street did for a vastly different culture a generation ago. I think Morgenstern got carried away by an over-enthusiastic reach to connect with a phenomenon he (he admits he’s a “cautious” user of Facebook) was late in discovering. So was I, and so after the film I asked one of my teenaged sons, a steady Facebook user for several years, if The Social Network was slated for iconic status among his generation. He liked the film, too, but said no, it would be quickly forgotten.