Pull Up the Roots 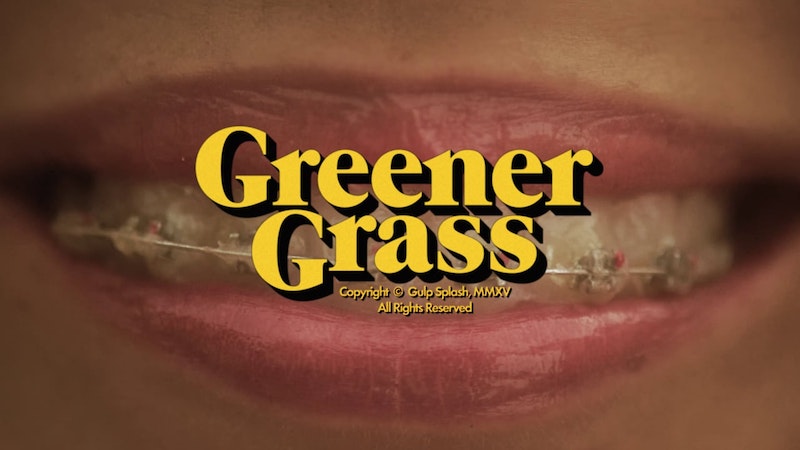 What is Greener Grass but a beguiling Saturday Night Live sketch stretched out to 100 minutes? Mildly funny, offering a bland brand of the bizarre, and a punishing dearth of comedic imagination in this long, long movie. What is the social critique? Suburbia breeds conformity? Society places unrealistic and sadistic expectations on women? Children are as disposable as consumer products? All of this has been covered thoroughly by David Lynch, John Waters, and Tim Burton, three filmmakers writer director duo Jocelyn DeBoer and Dawn Luebbe have cited as influences and active inspirations, with Twin Peaks playing while they worked on the script for Greener Grass. But more than Lynch and Waters, this feels like an Adult Swim movie, and very UCB: the awkward and the random being inherently funny.

In the suburbia of Greener Grass, everyone wears braces, gaudy pastels, drives golf carts, and operate in a bizarre situation where Minnesota Nice is taken to the extreme: Jill (DeBoer) is a soccer mom just like Lisa (Luebbe). Jill has an infant daughter named Madison. Showing her off at a soccer game, Lisa marvels, and Jill gives her the baby out of a compulsion for politeness, a decision she immediately regrets. Soon after, she runs into Lisa and Madison (now Paige) and asks for her baby back. Lisa refuses. She chides Jill for saying “Indian Giver,” and approves the correction “Native American Giver.” This is the level of the jokes here: rock fucking bottom.

This movie runs on the fumes of Waters and Lynch, whose particular critique of Americana—that at once embraced and defamed American culture and kitsch—has been copied and recopied and incorporated into all forms of media for over 30 years now. It’s as innocuous and obvious a critique as any of the banal observations uttered by the idiot citizens of Greener Grass about the weather or how many layers are in a taco dip.

Luebbe: “I would say the movie is probably 95% scripted, so it was pretty close to the script. There were a number of improv moments in the final cut that we absolutely loved. One of my favorite lines in the movie is when Kim Ann is sitting on her porch and Jill arrives and hands her a taco dip and Kim Ann asks ‘is it seven layers?’ and Jill admits it’s only five and Kim Ann says ‘put it on the floor!’ That line is totally improv’d by Mary in the moment. She’s just a dream.”

Some dream: beyond the obsession with public access television production values, awkwardness, and a time warp that renders all technology stuck in the 1980s, Greener Grass strains to find humor beyond its rictus like characters and how “Lol random” everything is. A movie about a pastel vomit-colored society whose code of etiquette is so strict and perverted that a mother complimented on her baby is compelled to then give away her baby should have more to say, or at least more going on than “Isn’t this crazy?” Greener Grass asks nothing: of us, of America, or of capitalism.

The characters are obsessed with material objects and superficial status symbols. That’s it. The critique does not go beyond a fake SNL commercial. This movie is not transgressive or subversive and says absolutely nothing new. Beyond the often-striking cinematography by Lowell A. Meyer, what’s left? The UCB mindset: "lol random!" That's all that Greener Grass has, and maybe it's for you. A more uncharitable assessment would point out all the better movies that have covered this ground already: Heathers, Clueless, Blue Velvet, Female Trouble. In all, a movie best left on a dusty VHS tape in the background of some production designer’s cage.