Written on the Wind (1956) is more than a spectacular splat of technicolor puke; it’s a fun-filled, cursed family saga that American cinema is particularly good at. 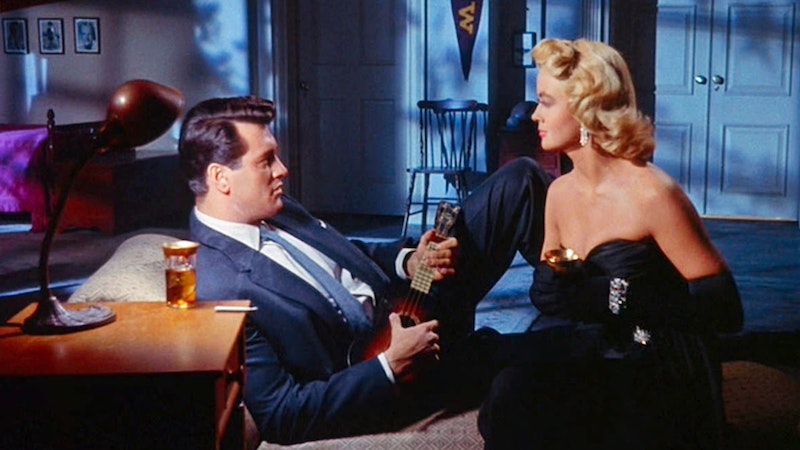 The siblings in Douglas Sirk’s Written on the Wind (1956) suggest a few themes about post-war American life. They’re screwed-up, unloved hedonists hellbent on self-destruction. This fact alone you’d think would put a moratorium on the idea that the 1950s were wholesome. The Hadleys have a surplus of oil and influence, but Kyle and Marylee have had it,  (Hadley = get it). Blame Lauren Bacall to some degree. Her Lucy character turns up to do PR for Hadley Oil and she’s just too sensible for their kind of truculence. She catches Mitch’s eye; Mitch is Rock Hudson, a rock-solid geologist and the son Mr. Hadley never had. Kyle’s the son he wishes he never had (Robert Stack, in what might be my favorite performance ever). It’s fun to imagine what Sirk’s brief was: “Play like you’re 10 and adept at making martinis. You’re also a walking nightmare who breaks lots of things with terror in your eyes. Okay Bobby?”. Kyle immediately weasels in on Lucy, frustrating Mitch.

All of this would mean less if it weren’t for the feeling that Kyle and Mitch love each other like brothers. In the face of high camp, it makes the ensuing meltdowns heartening. Kyle flies Lucy to Miami, dines her, doesn’t wine her because this Hadley’s a raging alcoholic. She’s skeptical of him because she’s not stupid. Still, he excites her with money, she sobers him, fills him with compassion. And about that pistol he keeps under his pillow? He tosses it in the ocean. Meanwhile, Mitch is seriously considering moving to Iran. Found anybody special? the dad asks Mitch. The geologist groans: “I even have trouble finding oil.” “What about Marylee?” the dad asks.

Dorothy Malone’s wild Marylee appears in the second act, lashing up a tabletop with a can opener at the hayseed corn whisky bar when Kyle and Mitch arrive to save her from the clutches of a gross guy. Guns are drawn and fists fly. Kyle’s predictably hapless. On the wrong end of every punch, as Marylee gleefully informs Lucy later. It was Mitch who’d stepped in. Marylee winked at him. “You do care…” She’s had a flame for him forever, but she’ll never have him, so she uses random sex to relieve her of the anger and the boredom.

Meanwhile, Kyle and Lucy are trying to have children. Their efforts are abysmal. Then one night, there’s a party at the mansion. Kyle sees Mitch smoothly dancing with Lucy. Kyle’s reminded of his inability to fulfill his duty as a man. Mitch, who could help him in that department, goes upstairs to brood in the shadows. Marylee busts in, throwing her lips at Mitch, who does nothing. Now she’s frustrated, squealing off in a car running on empty. She fills more than her tank with the gas station attendant, comes home, cranks up some mambo music, yells “I’m filthy—period!” and begins to dance. She’s so loud her dad clutches his chest, falling down the stairs to his death. By this point, Kyle is convinced of his sterility, falling off the wagon beautifully. “A toast to beauty and truth, which is anything but beautiful.” Oh, Kyle!

Written on the Wind is more than a spectacular splat of technicolor puke; it’s a fun-filled, cursed family saga that American cinema is particularly good at, with the perverse energy of potboiling, pure comedy. It’s also a romance that asks the question, what love in this hellhole? Amid cocktails, gunfire, and hysteria, there’s Bacall and Hudson standing above the feral fray with their marbles strangely intact.